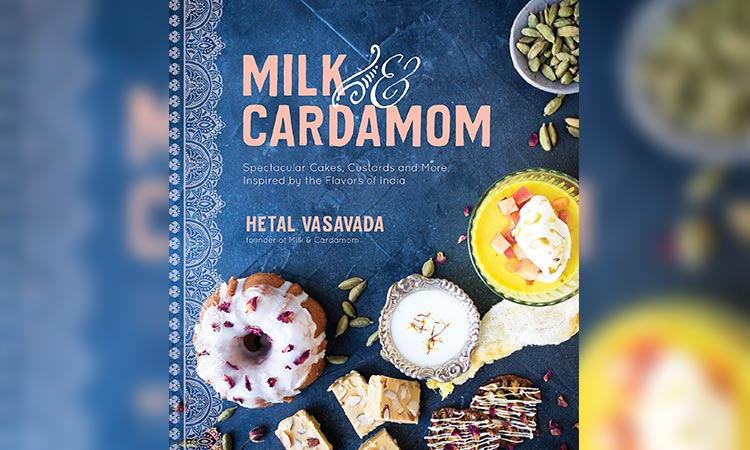 Chef and recipe developer Hetal Vasavada grew up as a first-generation Indian-American in New Jersey. The sweets she ate as a child were traditional Indian biscuits, puddings and frozen desserts. As an adult living in San Francisco, she started experimenting in the kitchen and eventually began creating dishes that she said represented her own background — “not 100% American and not fully Indian.”

She competed with her recipes on Season 6 of “MasterChef” in front of Gordon Ramsey and started her own food blog, Milk & Cardamom. Now, in her first cookbook of the same name, “Milk & Cardamom,” Vasavada shares her Indian-inspired recipes for sweets that range from traditional desserts like Besan Brufi, a chickpea flour fudge, to cultural mash-ups like Matcha Tapioca Pudding and Mango Lassi French Macarons.

She says this kesar pista kulfi (a no-churn ice cream) was a favorite childhood treat when her family went shopping at an Indian grocery store in Edison, N.J.

In this recipe, I added kesar mango puree, which you can buy at the Indian grocery store. But if you don’t have one nearby, you can blend up an Alphonso mango.

Warm the milk in a small saucepan or a microwave until it is lukewarm, about 10 seconds in the microwave. Add saffron, stir and set aside.

In a large mixing bowl, add heavy whipping cream and whisk on high for 3 to 4 minutes until there are soft peaks. Add sweetened condensed milk, mango puree, saffron milk and salt and whisk again on high for 5 minutes. Coarsely chop the pistachios and fold into the ice cream mixture. Pour the mixture into a container, cover, and freeze overnight before serving.