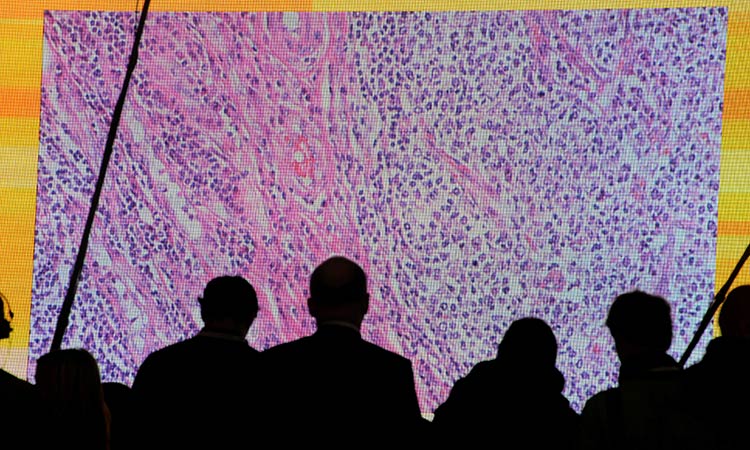 Cancer cells are seen on a large screen connected to a microscope at the CeBit computer fair in Hanover, Germany. File/ Fabian Bimmer/ Reuters

Heart disease remains the leading cause of mortality among middle-aged adults globally, accounting for more than 40 per cent of deaths, the data showed.

It was thought to have been responsible for around 17.7 million deaths in 2017.

But in richer countries, cancer now kills more people than heart disease, according to the twin studies published in The Lancet medical journal.

Publishing the findings of two large studies in The Lancet medical journal, the scientists said they showed evidence of a new global "epidemiologic transition" between different types of chronic disease.

"Our report found cancer to be the second most common cause of death globally in 2017, accounting for 26% of all deaths. But as (heart disease) rates continue to fall, cancer could likely become the leading cause of death worldwide, within just a few decades," said Gilles Dagenais, a professor at Quebec's Laval University in Canada who co-led the work.

"The world is witnessing a new epidemiologic transition among the different categories of non-communicable diseases, with cardiovascular disease no longer the leading cause of death in high-income countries," said Deganais.

He said his team's study showed that cancer was the second most common cause of death globally in 2017, accounting for just over a quarter (26 per cent) of all deaths.

Deganais said that as heart disease rates fell globally, cancer could become the leading cause of death worldwide "within just a few decades."

The study followed more than 160,000 adults, in high-, middle-, and low-income countries over the course of decade.

It determined that people in poorer nations were on average 2.5 times more likely to die from heart disease than those in richer ones.

It conversely found that non-infectious diseases such as cancer and pneumonia were less common in low-income states than in richer ones.

A second study, also by researchers in Canada, and looking at data from patients in the same 21 countries, found that so-called "modifiable risk factors" accounted for 70 per cent of heart disease cases globally.

These included diet, behavioural and socioeconomic factors, they said.

Metabolic risk factors − high cholesterol, obesity or diabetes − caused more than 40 per cent of all heart disease, and were by far the biggest determinant of disease in richer nations.

But there was also a strong link between heart disease in developing countries and household air pollution, poor diet and low education levels.

"A change in tack is required to alleviate the disproportionately high impact of cardiovascular disease in low- and middle-income countries," said Salim Yusuf, professor of medicine at McMaster University.

"Governments in these countries need to start investing a greater portion of their gross domestic product in preventing and managing non-communicable diseases including cardiovascular disease, rather than focusing largely on infectious diseases."

Dagenais' team said their findings suggest that the higher rates of heart-disease deaths in low-income countries may be mainly due to a lower quality of healthcare.

The research found first hospitalisation rates and heart disease medication use were both substantially lower in poorer and middle-income countries than in wealthy ones.

The research was part of the Prospective Urban and Rural Epidemiologic (PURE) study, published in The Lancet and presented at the ESC Congress in Paris.