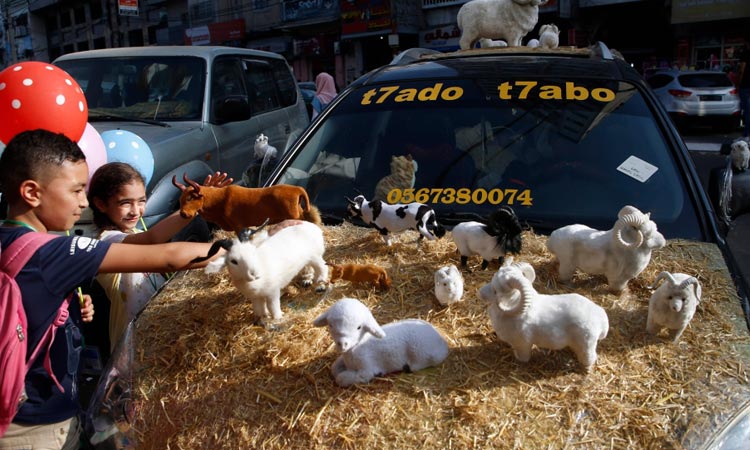 Palestinian children look at a car decorated with sheep and cows in celebration of Eid Al Adha festival in Gaza City on Thursday. AFP

Ali usually marks Eid Al Adha with his family in the Gaza Strip by sacrificing a sheep, a customary annual ritual for those who can spare the cost.

But this year the 49-year-old police officer says he cannot afford to buy an animal for the "feast of the sacrifice" holiday, which begins next week, after the Palestinian Authority halved his salary five months ago. 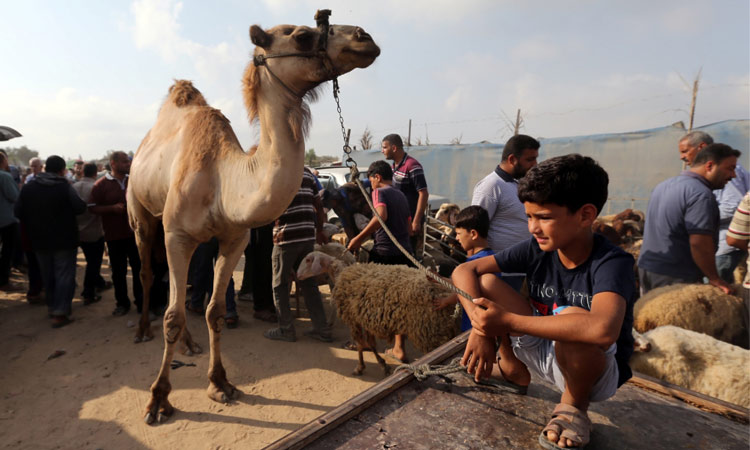 A Palestinian boy displays a camel for sale at a livestock market ahead of the Eid Al Adha in Gaza Strip. Reuters

Gaza has suffered under years of blockade by Israel and Egypt, which cite security concerns for restrictions the World Bank says have severely damaged its economy. Nearly 80 per cent of the enclave's 2 million residents rely on some form of aid and over half are unemployed.

The PA, which exercises limited self-rule in the Israeli-occupied West Bank, still has some 25,000 Gazan civil servants on payroll despite a decade-long feud with rival Hamas which has left the Islamist group in control of the coastal territory.

Many PA employees across Gaza and the West Bank had their salaries slashed in March amid a dispute with Israel over payments it makes to the families of Palestinians in Israeli jails.

Israel says the payments fan Palestinian violence, and in February it removed the portion the PA designates for prisoners' families from taxes it transfers monthly to the body under interim peace accords. 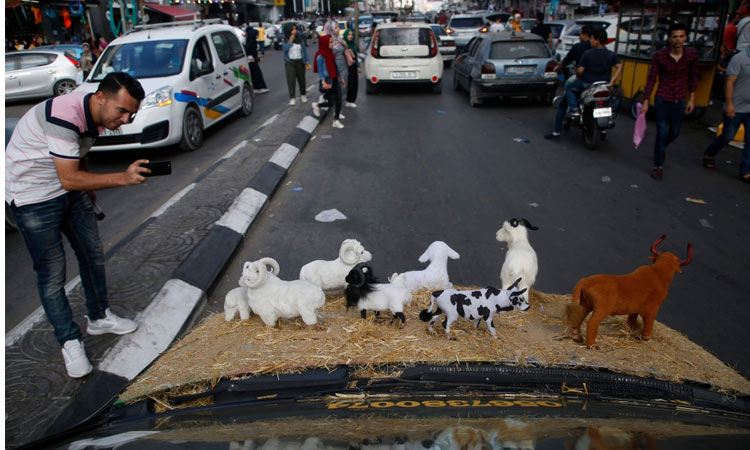 A man takes a picture of a car decorated with sheep and cows in celebration of Eid Al Adha festival in Gaza City. AFP

Palestinian President Mahmoud Abbas has refused to accept partial transfers, saying the PA is entitled to the entire sum of around 700 million ($197 million) shekels, over half its budget. The mounting fiscal pressures have squeezed the Palestinians' $13 billion economy.

The cuts have put a particular strain on Gaza, where civil servants had already been hit by earlier salary cuts Abbas imposed in 2017 to isolate Hamas.

"I used to offer a sacrifice every year but this year there is no money," said Hassan An-Najjar, an unemployed father of six. He says the cost of a sheep would run out the $500 in welfare he receives quarterly from the PA.

"I am looking for someone who can sell me a sheep and divide the cost into three or four payments," An-Najjar, 58, said.

The median monthly wage in the Strip is around $330, according to the Palestine Economic Policy Research Institute.

The territory's livestock breeders and farmers say they are desperate for customers ahead of the Islamic holiday, which commemorates God's testing of Abraham's faith by commanding him to sacrifice his son.

"This year I brought only 40 cows and so far I haven't even sold half of them," said Gaza farmer Mohammad Al Balawi. He says he normally sells 500 each year to people who may also split the animal's 9,000 ($2,600) shekel price.