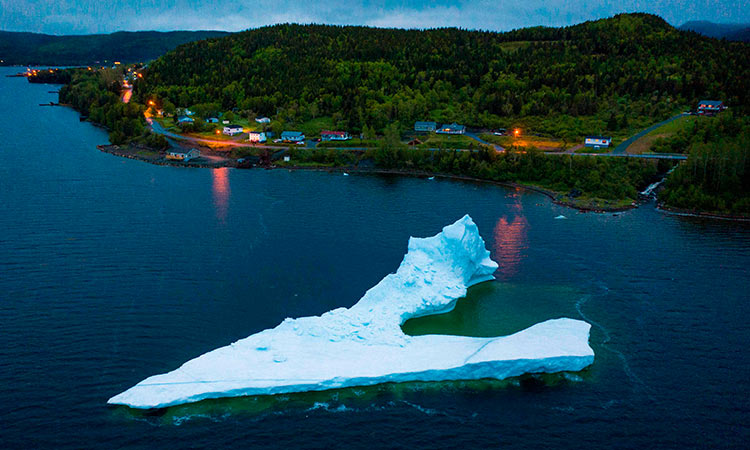 An iceberg floats near the seashore of King's Point in Newfoundland, Canada. Johannes Eisele/AFP

At dusk, tourists marvel at the sensational collapse of an iceberg at the end of its long journey from Greenland to Canada's east coast, which now has a front row seat to the melting of the Arctic's ice.

While the rest of the world nervously eyes the impact of global warming, the calving of Greenland's glaciers — the breaking off of ice chunks from its edge — has breathed new life into the remote coastal villages of Newfoundland and Labrador.

"There's not much in these small outport towns anymore to keep people around, so tourism is a big part of our economy.

Once a hub of cod fishing, the province now plays host to hordes of amateur photographers and tourists hoping to capture the epic ice melt for posterity. As winter ends, iceberg spotting begins.

"It keeps getting better every year," says Barry Strickland, a 58-year-old former fisherman who now takes tourists in his small boat around King's Point in the north of the province. 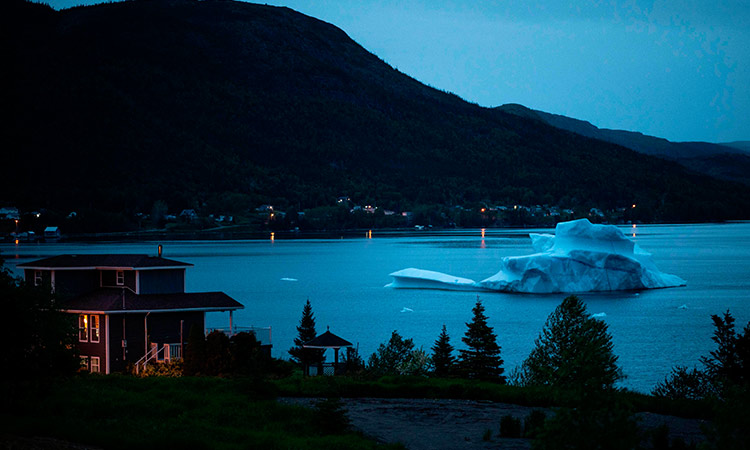 An icebergs swim at the seashore of King's Point. AFP

"We've got 135, 140 tour buses with older people coming into the town every season so it's great for the economy."

Winds and ocean currents bring the icebergs from northwest Greenland, thousands of kilometers (miles) away, to Canada's shores.

Strickland's boat excursions are often fully booked during the high season from May to July, with tourists coming from all around the world to King's Point, a village of just 600 inhabitants.

An iceberg floats near the seashore of King's Point in Newfoundland, Canada. AFP

Tourists look at an icebergs from the seashore of King's Point. AFP

"There's not much in these small outport towns anymore to keep people around, so tourism is a big part of our economy," said Devon Chaulk, who works in a souvenir shop in Elliston, a small town of 300 on "Iceberg Corridor," as the coastline is now known.

"I've lived here my entire life, and the increase in tourism around here in the past 10 to 15 years has been incredible. It's not surprising to have thousands of people here over the next couple of months," said the 28-year-old.

Last year, a total of 500,000 tourists visited Newfoundland and Labrador, a number roughly equivalent to the province's total population. 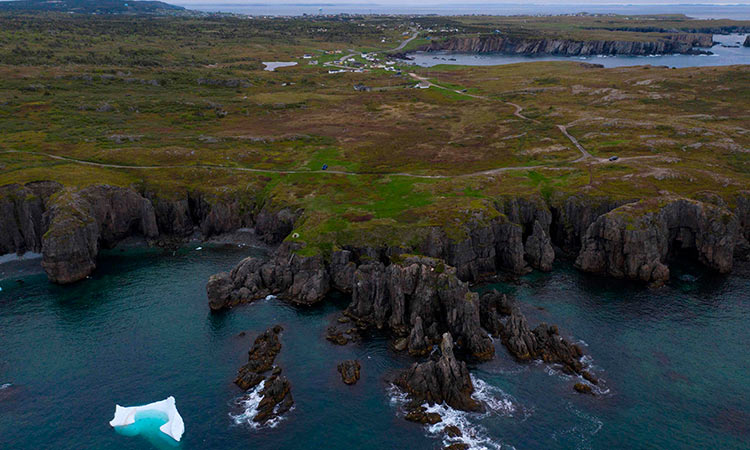 An iceberg floats near Bonavista in the early morning in Newfoundland, Canada.

The tourism boom has helped offset the decline in the region's traditional fishing industry, which is in crisis because of overfishing at the end of the last century.

Some are even marketing "iceberg water" as the purest on Earth — and selling it as a high-end luxury item. The melt is also used in cosmetics. 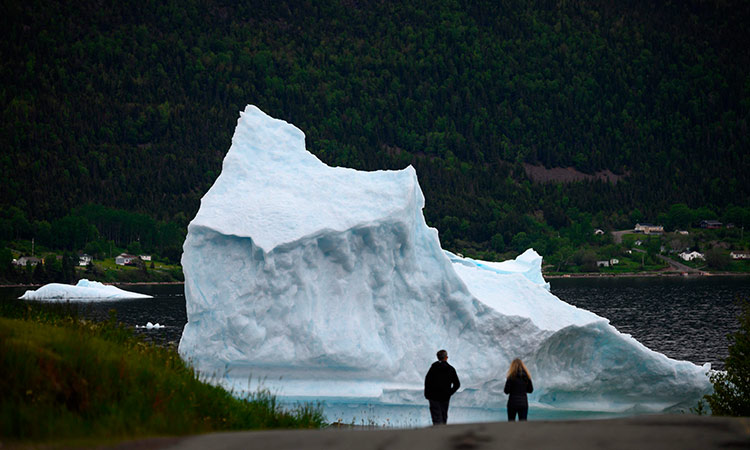 Tourists look at an icebergs at the seashore of King's Point. AFP

In recent years, the icebergs have drifted further and further south, posing a threat to shipping on this busy route between Europe and North America.

For now, tourists are enjoying the view and the experience while they can.

"The prevalence of icebergs has good things and bad things about it," says Melissa Axtman, an American traveler.

"It is a concrete image of global warming to see icebergs making it to these places where the water is warm," he told AFP.

"There's something mysterious and impressive about it, but knowing too that they are not supposed to be here makes you wonder, and it's a little scary." 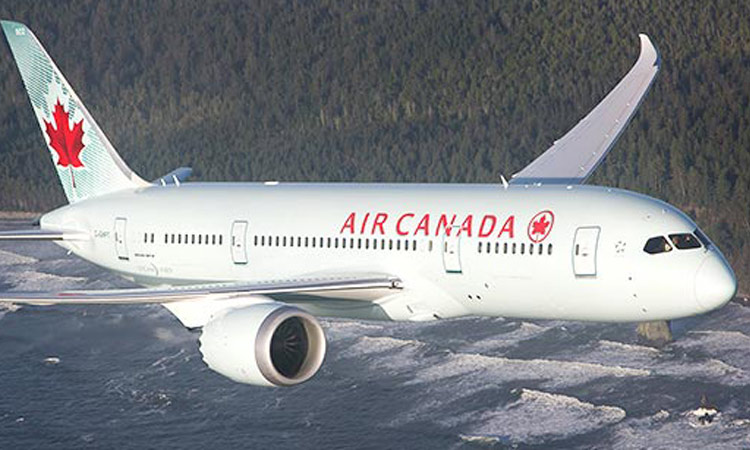 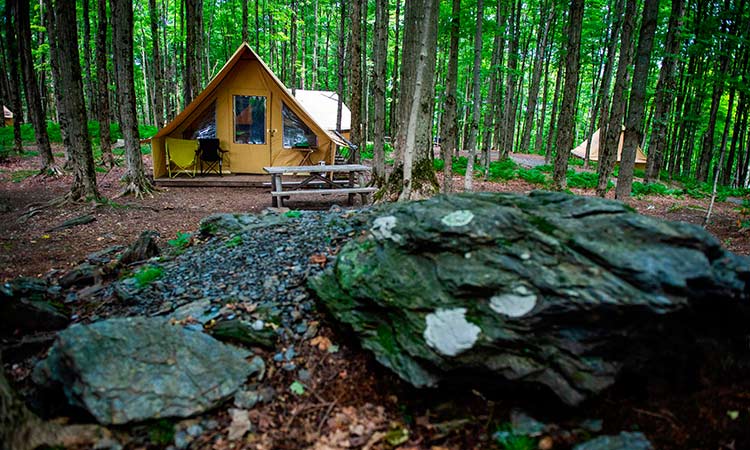 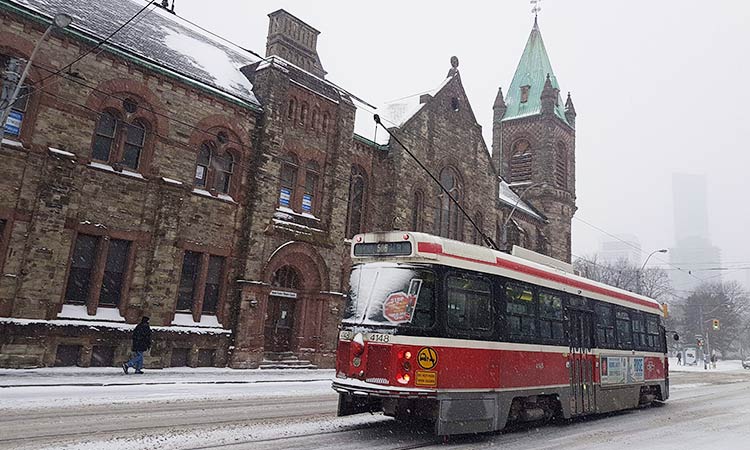 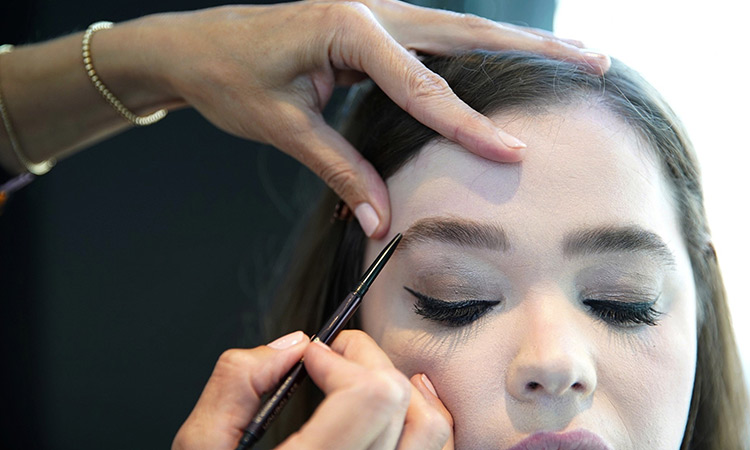 Make-up and masks: How do we manage the two together?

Face masks have become part of the new normal, but what does that mean for how we use make-up?