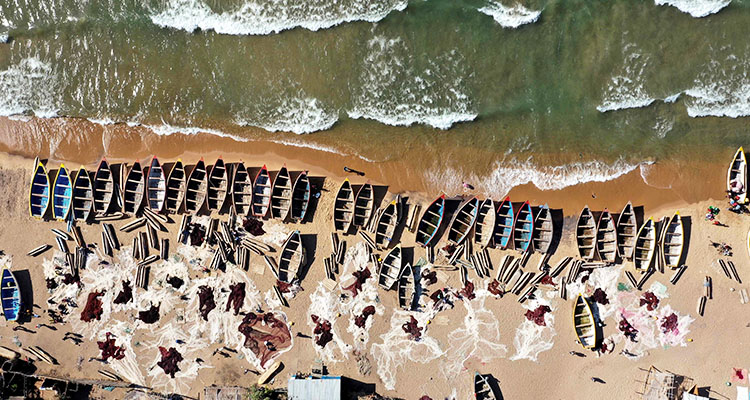 Fishing boats are seen on the shore of the Lake Malawi at the Senga village.

An eager crowd waits for a cedarwood boat near Lake Malawi.

The crew of six deliver a single net of chambo, sardine and tiny usipa fish from the boat, just one of 72 vessels that land their catch every day on the beach at Senga Bay.

But overfishing and climate change have taken their toll.

"The fish nowadays are more expensive, because they are becoming scarce. Some children have stopped going to school because their parents can't find the money.

'No alternative to fishing'

Senga community leader John White Said says increasing gale force winds and torrential rains have made it harder for fishermen on the lake.

"Our men can't catch fish because of wind which is much stronger than before," he said, adding that the rains are increasingly unpredictable on the lake.

Malawian fisherman checks on fish drying up on charcoal on the shore of the Lake Malawi.

Malawian fishermen fix their fishing nets as fishing boats are seen on the shore.

Malawian fishermen work through their catch on their return ashore.

A Malawian child walks through fishing boats on the shore.

According to USAID, the number of rainfalls incidents in the aid-dependant country is likely to decrease -- but each rainfall will be more intense, leading to droughts and floods.

On top of the environmental impact, the number of fishermen in Senga had doubled in the last 10 years due to the lack of other jobs, Said said.

"There is no alternative to fishing."

Traders take their purchases in buckets to makeshift reed tables to be dried, smoked, fried or boiled in preparation for the market.

"Declining fish catches are mainly due to unsustainable fishing practices," said Sosten Chiotha, a Malawian environmental science professor who works for the Leadership for Environment and Development (LEAD) action group.

Chiotha said climate change was hitting Malawi with "increased frequency and intensity of extreme weather events in the major ecosystems including lakes."

"I'm worried," he said. "In Malawi most people depend on fishing financially and as a cheap food source.

"The men have to cast their nets further and further away from the beach."