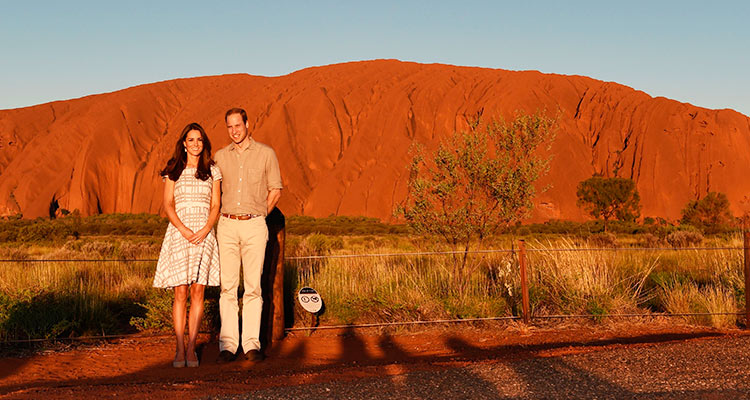 Britain's Prince William and his wife Catherine, stand in front of Uluru in the Northern Territory.

Clambering up the giant red monolith, also known as Ayers Rock, will be prohibited from October -- in line with the wishes of the traditional Aboriginal owners of the land, the Anangu.

"People don't realise when they go off the road they are actually trespassing on pastoral land, or Aboriginal land, or protected land.

But a rush to beat the ban has led to a sharp increase in tourists and is causing its own problems for the World Heritage Uluru-Kata Tjuta National Park.

Tourists climb the monolith of Uluru against the wishes of the local Anangu Aborigines.

A sign declaring the popular climb to the summit of Uluru "closed" in the World Hertage-listed Uluru-Kata Tjuta National Park in central Australia.

A complete ban on climbing the rock comes into force in October.

"We have got so much of one particular market coming, we don't have enough infrastructure to handle the number of drive travellers."

While most visitors are doing the right thing, camping venues in the area are at capacity with advance bookings, leaving many less organised arrivals to set up illegally.

"People don't realise when they go off the road they are actually trespassing on pastoral land, or Aboriginal land, or protected land," Schwer said.

"We are getting people that are leaving their rubbish behind and lighting fires," he added.

"Sadly, people are also emptying their toilet waste out of their vans on what they think is unpopulated land, but is actually private land."

In the 12 months to June 2019, more than 395,000 people visited the Uluru-Kata National Park, according to Parks Australia, about 20 percent more than the previous year.

"This is reflected in the 'please don't climb' message," they added.

Lyndee Severin from Curtin Springs station and roadhouse, one of just a few camping venues within 100 kilometres of Uluru, said "the vast majority of people are doing the right thing" but hundreds were setting up illegally by the side of the road or down a bush track.

"So we have some people that think that the rules don't apply to them," she told AFP.