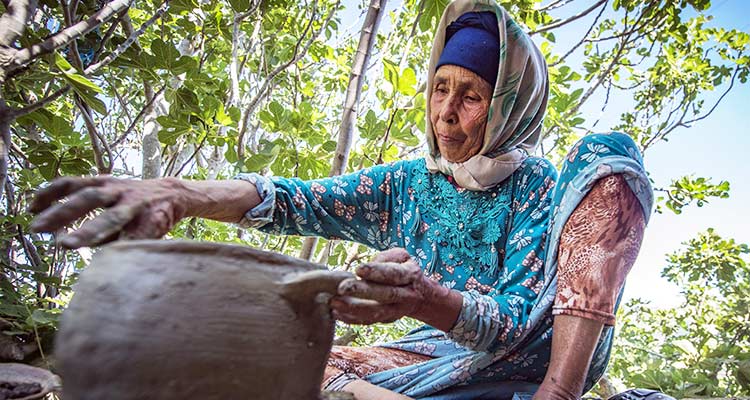 "When I heard about the workshop on Instagram, I signed up immediately because the practice is disappearing.

"Mama Aicha is old and her knowledge must be passed down," she added.

The tribe counted around 90 potters at the end of 1990s. Now, only a half-dozen remain.

"The youth here don't want to dirty their hands with clay. They dream of being officials with fixed salaries," said the grandmother, everyone affectionately calls Mama Aicha.

Like everywhere in the Rif mountains, women potters from the Sless tribe, to which Aicha Tabiz's family belongs, are vanishing.

"When I was young, everyone used clay pots and bowls for daily life and my mother sold them at market, but today everyone prefers plastic," said Mohamed Tabiz, 53, Aicha's eldest son.

Researchers, collectors, enthusiasts are among the many that have warned for decades of the disappearance of this craft once passed down from generation to generation.

"We wanted to establish a museum in the village," Tabiz said, but "the local authorities weren't interested".

The most scholarly of those calling attention to the tradition's decline, German anthropologist Rudiger Vossen, criss-crossed Morocco in the 1980s and 90s to catalogue the techniques and designs used by each tribe.

With a twinkle in her eye, Mama Aicha patiently guides her students in the studio set up next to the family farm.

Papers tacked to the wall list useful words in the local dialect - terms for pottery and tools, common phrases such as "can you help me?" and "what do you think of this?"

The master potter teaches mainly using gestures. Like the majority of women from remote parts of Morocco, she dedicated her life to her fields, her livestock and her children.