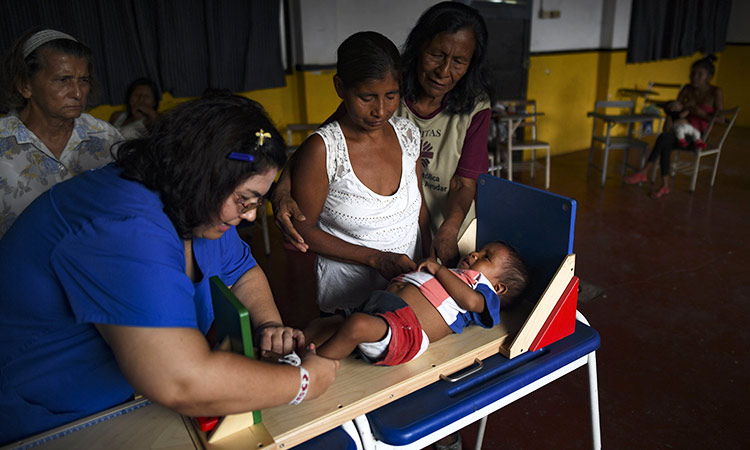 A Yukpa native toddler is checked by a doctor in Zulia state, Venezuela. Yuri Cortez/AFP

The sweltering heat of the Venezuelan forest makes no difference to Jose Gregorio, who trembles with a cold chill. "I have pain everywhere, fever," he said.

Gregorio has the classic symptoms of malaria, a disease eradicated years ago among his Yukpa indigenous people, but it's back with a vengeance all across crisis-struck Venezuela.

"He had sore joints and then started vomiting, and it's been four or five days since he's eaten anything," says his worried wife Marisol.

Their four-month-old baby babbles beside his father on the bed.

"The baby and I also had malaria," says Marisol. "Before, that was not the case here, there was only chikungunya and dengue, malaria came back here last year."

She doesn't bat an eyelid at the mention of either of the other mosquito-borne viruses, whose spread has been fueled by the collapse of Venezuela's health system. 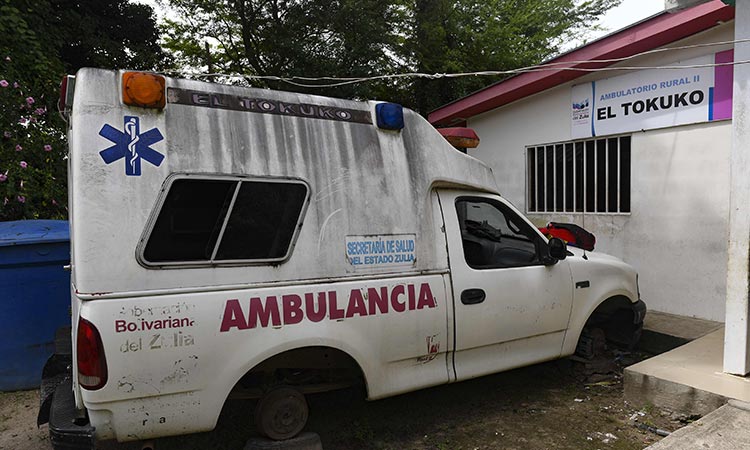 A damaged ambulance remains stranded in front of an ambulatory clinic. Yuri Cortez/AFP

With 3,700 people, El Tucuco is the Yukpas' "capital" and malaria is rapidly making its presence felt here as in the rest of Venezuela — a country that could once boast of being the first to have eradicated the disease in 1961.

There are no official statistics on malaria's reach into El Tucuco, nor on the number of deaths it causes.

But from his consulting room at the Catholic Mission, Dr Carlos Polanco is seeing a developing crisis.

"Out of 10 people who are tested for malaria in the village laboratory, four to five come out with a positive test. This is an alarming figure."

According to Sandoval and Polanco, the reason for malaria's sudden virulence in El Tucuco is simple: once-regular fumigation missions by the Venezuelan government stopped.

"And as the population of mosquitos increased, cases exploded," said Polanco. 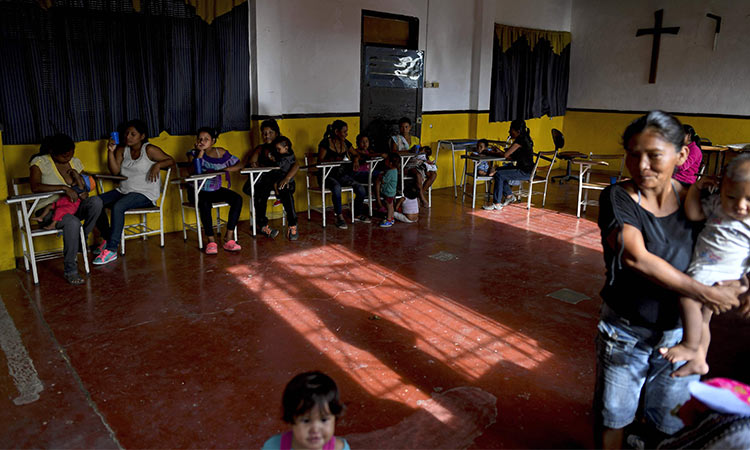 Children wait for their turn to be checked by a doctor. Yuri Cortez/AFP

The malaria explosion has gone hand in hand with the worsening economic crisis. According to Nicolas Maduro's government, inflation reached a staggering 130,000 percent in 2018 and GDP halved between 2013 and 2018.

Despite a poster of late President Hugo Chavez at the entry to the clinic, there is little sign of government presence in El Tucuco. Dr Luisana Hernandez despairs of ever seeing any state help.

"Every day, everything is deteriorating a bit more," she says, exasperated. Refrigerators intended to keep vaccines cold do not work "because we have no gasoline to run the generator," and both the clinic's broken-down ambulances are gathering rust in the garden.

"We've knocked on every door. But nobody answers us," said Hernandez.