Explore the islands of Seychelles this summer holiday - GulfToday 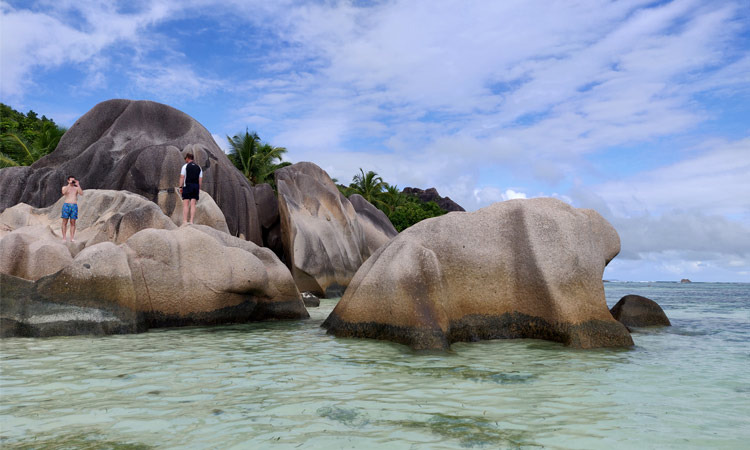 Anse Source D'Argent in La Digue Island is considered to be one of the best beaches in the world.

“Welcome to Seychelles. Its 7.30am local time and a pleasant 28 degrees outside, with warm, sunny weather. Have a pleasant stay,” announced the captain of our Abu Dhabi to Mahé, Air Seychelles flight.

One look outside with turquoise waters skimming one side of the airport prescient and rolling lush hills hugging the other side, and I knew this was going to be a vacation to remember.

The prospect of ideal tropical climes had me stoked from the word go. Nature has been abundantly generous with this archipelago of 115 islands scattered in the Indian Ocean off Africa’s east coast.

Dotted with picture-postcard worthy beaches and lofty verdant mountains, it is little wonder that the former British colony that was predated by French control, enjoys a reputation as one of the best beach destinations in the world.

While there are plenty of islands you can choose to stay at in Seychelles, the bustling resort bay of Beau Vallon in Mahé (the largest island in Seychelles) is a good base. 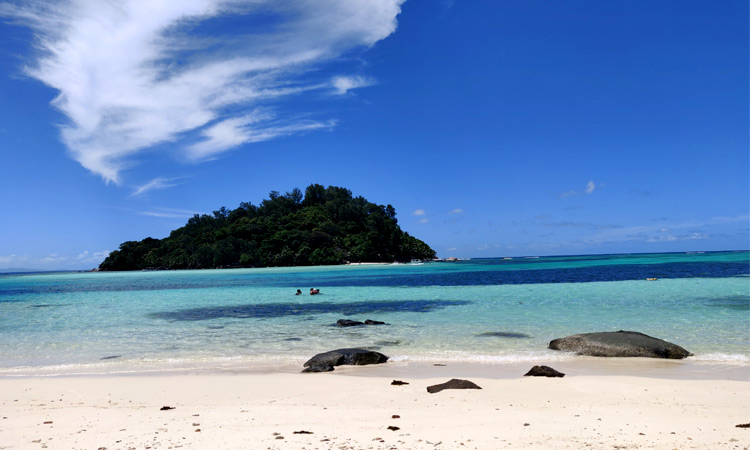 A beach on Round Island in Ste. Anne Marine National Park.

There are tonnes of hotels and guest houses you can choose from, most of them fringing the bay’s endless stretch of coast — the longest in Mahé.

It is in close proximity to capital Victoria, which means sightseeing, shopping and nightlife pursuits (Trader Vic’s at the H Resort in Beau Vallon is a crowd-puller or you can dine in at a string of live-band equipped local restaurants with tropical feels) can be easily taken care of.

A good way to explore Seychelles is island hopping by boat, and you will find a plethora of tour packages and water sport activities for the many different islands that make up the country.

If you like us jet off to Seychelles for a short summer break and want to explore it to the hilt, read on to find out which are the must-see attractions.

The Ste. Anne Marine National Park tour consisting of the islands of Ste. Anne, Long, Round, Moyenne, Cerf and Ile Cachee is a good way to begin your island excursion from Mahé.

The boat tour which begins at 10am, departs from a marina on Eden Island — a leisure destination à la Palm Jumeirah — heading for the sparkling seascapes off the north-eastern coast of the island.

To start with, we were given a quick guide to the marine park islands and its rich flora and fauna — our spirited guide Rocco informed us that Round Island formerly housed a prison and I thought to myself, ‘What a picturesque location to be imprisoned in?’

This was followed by sighting vibrant corals dancing in the depths of the ocean from the boat’s glass-bottomed floor.

The park contains one of the largest areas of seagrass meadows and it soon became evident as we observed the seabed below, juxtaposed with colours of the many marine creatures. 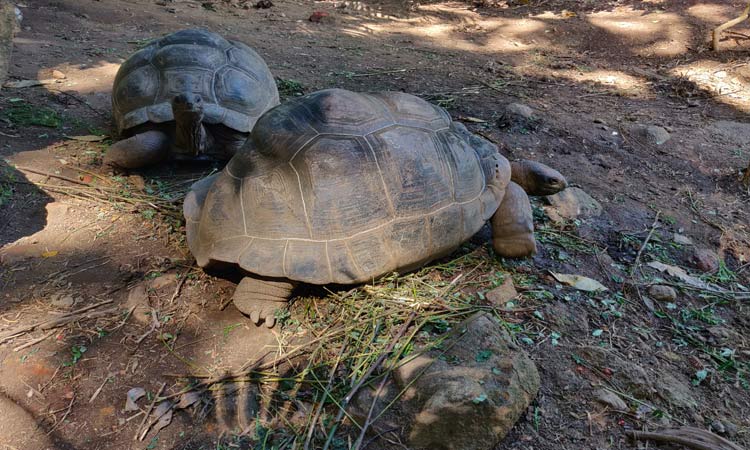 The country is home to giant Aldabra tortoises, which are unique to the region.

Rocco then proceeded by pulling out a packet of bread, which was a cue to the ‘fish-feeding’ part of the tour.

No sooner did we break bread and toss it into the water, appeared a mighty school of zebra and silver fish, all voraciously hungry and probably well-versed with the tour drill.

Next up was a stopover at a cove on Round Island. After a quick paddle and a series of photo-ops, we made our way to Long Island by foot. Yes you read right!

Our guide notified us that when the tide recedes, it’s possible to walk across a sandbar from one island to the other.

Indulging in this walkathon surrounded by knee-deep cerulean waters, with thick white clouds for cover and looming dense hills, made us feel like contestants on an adventure reality show.

After a teaser of the rich coral beds and diversity of marine life, the most-awaited part of the tour came forth — snorkelling.

Diving into the warm waters off Cerf Island revealed an array of fearless angelfish, parrotfish and sweetlips fish.

All the swimming is bound to make you hungry and the trip was rounded off with a scrumptious creole buffet at the pristine Moyenne Island.

Prepared by locals, the spread consisting of freshly grilled meats, fish, rice dishes, veggies, fruits and sweet treats, was served in a makeshift shed by the waters.

We couldn't have asked for a better setting to kickback after all the activity.

After lunch and a quick pause, we flocked to the rocky mountain outcrop on the island to watch giant endemic Aldabra tortoises in all their natural glory as they chowed on the forage from the island.

Anse Lazio beach in the island of Praslin.

Del Place restaurant in Port Glaud has a picturesque view.

One can enjoy snorkelling off Cerf Island in Ste. Anne Marine National Park.

The iconic Clocktower in the capital Victoria.

A bird’s eye view of the capital Victoria from Morne Seychellois National Park.

The gazebo at Mission Lodge where Queen Elizabeth II once sat.

The islands of Praslin and La Digue that we settled on for day two of our itinerary, are touted to be some of the most beautiful in Seychelles.

Lesser peopled in comparison to Mahé, they are apt for tourists looking for solitude.

A heavy spell of rain welcomed us as we alighted from our catamaran at Praslin after an hour’s journey from Eden Island.

After quickly taking shelter under the scruffy jetty building, came our pick up van which whisked up and down the winding hills of the island to reach Vallee de Mai Nature Reserve, a UNESCO heritage site which is home to the world’s largest and most peculiar nut — the coco de mer.

Found only in the islands of Praslin and Curieuse in Seychelles, the coco de mer is rare and included in the list of protected species.

This was followed by a stopover for a leisurely two hours at Anse Lazio beach, which often makes it to the list of ‘Top 10 Beaches in the World’ and rightly so.

Studded with swaying palms and giant granite boulders, the experience of swimming in its emerald waters as fish trot past your feet is therapeutic.

Next stop on our itinerary was a restaurant on the island of La Digue where waiting for us was a scrumptious creole lunch consisting of a melange of grills, colourful vegetables and zesty curries. 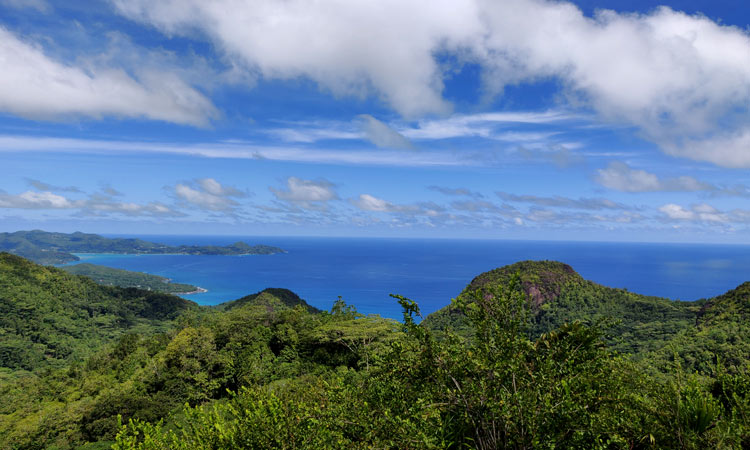 The panoramic Mission Lodge in Mahé is one of the most popular vantage points in all of Seychelles.

Post our meal, we hopped onto bicycles that came included in our tour package and pedalled our way across the idyllic island, observing local life.

An important sight here is the L'Union Estate which is home to giant Aldabra tortoises and trees that reach for the skies.

We checked out the park’s local vanilla and coconut (copra) plantations before making a dash for another ‘Best Beach in the World’ candidate — Anse Source D'Argent.

Lying at the end of the reserve, sun-dappled granite boulders and coconut palms welcomed us as we approached its ribbons of white sands.

The beach has shallow waters making it perfect for a swim, and those who are intrepid can even snorkel or kayak in its vast emerald reef. A perfect way to end a beautiful day.

For our third and last day in Seychelles, we chose to meander around the city.

A good place to start your exploration of any town is its centre and this stands true for Mahé too.

Its home to the country’s tiny capital Victoria, where you feel the pulse of the city, buzzing with local activity and tourist spots.

The main centre here houses the famous Victoria Clocktower, a replica of the one outside Victoria station in London.

In the vicinity of the tower can be found many important buildings and institutions including the National Museum.

Another important centre and beehive of activity is the vibrant Sir Selwyn Clarke Market where we found a gargantuan variety of tropical fruits, vegetables, fish and spices.

There’s even a Hindu temple, mosque and a number of churches in a close radius if you wish to explore Seychelles’ spiritual leanings.

After scouring the rather small limits of the capital we headed up the Morne Seychellois National Park in the private car we hired to check out one of the most popular vantage points in all of Seychelles — the panoramic Mission Lodge, which was once the site of an ancient boarding school built for slave children. 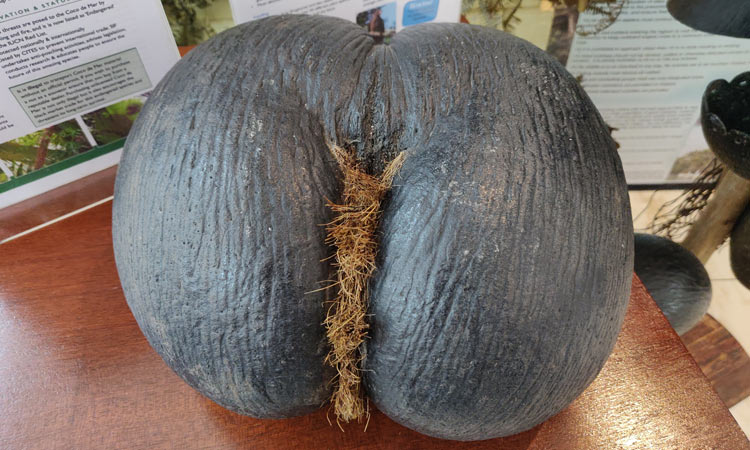 The world’s largest nut coco de mer can be found naturally only in the islands of Praslin and Curieuse in the Seychelles.

Such are the vistas the point commands that it has even merited a visit by Queen Elizabeth II, who sat on a shaded gazebo, (it’s still intact) sipping tea, bewitched by the sweeping views of the mountain slopes and azure waters lapping them up.

We followed Mission Lodge’s rather meditative experience by another invigorating tour of the plantations at the nearby SeyTé Tea Factory.

You can find local tea varieties such as Cinnamon, Island, Vanilla and Citronelle here.

All the huffing and puffing worked up a mighty appetite and brought us to the foothills of the national park at Del Place restaurant in Port Glaud, west of Mahé.

Famished from the day’s events, we quickly took our seats on the restaurants sun deck overlooking a postcard-perfect bay sprinkled with a dozen or so buoying fishing boats.

Without much ado we placed our orders, which read like a quintessential creole lunch, a cuisine we had come to love.

And so with that sumptuous meal and three days of island-hopping came to an end our Seychelles sojourn.

Saying goodbye to this land of breath-taking beaches, vibrant creole culture and beautiful people was indeed hard, but as we sipped the last of our drinks, we found ourselves collectively saying, ‘We shall be back.’