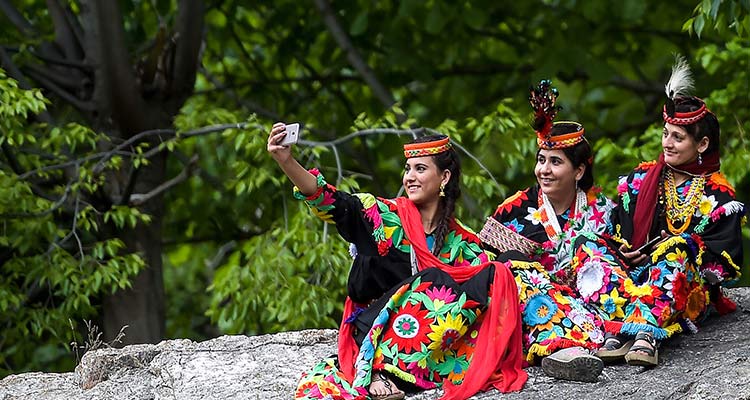 A Kalash woman takes a selfie with her friends. Aamir Qureshi/AFP

In a remote valley in Pakistan dozens of Kalash minority women dance to celebrate spring's arrival — but as a gaggle of men scramble to catch them on camera, the community warns an influx of domestic tourists is threatening their unique traditions. 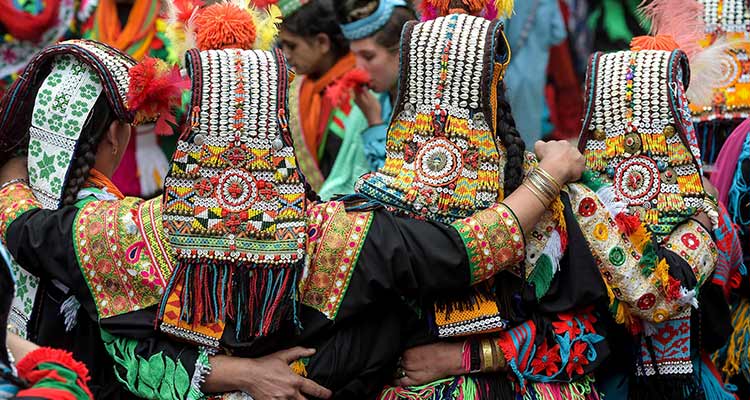 Kalash women dance at Bumburate village in the mountainous valleys in northern Pakistan.

As celebrations kick off, tourists with phones jostle to get close to Kalash women, whose vibrant clothing and headdresses contrast starkly with the more modest attire worn by many in the conservative Islamic republic.

"Some people are using their cameras as if they were in a zoo," said local tourist guide Iqbal Shah.

Known for their pale skin and light-coloured eyes, the Kalash have long claimed ancestral links to Alexander the Great's army — who conquered the region in the fourth century BC.

Kalash women wearing traditional dresses dance as they celebrate 'Joshi', a festival to welcome the arrival of spring. Aamir Qureshi/AFP

A Kalash woman smiles as she celebrates 'Joshi.' Aamir Qureshi/AFP

The Kalash have long claimed ancestral links to Alexander the Great's army — who conquered the region in the fourth century BC. Aamir Qureshi/AFP

Every year the Kalash, greet the new season with animal sacrifices, baptisms, and weddings at a festival known as "Joshi." Aamir Qureshi/AFP

In Bumburate, posters now call on visitors to seek permission from villagers before photographing. Aamir Qureshi/AFP

A general view shows the traditional houses of Kalash people at Rumbor village in the mountainous valleys in Northern Pakistan. Aamir Qureshi/AFP

They worship many gods and marriages of choice are the norm — unlike in the rest of Pakistan where unions are often arranged.

However, the community is far from a liberal beacon. Members of the community often wed in their teens, with women poorly educated and expected to perform traditional roles in the home.

Stories about the Kalash are nonetheless frequently fabricated, and this has been amplified in recent years by the proliferation of smartphones and social media.

Another calls them "beautiful infidels", saying "anyone can go and marry any girl there."

"How could that be true?" asks Luke Rehmat, a Kalash journalist.

"People are systematically trying to defame the community. They are fabricating stories... when a tourist comes with such a mindset, he will try to experience [it]." 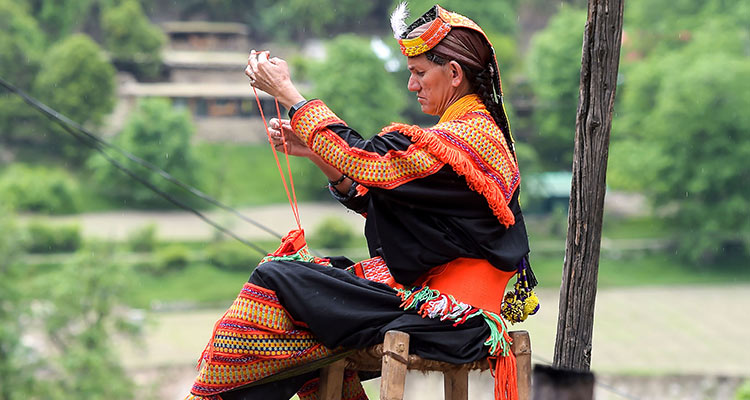 A Kalash woman knits clothes outside her house. Aamir Qureshi/AFP

According to tourists who spoke to AFP — most of whom were men travelling in groups — their primary interest in exploring the Kalash Valley was to learn about a new culture.

"We want to be part of this festival but it doesn't mean that we want to mix up with girls," says tourist Sikander Nawaz Khan Niazi from Lahore.

But friction has been increasing in recent years.

In Bumburate, posters now call on visitors to seek permission from villagers before photographing and signs warn tourists not to harass women.

"If they don't respect us, we don't need tourists," says Yasir Kalash, the vice president of the local hotel association.

"If they respect... our culture and traditions, we must welcome [them]."

Regulating tourism is a cumbersome but vital task for the Kalash, with money from the industry increasingly providing an important source of revenue for the community. 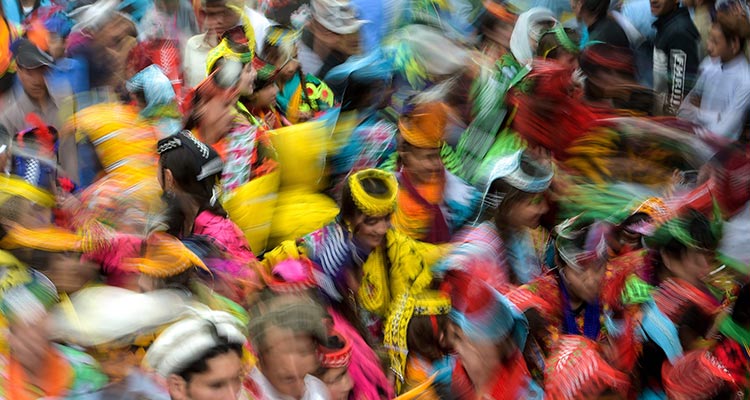 We are going to die

The Kalash — who once inhabited a vast territory stretching from the Himalayas in Kashmir to northern Afghanistan — are now one of the smallest religious minorities in Pakistan, according to Akram Hussain, the director of a local museum.

A recent survey put their number at just 3,872, living in three remote valleys.

"We are going to die if we are not supported," says Hussain.

Kalash traditions, Hussain argues, can be expensive. Weddings and funerals require families to kill dozens of animals for the festivities, driving them into debt, forcing them to sell off land and leave their ancestral homes.

Others have begun wearing veils to hide their faces from the prying eyes of outsiders.

The ongoing erosion of the culture at the hands of outside forces is tragic, says Sayed Gul, an archaeologist from Bumburate.

"They don't want to participate just because of these cameras and this insensitivity," says Gul.

"If these things are continuously happening ... maybe in a few years, there are only tourists, there are no more Kalashis to participate and dance in the festivals."