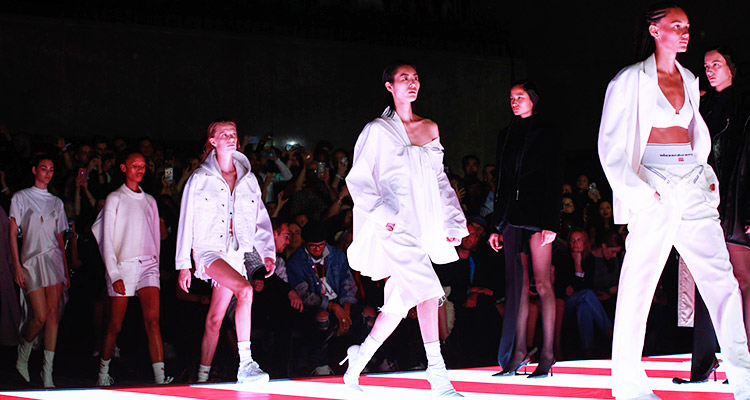 Models display creations of Alexander Wang at the Rockefeller Center.

Embracing Manhattan's iconic Rockefeller Center as his venue, Alexander Wang offered a huge hug to his city and American fashion as he showed his latest collection al fresco Friday night - complete with street food and a public crowd joining the usual insiders.

This ready-to-wear Collection 1 is the start of his second year off the traditional fashion week calendar, choosing June and December over February and September in a plan to offer more options to consumers throughout each year.

There seemed to be something freeing about that for the designer, who joyously waved to the crowd at the close of his show in pink print cutoffs and a white sweatshirt, bringing family up on his ever-changing lit stage as the sun went down.

This ready-to-wear Collection 1 is the start of his second year off the traditional fashion week calendar.

A guest awaits the start of the Alexander Wang fashion show at the Rockefeller Center.

A model displays a creation at the show.

A model gets her make-up fixed backstage.

Models are being dressed backstage to walk the ramp.

Coming just a few days after Memorial Day, Wang was in an all-American red, white and blue mood, flashing a U.S. flag branded with an "a'' for, yes, Alexander, as the real thing lined the center's lower plaza on poles. It's where Rockefeller Center's popular skating rink draws masses of tourists.

Above, Wang branded his food-cart hot dogs, slushies and pretzels for his guests with the same "a." His flag made it onto some sweaters and wide elastic undershort waistbands as well.

"We're so honored to be here at Rockefeller Center," Wang said live on Instagram, YouTube and his website during a pre-show hosted by the young, goofy YouTuber Jay Versace, a fashion show newbie. "I love New York. It is my home. I feel so proud to be based here. It's such an incredible city."

A magnet for supermodels on his runways and celebrity followers, Wang didn't disappoint. Diplo was front row and Kaia Gerber and Kendall Jenner were among his walkers. Versace strolled backstage, chatting up Gerber as he watched the models getting their hair and makeup done.

Restricting the public to a street-level view of the show, looking down, Wang set up his benches for insiders around the golden masterwork Prometheus, a statue in a fountain done by Paul Manship in 1933. The evening's weather was perfect, closing the city's first sunny, mild day after days of rain. There were smiles all around in the crowd as they were treated to the fresh air.

On the runway, Wang paid homage to American fashion and some of its greats - Donna Karan, Ralph Lauren and Calvin Klein among them - as Anna Wintour explained to Versace. She, too, was pleased the city's torrential rains had stopped and not spoiled the experience. 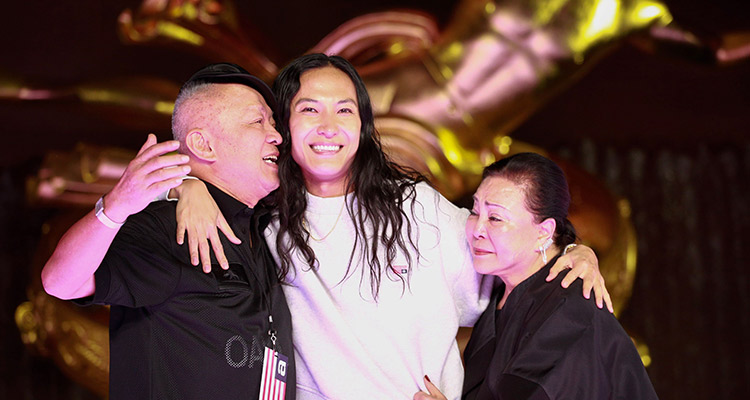 Fashion Designer Alexander Wang and his family react after a Show at the Rockefeller Center.

Wang opened the mixed-gender show with a series of button-down coats and jackets for fall. All had one lapel emblazoned with his name. One model walked in a Statue of Liberty crown and others in tiny black silver studded skirts. Wang topped some heads with billed caps that had head wraps on the outside.

Denim jackets were paired with asymmetrical skirts, open to the hip on one side and hanging just above the angle on the other. Pete Davison of "Saturday Night Live" modeled pants with half black, half white legs, paired with a sleeveless T-shirt on top (showing off his tattoos) and a cap with the bill turned backward. His model strut needs work.

Fur trimmed a light blue striped shirt-cuffed coat, while chunky soled sneakers were mixed with stilettoes on the feet of his walkers. Fringy western looks came in black with multiple braided belts. There were bright whites in relaxed trousers and jackets, shorts and culottes, some fit for evening versus day streetwear.

Wispy slip dresses were worn over white T-shirts and loose burnished corduroy pants were cinched at the ankle with elastic. An identical pair of the trousers was done in eggplant purple.