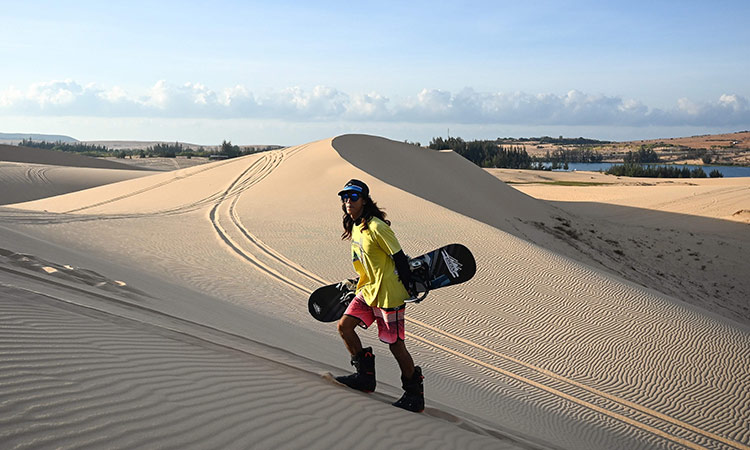 Sun-kissed and shaggy-haired, Nguyen Thai Binh swaps his flip flops for bulky boots ahead of snowboarding practice on the sand dunes of southern Vietnam — the unlikely training ground for the country's fledgling winter athletes with mountain-sized ambitions.

Binh is one of Vietnam's top snowboarders, pioneering a push to boost winter sports in Southeast Asia where snowfall is virtually unheard of.

"This sport is so new for Vietnamese, and we don't have any snow to practise on," said 29-year-old Binh, looking California cool in a Quicksilver cap and bright boardshorts.

"Snowboarding is struggling to develop here because there's no snow, and Vietnam doesn't have much money to send athletes abroad to train.

Though Vietnam's northern Sapa Mountains see the occasional dusting in winter months, there are no snow slopes for aspiring skiers and snowboarders in the tropical country.

Binh made his international debut at the Asian Winter Games in Sapporo, Japan in 2017, joining Vietnam's first-ever team to compete in the tournament long-dominated by Japan, South Korea and China.

Nguyen Thai Binh riding down sand dunes on his snowboard in the southern Vietnamese town of Mui Ne. Manan Vatsyayana/AFP

Binh preparing to ride down a sand dune. Manan Vatsyayana/AFP

Binh made his international debut at the Asian Winter Games in Sapporo, Japan in 2017. Manan Vatsyayana/AFP

Vietnam walked away with no medals, but plenty of pride. Manan Vatsyayana/AFP

It was a lifelong dream for Binh who fell in love with sports as a scrawny kid, so skinny that he was taunted by classmates for looking like a drug addict.

Committed to bulking up, he tried his hand at martial arts, then kitesurfing and longboarding before he started sandsurfing in 2007.

"I was hesitant, I'd been practising on the sand dunes for a while so I had the technique, but the snow was so slippery," Binh said.

It was an eventful week for the seven athletes who competed for Vietnam.

Many didn't have proper winter gear and froze if they stayed outside for too long. Skier Pham Tien Dat tumbled during slalom training, broke his shoulder and couldn't compete. The Vietnamese journalists covering the games got sick and were hospitalised.

"Binh was a fast learner because of his longboarding and surfing skills," said Le Quan, the Vietnam team coach. 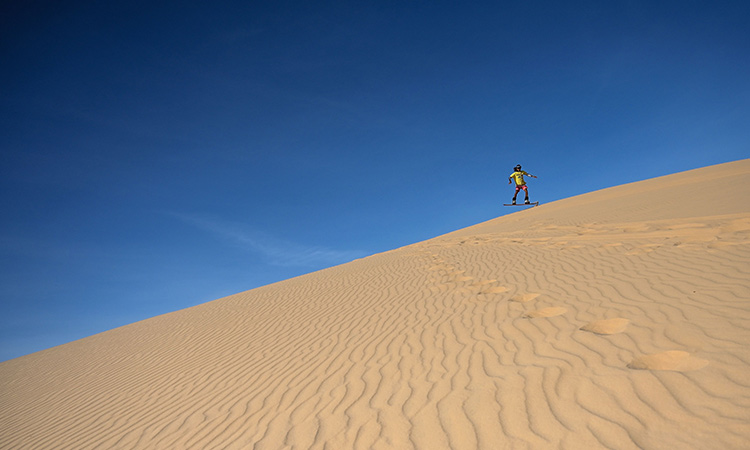 Binh is hoping to compete at the next Asian Winter Games in 2021 — if he can find a sponsor. Manan Vatsyayana/AFP

Vietnam walked away with no medals, but plenty of pride.

"We went to Sapporo not aiming for a high ranking but to challenge ourselves," Quan told AFP.

There were eight Southeast Asian teams at the 2017 games, the highest number since 1986 when the Philippines became the first country from the region to compete.

Perhaps the most famous tropical team is Jamaica's bobsled troupe whose story is chronicled in the popular 90s comedy "Cool Runnings."

The main hurdle for winter sports in warm weather countries is money.

"Snowboarding is struggling to develop here because there's no snow, and Vietnam doesn't have much money to send athletes abroad to train," he said.

Binh is hoping to compete at the next Asian Winter Games in 2021 — if he can find a sponsor.

Skateboarding made its debut at the competition last year and will premier at the Olympics in Japan in 2020.

But Binh says snowboarding is still his first passion, and he's proud to have helped it grow in Vietnam.

"Before we competed (in Sapporo) no one knew about winter sports, no one could have even imagined we could have a team."