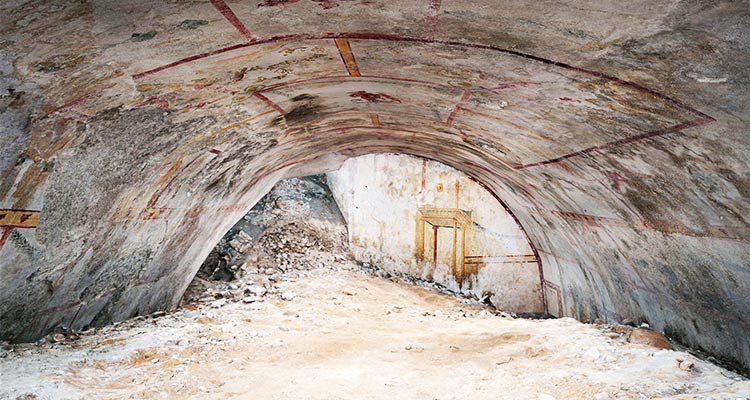 The newly discovered room of the Nero Domus Aurea, is seen in Rome.

The team came across an opening leading to a room covered with depictions of mythical creatures including centaurs and the god Pan, officials from the Colosseum archeological park, supervising the work, told AFP on Friday.

The archaeologists have dubbed the chamber, which will require excavation with much of it buried and just its vault currently visible, Sala della Sfinge, or the Room of the Sphinx and say it is a significant discovery.

The find offers a tantalising glimpse into "the atmosphere of the 60s of the first Century AD in Rome," the Colosseum officials said, adding that what could be seen of the vault was "very visible and fairly well preserved." 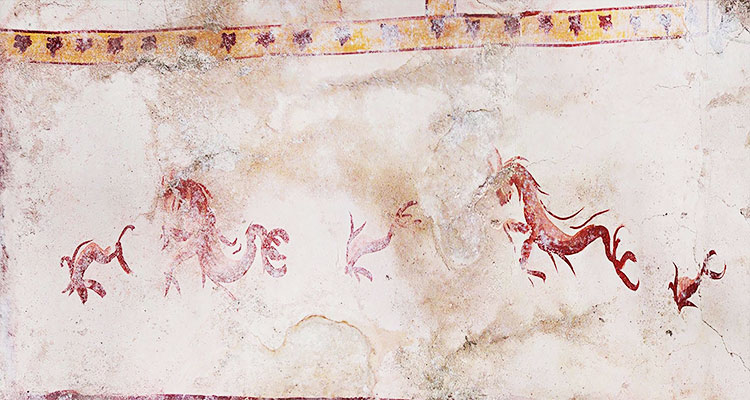 A beautifully decorated room has been discovered at Emperor Nero's famed Domus Aurea in Rome.

Set against a white background can be seen "red-edged squares finessed with yellow-ochre lines and golden bands punctuated by a dense series of floral elements," the officials said.

Each of the tiles depicts different types of animal form -- from panthers to birds, centaurs and a sphinx, while others show musical instruments.

The archaeologists were working on a nearby area of the complex set beneath a hill next to the Colosseum in ancient Rome's historic centre when they chanced upon the chamber.

Architects and archaeologists secured the site once home to a gigantic landscaped palace and consolidated the frescoes with a view to embarking upon a further stage of excavation to reveal the room in its full splendour. 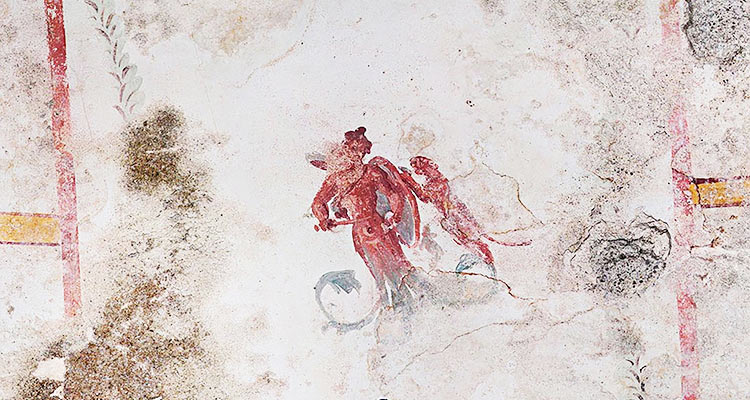 Domus Aurea (Golden House) in Rome was brought back to light after 2,000 years.

Built between AD 64 and 68, the immense complex, which other Roman emperors later built on, comprises buildings, gardens and an artificial lake.

After Nero, who legend has it played the fiddle during the AD 64 fire which laid waste much of the centre of the Roman Empire, died in AD 68, his successors tried to destroy races of his rule. Emperor Trajan had the Domus Aurea covered over with soil and built baths over it while Vespasian set in train construction of the Colosseum where the ornamental lake had been.

In the intervening centuries, much of the site was abandoned and today only few traces remain visible of what was a huge estate and of which only a fraction has been excavated with much of it lying under today's modern bustling city.

Part of the site was discovered by Renaissance artists including Raphael, some of whom managed to slide down on ropes and squeeze themselves through a hole in the ceiling to gaze upon magnificent frescoes which would inspire their own works.