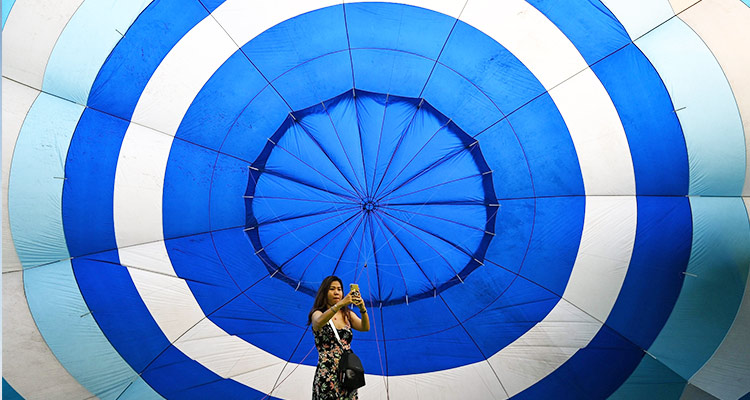 Several balloons -- including one shaped as an octopus, another as a heart -- offered aerial views of the former capital's sprawling stone citadel, which was once the seat of Vietnam's emperors.

It is not a journey for the faint of heart.

"When the balloon started to go up, I was buzzing and I could see the full view of Hue.

Hue is one of Vietnam's most popular tourist destinations, attracting some 4.3 million visitors last year.

Most visitors travel by foot or cycle rickshaw to see the city's ancient pagodas, imperial tombs and citadel, which still bears damage from intense fighting during the Vietnam War.

Women walk over a bridge as a hot air balloon flies over the former capital's stone citadel.

Volunteers pull a balloon as it is inflated.

Visitors ride on a tethered balloon during a hot air balloon festival in the central Vietnamese city of Hue.

Balloon enthusiasts are hoping to change that.

"I really hope hot air ballooning will be more popular and closer to Vietnamese people," said Vo Ngoc Ha, one of the organisers of the third annual festival.

At $280 for a 40-minute jaunt into the skies, hot air balloon rides remain out of reach for most.

Some visitors at Sunday's festival opted instead for a tethered ride for about $6, while others enjoyed the event from the ground, snapping selfies as the balloons soared over the city.

Dutch pilot Wout Bakker, who has come to the festival every year since it was first held in 2017, said he has seen a gradual uptick in interest in hot air ballooning which he hopes will grow further.

"Vietnam has good potential because more and more tourists are coming and also local people -- they have money to take flights, so it is building up," he said.