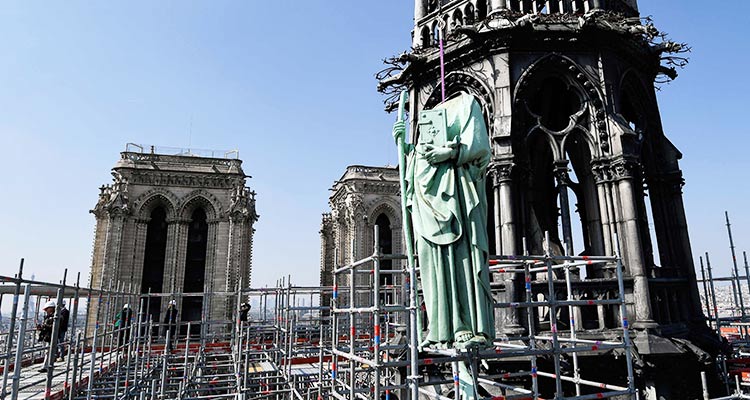 One of 16 copper statues is lifted off the Notre-Dame-de-Paris Cathedral to be taken for restoration.

Sixteen bronze statues briefly took to the skies over Paris after they were removed from the Notre-Dame cathedral to undergo restoration work.

Tourists at the world-famous landmark were left stunned on Thursday as the statues -- representing the 12 apostles and the four evangelists from the New Testament -- were lifted off the spire of the cathedral by crane.

"What's unique is that it's the first time we've seen them up close since they were set up by Viollet-le-Duc in the 1860s," Marie-Helene Didier, who is in charge of the renovation work, told AFP.

"It's an exceptional event because we've brought the 16 statues down in a single day. It's a magical moment for everyone," she said. 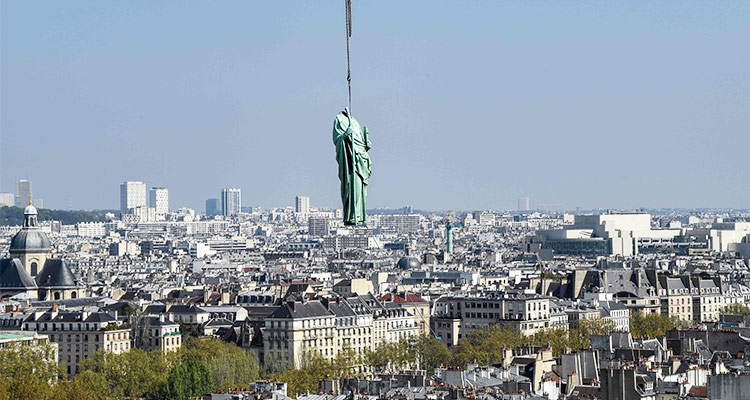 The sixteen statues,12 apostles and 4 evangelists, which sit around the spire of the cathedral are being removed to be sent to Perigueux.

Built between the years 1163 and 1345, Notre-Dame is one of the most popular tourist sites in Paris, drawing around 13 million people every year.

Its spire, like the rest of the gothic edifice, is undergoing a 11-million-euro ($12.4-million) overhaul financed by the French state to repair damage inflicted by time, pollution and the weather.

"Extraordinary," said Sofiane, an onlooker from London, as the statues flew through piercing blue skies suspended from a giant 100-metre (300-foot) crane. "I'll never see anything like it again."

The statues will be put on display inside the cathedral and will travel two-by-two to a specialised restorer in the Dordogne area of southwest France.

Once all have been renovated, they will be put back to their position staring out over the City of Light in 2022.