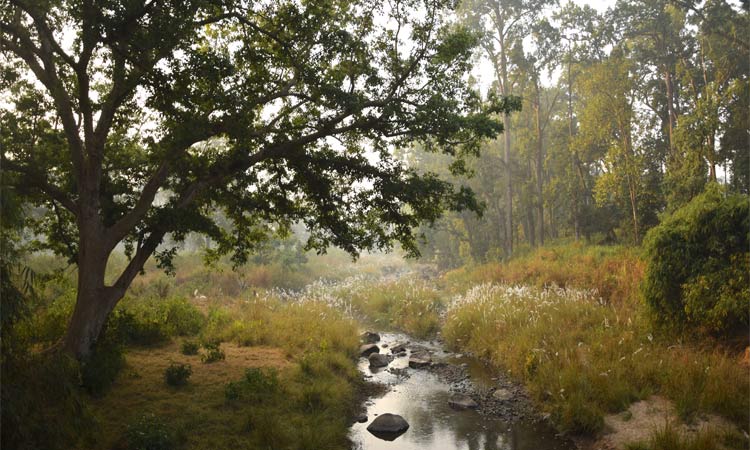 Kanha National Park was one of the first wildlife reserves set up in the 1970s under the conservation programme Project Tiger. Mark Johanson/TNS

I’m swaddled in a mess of blankets to fight the pre-dawn chill as I bump down the dusty dirt roads of India’s Kanha National Park in an open-air safari jeep.

My guide, Prabhat Verma of PureQuest Adventures, is brimming with optimism. But it’s my third trip past the park’s green gates, and I’ve yet to lock eyes with the creature I flew halfway around the world to meet.

You can go to Africa for cheetahs or lions, but for Bengal tigers, your best bet is the wildlife reserves at the heart of the Indian subcontinent in the so-called “Tiger State” of Madhya Pradesh. Somewhere up ahead are nearly 100 of these regal cats, who prowl 932 square kilometres of pristine Indian wilderness. Even so, there are no guarantees I’ll see one.

Straddling the Maikal Hills of the Satpura Range, Kanha is a vast landscape of sal tree forests and wide-open savannahs that’s a four-hour drive from the nearest airport in the diminutive regional capital of Raipur.

On morning and afternoon safaris the day before, we followed fresh tiger tracks in the park’s talc-soft dirt to dead ends. The spotter in my safari jeep flicked his binoculars left and right, though his ears were doing the real work. He heeded the warning calls of langur monkeys (who scan the perimeter from treetops) and spotted deer (who smell tigers from a mile away) — all to no avail.

We’ve seen some discrete peacocks ambling through the woods, a pair of jackals racing down a meadow and a rare barasingha swamp deer hiding in the brush. We’ve photographed a menagerie of colourful kingfishers and watched termites build sandcastle-like mounds out of the burnt-orange earth. I know deep down this ought to make me happy, that all animals should carry equal clout. But the tiger is such a rare beast; it would be cruel not to get at least one glance at its striped orange robe.

According to the World Wildlife Fund, only about 3,890 tigers are left in the wild. India is home to 70 per cent of them, and its role in ensuring the big cat’s survival can’t be understated. Tiger numbers in India are believed to have dropped from about 40,000 at the beginning of the 19th century to just 1,800 in the early 1970s, when India launched the conservation programme Project Tiger.

Kanha was one of the original nine reserves set up under that programme (there are now 50), and I’ve come here to witness a rare good news story in global conservation. Preliminary results of India’s latest tiger census suggest that the nation’s tiger population will rise from 2,226 in 2014 to more than 3,000 in 2019.

According to the World Wildlife Fund, only about 3,890 tigers are left in the wild and India is home to 70 per cent of them. Mark Johanson/TNS

A tigress walks along a ridgeline in Kanha National Park. Mark Johanson/TNS

Gray langurs have a symbiotic relationship with deer in the parks of Madhya Pradesh, warning each other of approaching tigers. Mark Johanson/TNS

Spotted deer are top tiger prey and some of the most common animals in Madhya Pradesh. Mark Johanson/TNS

A pair of noisy jungle babblers sit in a tree in Bandhavgarh National Park. Mark Johanson/TNS

A fresh round of deer calls sends us racing to a forested ridge like the paparazzi we are with cameras at the ready. I take a big gulp of the crisp morning air, which has the tang of a fresh cut lemon, and wait in silence for something — anything — to happen.

A few restless minutes go by. Just as I’m starting to feel deflated, the tigress appears atop the ridge, flaunting a kind of self-assurance that only apex predators possess. Her muscles tighten with each step as she surveys the land, her coat shining under the low spotlight of the morning sun. She is, by all accounts, Indian royalty.

In the excitement of the moment I’ve somehow missed the larger tiger — her mate — hiding in the brush. She walks over to him, brandishes her 2-inch canines and lies down for the briefest of moments before they retreat into the darkness of the forest. The whole scene lasts all of five minutes, but it’s so cinematic, it feels as if I’ve watched an entire nature special in the flesh.

Back at the Kanha Earth Lodge, a well-camouflaged safari camp in the park’s buffer zone, we toast to a successful day with a potent beverage made by the local Baiga tribe from the flowers of the sacred mahua tree. It tastes sour, but our spirits our high. We’ve prowled the lands that inspired Rudyard Kipling’s “The Jungle Book,” and we’ve faced our very own Shere Khan.

We feel privileged, even if we know we’re hardly alone. Madhya Pradesh historically has had far fewer tourists than the more popular Indian states of Rajasthan or Kerala, but visitor numbers doubled in 2017 following the live-action remake of “The Jungle Book.” With Netflix picking up the storyline in its 2018 feature “Mowgli,” the buzz around India’s languid heartland continues unabated.

Electric with the thrill of a first tiger sighting, we set off on a four-hour drive to Bandhavgarh National Park, another tiger-rich reserve with forested hills. Bandhavgarh was, until 1968, the hunting grounds of a former Indian prince, who plucked the last white tiger from the wild here in the 1950s. While these genetic aberrations may be gone, their standard orange-and-black brethren are thriving. I keep my binoculars peeled for sightings of them — as well as leopards, sloth bears and the rest of the “Jungle Book” crew. I’m treated instead to birds, monkeys and deer.

Back at my hotel, the suitably named King’s Lodge, members of the local Gond tribe dance by an evening bonfire. They gyrate to songs about nature, animals and working the land — all to a mildly hypnotic beat.

On my final afternoon safari through Bandhavgarh, the sunset is a glorious affair of golden light and crisp air. I feel lucky to have spent a few days far from the crowds in this nation of 1.3 billion. I’m even content that I may not find another tiger — that is, until the tiger finds me.