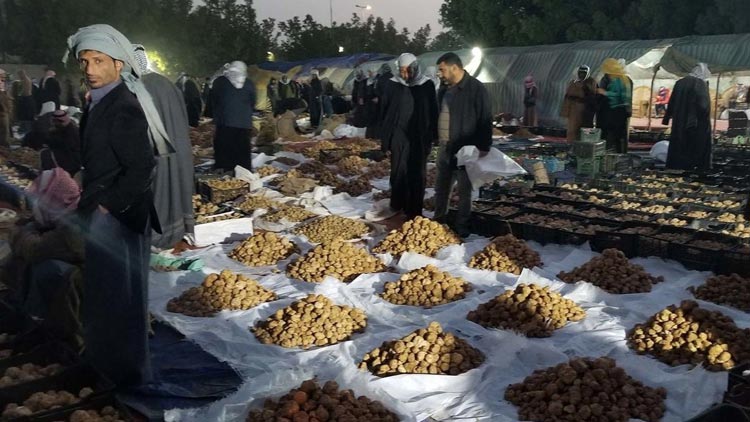 In Nuqrat AlIn Nuqrat Al Salman, a southern Iraqi town that was the site of Saddam Hussein's most remote prison, truffle merchants ply their trade in dedicated markets.

To reach Ekeyran, a place so desolate no one has bothered to put it on a map, you must abandon the bustle of Baghdad for a 200km jaunt to the city of Samawah, dodge camel caravans while driving over to Al Salman district – onetime home to Saddam Hussein's harshest prison – then find a Bedouin guide to drive you two more hours deep into the uncharted desert plains near the Iraqi-Saudi border.

There, buffeted by roaring winds amid near-freezing temperatures, you too can slowly wander the barren landscape, knife in hand as you scour the ground for hours in search of the almost cruelly obscure signs hinting at your quarry.

What is it you seek? The inauspicious-looking bonne bouche known as the desert truffle.

Delicate, subtle, light yet satisfying, the desert truffle has much of the magic of its more prestigious (and rarer) European counterpart.

And for those who prize the desert truffle – and many do, sometimes at the risk of their lives – finding it means nothing less than a quest for treasure, one that mixes equal parts timing, superstition and danger.

First the timing. To get truffles, you need water, a fair amount of it too. But it all depends on when the first rain begins to fall.

Storms in October, November, even as late as December can herald a good harvest. Anything after, says Nofal Saleh, a mustachioed 35-year-old Bedouin, is just too late.

Saleh, who has long roamed Iraq's south for kama, as truffle is known in Syria and Iraq, is perched one winter day in the passenger seat of a van, scanning the horizon. He's swathed in a fur-lined abaya, a long cloak, and black-and-white kaffiyeh headdress to protect him from the elements. He points to what appears to be a random spot on the road, a signal to veer off into the desert.

The storms are also where superstition comes in. Thunder and lightning are said to boost the alchemy of the truffle that grows in different types all across the arid and semiarid areas around the Middle East and zones around the Mediterranean.

Timing is also essential for the harvest. The season is fleeting, lasting a mere three months in the arid lands of Iraq and Syria.

Saleh continues scanning the seemingly unchanging landscape, then suddenly announces it is time to stop. He takes a moment to adjust his robes, wrapping them around himself in preparation for the elements. He opens the door, and the pressurised quiet of the cabin gives way to a growling wind.

How do you know your quarry lurks under the surface, without the benefit of truffle-sniffing dogs or pigs, which are considered unclean by Islam? With great difficulty, at least for the untrained eye.

That is one explanation as to why, after walking the uninterrupted plains, squinting at the ground, you may find yourself sans truffle.

None of this slows Asaad Jabaali, who is leaning against the wind, his robes flapping. The 23-year-old pounces on one promising spot, then another.

Once all the clues converge, he squats over the prospective site, brandishing a long kitchen knife to cut a quick circle around the spot. He works the surface with both hands to reveal the rotund outlines of the truffle. He gently works the knife at an angle underneath the truffle, and pops it out.

But harvesting can also be where the danger comes in, for the finest truffles are found where foragers face extreme threats. One such danger zone is the Iraqi-Saudi border, where in December, Saleh says, overzealous Iraqi guards shot what they thought was a smuggler but was actually a truffle forager.

To the southeast you might encounter land mines, vestiges from the war with Iran. In the western Iraqi province of Anbar, home to the reddish, smaller iteration of desert truffle known as hargi, truffle hunters had to contend with the threat from Islamic State.

But for many, the danger is worth it, especially if market forces are on their side.

Depending on the area, a good forager can get anywhere from 2-4 kg in a day, according to Jabaali.