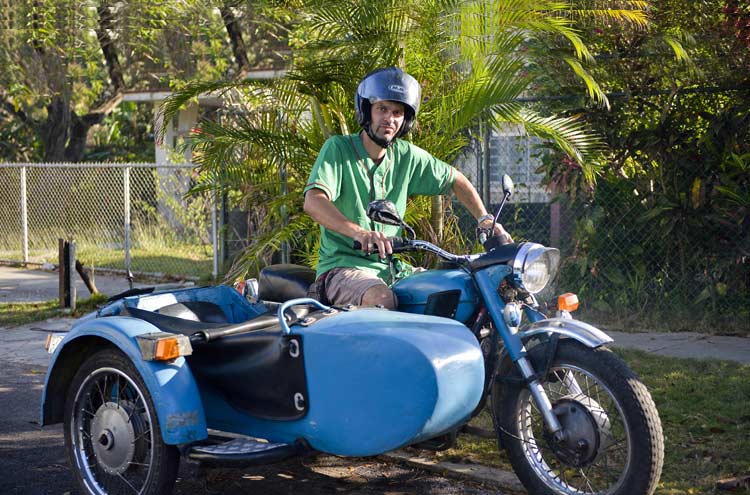 HAVANA: Cuba's love affair with 1950s-era American cars is still intact, but the communist-run island also has a lingering attachment to a stalwart of Soviet-era leftovers, the motorcycle sidecar.

Ranging from rusting relics to the pampered and the pristine, hundreds of old motorcycle sidecars rattle through the streets of Havana.

The retro appeal gets a lot of attention from tourists "but here it's common, normal," says Enrique Oropesa Valdez.

Valdez should know. The 59-year old makes a living as an instructor teaching people how to handle the sidecar in Havana's traffic, where riders seem able to squeeze the machines through the narrowest of gaps.

And they've built up an intense loyalty among the mend-and-make do Cubans. 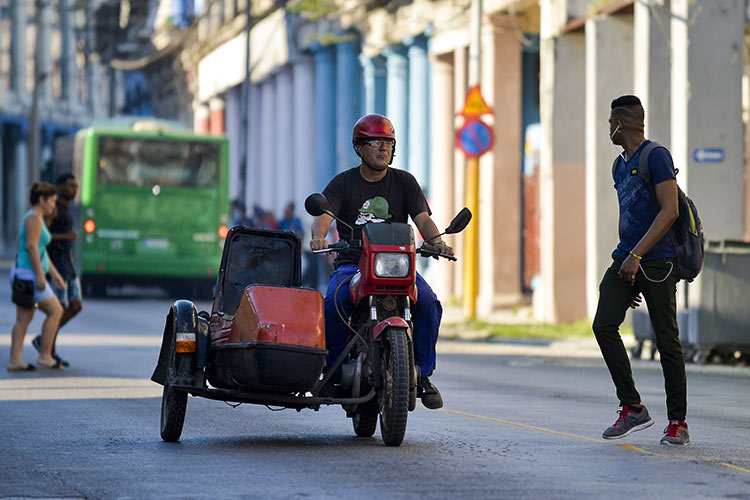 A local rides a motorcycle with sidecar along a street of Havana. Photographer: Yamil Lage/AFP

"They're very practical," according to Alejandro Prohenza Hernandez, a restaurateur who says his pampered red 30-year-old Jawa 350 is like a second child.

Cheaper and more practical than the gas-guzzling, shark-finned US behemoths, the bikes are used for anything from the family runabout to trucking goods and workers' materials.

"A lot of foreigners really like to take photos of it," says Hernandez. "I don't know, I think they see it as something from another time."

Cuba lags several decades behind the rest of the world due to a crippling US embargo, so the makers' badges on the ubiquitous sidecars speak of a bygone world.

Havana's military acquired them from big brother Moscow at the height of the Cold War in the 1960s and 70s, for use by state factories and farms. Over the years, they gradually filtered down to the general public.

"When the Cuban government bought sidecars from the Russians in 1981, it was for state-owned companies," he said.

Later, the companies "sold them on to the most deserving employees," he said. His father, who worked for a state body, passed the bike on to him.

"Even if the sidecar gets old. I'll never sell it because it's what I use to move around. It's my means of transport in Cuba, and there aren't many other options," said Nunez.

Valdez himself has a cherished green 1977 Ural. 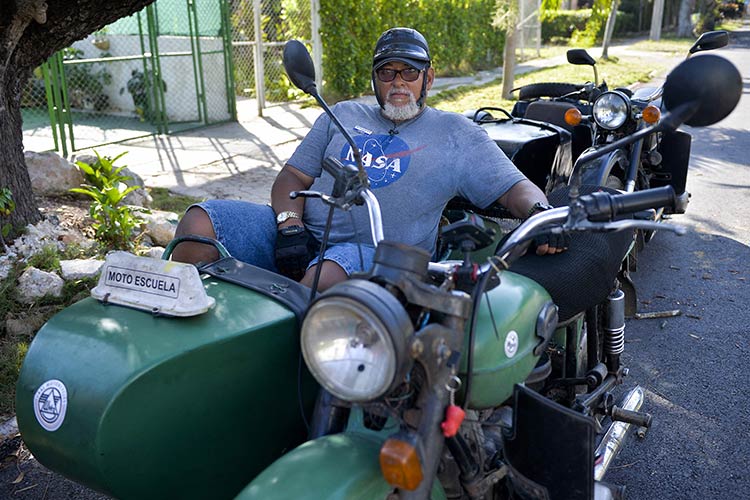 Enrique Oropesa, a motorcycle riding instructor, poses in the sidecar of an old motorcycle in Havana. Photographer: Yamil Lage/AFP

And it costs less than a car, still out of reach of many Cubans.

Settled on the island with his Cuban wife, 38-year-old Frenchman Philippe Ruiz didn't realize at first how ubiquitous the motorcycle sidecar was.

"When I began to be interested, I suddenly realized that I was seeing 50 to 100 a day!"

Renovating a house at the time, he saw that many sidecars were being used to transport building equipment.

"It's a year older than me and in worse shape," he said. "Soon he had to strip the bike down and "start repairing everything."

With few spare parts available in Cuba, "people have to bring them in from abroad," which slows down repairs.

But he has no regrets. An experienced motorcyclist, he's discovered a whole new side to his passion by riding the Russian machine.

"It's very funny, it's a big change from the bike because we cannot turn the same way, we can't lean, so you have to relearn everything but it's nice."

"It's especially nice with the family because you can put a child in the sidecar, my wife behind, and suitcases," he said.

In future he hopes to take advantage of the interest in the old bikes to rent it out.

"I think it will be a bit of a change from all the convertibles here."