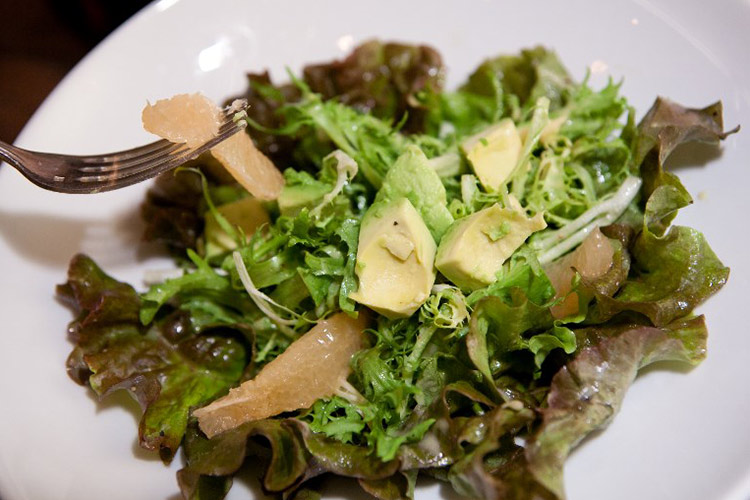 A salad of grapefruit and avocado with pickled ginger is at display in Washington. AFP

Although the total number of people who suffer with cardiovascular disease is increasing, the number of those who die from heart and circulatory diseases is in steady decline. This is because treatment options, quality of care and access to healthcare have improved considerably since the middle of the previous century.

Even though this is definitely a positive sign, it means that more and more people are living with cardiovascular disease – which can seriously impact quality of life and puts people at risk of sudden death.

In the UK alone, healthcare costs relating to heart and circulatory diseases are estimated at £9bn each year – while overall, the cost to the EU economy is close to £200bn a year. It makes sense then that cardiovascular disease prevention is considered to be the number one target for many national healthcare services around the globe.

Prevention includes encouraging people to eat a healthier diet, become more physically active and stop smoking. All three can provide multiple benefits – reducing risk for a range of diseases and conditions and improving quality of life.

Diets for a healthy heart

For many people facing a diagnosis of cardiovascular disease, diet is probably one of the first things they might look to tackle. There are a number of healthy diets around – many of them associated with regions or countries, such as the New Nordic – which promotes eating root vegetables, cabbage, apples, berries, fish and game among other things – the Japanese – which advocates the consumption of rice, cooked and pickled vegetables, fish, meat and soy beans – and the Mediterranean diet.

The Mediterranean diet is a balanced diet, promoting the consumption of vegetables and fruits in addition to oily fish, olive oil, red wine, lean meats, nuts, and low-fat dairy products. It has been known since the late 1950s that it does offer cardioprotective benefits and several large and not so large studies have confirmed these findings since.

Then there is the vegan diet – a plant-based, meat-free diet, which does require abstaining from eggs, dairy and honey too. In regards to cardiovascular disease protection, the available evidence is limited. However, what we know suggests that long-term vegans have lower total cholesterol than non-vegans.

Our team recently explored the benefits of several regional and novel diets – including the New Nordic diet, the Mediterranean diet, the vegan diet and nitrate-rich ones – which are said to directly improve heart health. We looked into their cardiovascular effects both in the short and longer term.

In a recent study, we compared the short-term effects of the Mediterranean and the vegan diet. Our findings suggest that, at least in the short term, the Mediterranean diet improves the availability of nitric oxide in our veins and arteries significantly – which is important to maintain the good health of our vascular system. Nitric oxide is severely affected by the ageing process and is strongly related to the development of cardiometabolic diseases. So, the observed greater nitric oxide availability is very positive news.

Our study also found that the vegan diet offers benefits in the reduction of cholesterol levels. On the other hand, we did find that participants who followed the vegan diet appeared to also have a reduction in a number of important micronutrients – such as B12 vitamin and iodine. This is despite us providing B12 supplements to participants.

This is a serious finding: micronutrients are vitamins and minerals that our body needs in small quantities to function properly, while both iodine and B12 deficiency pose an important health risk.

Research has showed repeatedly that balanced diets are often more beneficial in the longer term – and our work strongly points to the same direction. In any case, it is probably best to avoid adopting diets that follow popular trends – and make a choice based on your individual needs.

It is also important to be well informed before making any dietary changes. This is because in some cases, a change in diet does lead to deficits of micronutrients and vitamins. This can create a health risk which surpasses the benefits.

So as far as reducing cardiovascular disease risk, our work suggests that it is probably better to look for a solution in the Mediterranean diet.

This means eating more plant-based foods – such as fruits and vegetables, whole grains, legumes and nuts. You should also look to replace butter with healthy fats such as olive oil, as well as using herbs and spices instead of salt to flavour foods. Red meat should be limited to a few times a month, but you can eat fish and poultry at least twice a week. Enjoying meals with family and friends is also a big part of the Mediterranean diet and culture – as is drinking red wine in moderation (though this part optional).