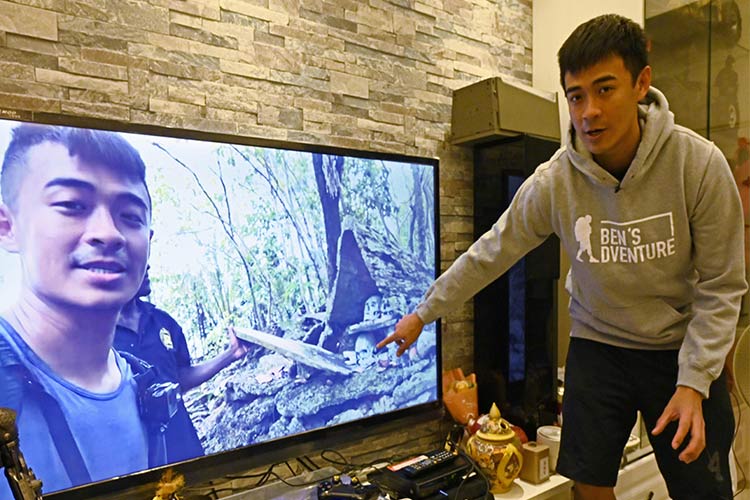 Taiwanese YouTuber Ben Wu talking about his travels while displaying a video during an interview in Taipei. Photographer: Sam Yeh/AFP

From battling a storm in the Solomon Islands to consulting a witch doctor in eSwatini, Ben Wu has trekked some of the world's less-trodden paths as he embarks on a quest to visit all of Taiwan's dwindling diplomatic allies.

The list of countries he must visit is short - just 17 nations still recognise Taiwan over mainland China, a vivid illustration of the democratic island's international isolation as Beijing uses its clout to woo Taipei's few remaining friends.

In all practical ways Taiwan is a de facto independent country but both Taipei and Beijing insist they are the one true China and that other nations can recognise only one of them. Most have sided with China as its political and economic might has grown.

Last summer Wu, 25, was having a meeting in Taiwan's foreign ministry on the day El Salvador just happened to become the latest country to switch its recognition to Beijing.

He watched as the country's flag was removed from the ministry's entrance.

"I think most young people only know about our allies when there is a termination of diplomatic relations and this is not good," Wu told at his home in Taipei. "They should know about the allies in other ways."

He came up with the idea to visit the remaining allies while riding the Trans-Siberian Railway. Flicking through a news article about Taiwan's allies he realised he only recognised three - Haiti, Tuvalu and the Vatican.

"I love travel and some of Taiwan's diplomatic allies are less known and more difficult to reach. I hope to explore these countries that fewer people have travelled to and be a part of 'people diplomacy'," he said.

So far Wu has ticked off five allies in the Pacific - Tuvalu, Nauru, Kiribati, the Marshall Islands and the Solomon Islands - as well the only ally in Africa, eSwatini.

This month, he sets out for Latin America and the Caribbean to visit Guatemala, Honduras, Nicaragua, Paraguay, Haiti, Belize, Saint Lucia, St Vincent and the Grenadines as well as St Kitts and Nevis. He will wrap up his quest with the Vatican and Palau in the summer.

"I love travel and some of Taiwan's diplomatic allies are less known and more difficult to reach. I hope to explore these countries that fewer people have travelled to and be a part of 'people diplomacy

Taiwan's diplomatic isolation was not always the case.

After its split from the mainland in 1949 when the communists defeated Chiang Kai-shek's nationalists, it was the Republic of China that was recognised by the majority, not the People's Republic of China.

The global reversal began in earnest in 1971 when Taiwan - then in the grip of Chiang's military dictatorship - was kicked out of the international club by the UN General Assembly, which recognised the PRC as "the only legitimate representative of China."

Allies began falling like dominoes with Washington switching recognition in 1979 - although it remains a key military backer and supplies Taiwan with most of its weaponry.

Those nations that remained tended to be impoverished, smaller countries in the Pacific, Africa and Latin America who have since become easy pickings as China morphed from dysfunction and poverty into the world's second largest economy.

After the 2016 election of Taiwanese President Tsai Ing-wen - who hails from an independence leaning party - Beijing has launched a campaign to further undermine the island's sovereignty.

Five allies have been poached, it blocked Taipei from attending major global gatherings and pressured a string of international companies, including airlines and hotels, to list Taiwan as part of China.

SPEAK UP FOR TAIWAN

J Michael Cole, a Taipei-based expert at the University of Nottingham's Taiwan Studies Programme, said the remaining allies most at risk of switching are those in the Pacific.

"Beijing is hard at work trying to sway those," he said, adding China may try to lure further defections as Tsai seeks re-election in 2020. 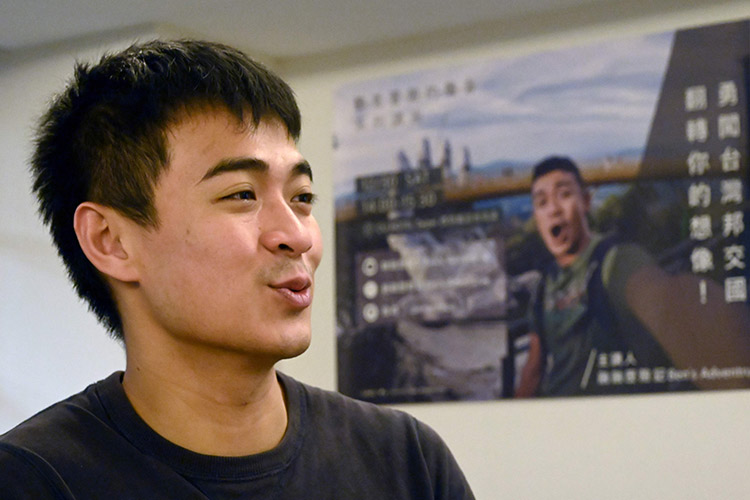 Ben Wu speaking in front of a poster of himself. Photographer: Sam Yeh/ AFP

But he added that Taiwan under Tsai had made "substantial progress strengthening ties with unofficial allies that, in the end, are far more influential, both in terms of their diplomatic weight and size of their economies, than the small states with which it has official diplomatic relations."

Wu said he wanted greater awareness of the those who have stayed loyal to Taiwan, even if somewhere like Tuvalu only boasts some 12,000 people.

"These countries have a voice in international organisations. They can speak up for Taiwan and let more people know about Taiwan's difficult diplomatic situation," he said.

Wu's YouTube videos on his channel "Ben's Adventures" have racked up tens of thousands of views and turned into a career.

One shows him bashed by a storm in a rickety boat after seeing human skulls left by head-hunters in the Solomon Islands.

Others show him consulting a witch doctor in a dark room filled with bags of herbs in eSwatini, eating betel nuts in Kiribati and finding Taiwanese food in a Marshall Islands supermarket.

I hope to introduce the culture, tradition, custom and sightseeing of our allies in a relaxing way so people can get to know these countries. I am opening a window, a door and people can explore the rest."