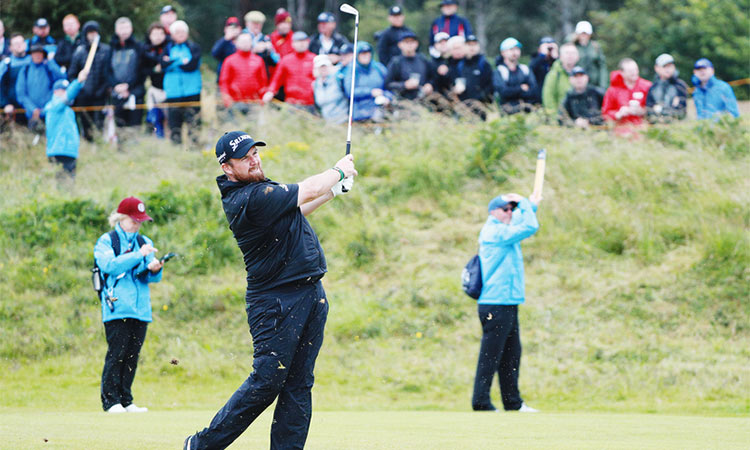 Ireland’s Shane Lowry plays a shot on the 8th hole during the final round of the British Open golf Championships at Royal Portrush golf club in Northern Ireland on Sunday.

Shane Lowry returned to the top of the European Tour’s Race to Dubai after sealing a maiden major title with a stunning six-stroke triumph over Tommy Fleetwood at The 148th Open Championship at Royal Portrush, County Antrim, Northern Ireland.

The Irishman, who won a first Rolex Series title earlier this season at the Abu Dhabi HSBC Championship Presented by EGA, entered the final round with a four-shot lead after posting a record-breaking 63 on Saturday evening. But Lowry had to show a different side to his game the following day as he posted a battling 72 on an extremely wet and windy final afternoon to reach 15 under par and get his hands on the iconic Claret Jug.

“I can’t believe it, this is not going to sink in for a few days,” said the five-time European Tour winner, who jumps from fourth to first in the Race to Dubai Rankings after picking up 1,665 Race to Dubai points.

“Walking down 18 I could not believe this was happening to me. I feel like I am in an out-of-body experience.

“I was so calm. It’s just incredible to be sitting here with a trophy in front of me. Look at the names on it.

“I hit my tee shot on 18, that was it, and I started to enjoy it then. It was just incredible to walk down 18. The crowd was going wild. I tried to soak it in as much as I could. I didn’t even know going out this morning if I was good enough to win a major. And look, I’m here now, a major champion. I can’t believe I’m saying it, to be honest.”

Englishman Fleetwood secured 1,113 Race to Dubai points with his runner-up finish which seals a seventh consecutive appearance at the season-ending DP World Tour Championship for the 2017 Race to Dubai champion after moving up to sixth from 50th.

American Tony Finau finished two shots further back to secure his best Major finish in third place, which saw him jump up 50 places in the Race to Dubai Rankings from 71st to 21st on 1,121.9 points for the season.

The inaugural DP World Tour Championship victor edges closer to continuing his remarkable record of appearing in every edition of the European Tour’s finale after moving up to 30th from 67th in the Race to Dubai Rankings.

Scotland’s Robert MacIntyre, American Rickie Fowler and English duo Tyrrell Hatton and Danny Willett completed the top six after finishing on five under par. MacIntyre jumps up to 14th from 21st in the Race to Dubai Rankings while Hatton moves up to 37th from 51st.

Last year’s DP World Tour Championship winner Willett moves closer to defending his title after jumping up to 57th from 105th with a season tally of 585.1 Race to Dubai points.

The top 50 players in the Race to Dubai Rankings will contest the season-ending $8 millionDP World Tour Championship at Jumeirah Golf Estates in Dubai from Nov.21-24 where $3 million will be up for grabs for the winner, making it the richest prize in world tournament golf.

Top 10 Race to Dubai Rankings after The 148th Open Championship