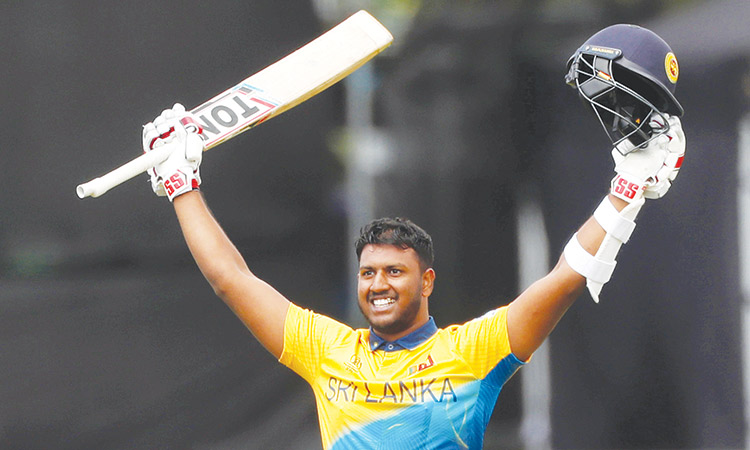 Sri Lanka’s Avishka Fernando celebrates after scoring a century against the West Indies on Monday. Reuters

Chester-le-Street: Ton-up Nicholas Pooran played the innings of his life but Angelo Mathews delivered the ball of the match to get his wicket and help Sri Lanka to a 23-run victory over the West Indies in an inconsequential but thrilling World Cup tie here on Monday.

With both teams not standing a chance to qualify for the semifinals, there was only pride to play for.

But it turned out to be a rip-roaring affair in the end in which Pooran slammed 118 off 103 balls (4x11, 6x4), his maiden hundred, to get West Indies very close to gunning down 339 for victory, which would have been the highest successful run-chase in World Cup history.

But Mathews, bowling for the first time this year in the 48th over, had Pooran caught by wicketkeeper Kusal Perera in the very first ball and celebrated his first wicket since December 2016 in grand fashion.

With 31 runs needed off 17 balls and two wickets in hand, it was a bridge too far in the end for the Windies as they finished at 315/9 in 50 overs. For Sri Lanka, veteran pacer Lasith Malinga (3/55) was the pick of the bowlers.

Gayle looked good during his stay at the crease but holed out to Jeffrey Vandersay off Kasun Rajitha. Malinga had removed Ambris and the talented Hope earlier on.

Hetymer also failed to continue after steadying himself as he was run out. Pooran then stitched together a 61-run stand with skipper Jason Holder (26) for the fifth wicket before the latter was caught at mid on by substitute Jeevan Mendis off Vandersay.

Pooran and Carlos Brathwaite (8) also shared a 54-run partnership but Brathwaite was also run out to bring Fabein Allen to the crease. It was then that the pair took the game to the opposition with counter-attacking batting as Allen brought up his maiden 50 off just 30 balls.

But just when the duo looked good to guide their team across the line, a mixup saw Allen getting run out (51; 32b, 4x7, 6x1) with 57 needed off 36 balls. Pooran got to his 100 in 92 balls and looked all set to pull off a memorable victory for his side before Mathews trumped him and swung the tide in Sri Lanka’s favour.

Put into bat by West Indies skipper Jason Holder at the Riverside Ground, Sri Lanka made a strong start to the innings. After captain Dimuth Karunaratne and Kusal Perera added 93 runs for the first wicket, it was Holder who gave the Windies the breakthrough by forcing an edge off Karunaratne (32) which was gleefully accepted by Shai Hope behind the stumps in the 16th over.

Two overs later, Perera (64; 51 balls, 4x8) was run out, but Fernando and Kusal Mendis went about undoing the damage, adding 85 runs for the third wicket. Fernando anchored the middle order even after the dismissal of Mendis (39), setting up strong partnerships with Angelo Matthews and later Lahiru Thirimanne.

Matthews (26) was done by an inch perfect yorker from Holder and it looked like Oshane Thomas had got Thirimanne just two overs later by getting him to hit the ball straight to the fielder at midwicket. But it turned out that he had overstepped by a fair distance. Thirimanne went on to finish the innings with unbeaten on 45 off 33 balls, hitting four boundaries in the process.

Fernando was dismissed in the 38th over by Sheldon Cottrell, whose trademark salute celebration seemed to be more of an acknowledgement of the batsman’s efforts than in jubilation.

Holder (2/59) was the pick of the West Indies bowlers while Cottrell, Thomas and Fabian Allen picked up one wicket each.

Meanwhile, Pop idol Rihanna lent glitz and glamour to the World Cup on Monday as she turned up in Chester-le-Street to watch the struggling West Indies take on Sri Lanka.

“Look who came to #Rally with the #MenInMaroon today! Hey @rihanna!”, the West Indies tweeted on their official account, along with photos of her watching the game in northern England.

Dressed in white and wearing sunglasses, the Barbados-born singer gave vocal support to the two-time champions, who have flopped badly at the World Cup, winning just one match so far.

But she failed to lift the side, who will be heading home after the group stage in England and Wales, as they slipped towards a sixth defeat in eight matches.

In May, she launched a groundbreaking partnership with LVMH to launch a luxury fashion brand based in Paris that will make ready-to-wear clothes, shoes and accessories.