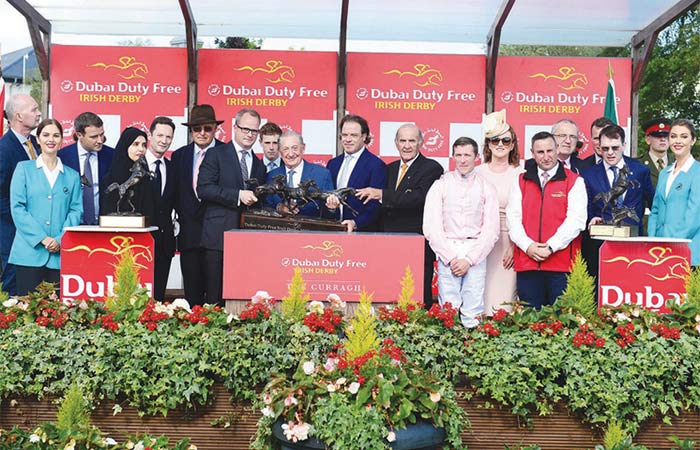 Winners pose with the officials during the presentation ceremony of the Dubai Duty Free Irish Derby at the Curragh Racecourse on Saturday.

The Dubai Duty Free Irish Derby is the feature event of the festival of high-octane racing, with the best horses, jockeys and trainers in the world taking each other on in front of an enthralled audience revelling in supreme hospitality.

The festival and day, which is sponsored by the world’s leading airport retailer Dubai Duty Free, was a great success filled with fantastic racing, fashion and fun.

Speaking at the press conference after the exciting Dubai Duty Free Irish Derby took place, Executive Vice Chairman and CEO of Dubai Duty Free (DDF), Colm McLoughlin said, “I would like to offer my huge congratulations to the winning connections and also to compliment The Curragh Racecourse on the wonderful new facility.

The development is very impressive, this is the 12th Dubai Duty Free Irish Derby, however we have been involved with the Curragh since 2002.

“We are delighted to be the title sponsor of this prestigious race and thoroughly enjoyed the action and excitement of the festival.”

The official attendance on the day was 11,957 with the crowd enjoying the new facilities and basking in the Kildare sunshine. McLoughlin, and his wife Breeda McLoughlin, hosted 320 people in the DDF private pavilion on the finish line where several famous faces were spotted.

The Most Stylish Person Competition was also sponsored by Dubai Duty Free. Moira O’Toole, a teacher from Kilkenny was declared the winner by the judges Breeda and Bairbre Power, the Dubai Duty Free Irish Derby Lifestyle Ambassador and fashionista and broadcaster Lorraine Keane.

Moira wore an apple green dress with matching hat, which she made herself. The 1950’s inspired dress was from a boutique in Kilkenny, called Mimis. For her efforts Moira won a trip to Dubai for two, courtesy of Dubai Duty Free. She will stay at the Five Star Jumeirah Creekside Hotel for five glorious nights and will enjoy a €1,000 Dubai Duty Free shopping voucher.

Meanwhile, next week the team from Dubai will move from the east to the west of the country as The Dubai Duty Free Irish Open will place in Lahinch Golf Club, Co. Clare (Ireland) from July 4-7, continuing an association that began in 2015.

Elsewhere, Classic Fit ran very well to finish second in the G2 Mother Goose Stakes over an extended mile on dirt at Belmont Park on Saturday. It was the first start of 2019 for the three-year-old Bernardini filly, trained by Michael Stidham and ridden by Jose Lezcano, who made the running at a steady pace, with the first quarter-mile taking 24.34s and the half-mile 49.13s.

She was briefly headed on the final turn, but regained the lead after straightening up.

Classic Fit could not contend with the burst of speed inside the final furlong of the winner, Dunbar Road, who scored by two and a half lengths in 1m 43.54s, but kept on gamely, finishing four lengths ahead of the third Jeltrin.

Stidham said: “I was very, very pleased with that performance.

“She had been training so well that we wanted to try her in this race and she gave us a thrill.

“That is an awfully nice filly who beat us – I am proud of Classic Fit.

“We were testing deep waters in this race and there are so many Graded Stakes opportunities open to her now.

“I imagine we will keep her at a mile or a mile and an eighth.”

Classic Fit has been successful on three of her five starts and finished second and third on the other two. Her victories have all come at a mile - in the Hut Hut Stakes on dirt at Gulfstream Park in December, an allowance optional claimer on Tapeta at Presque Isle Downs in October and a Monmouth Park maiden on dirt in September. 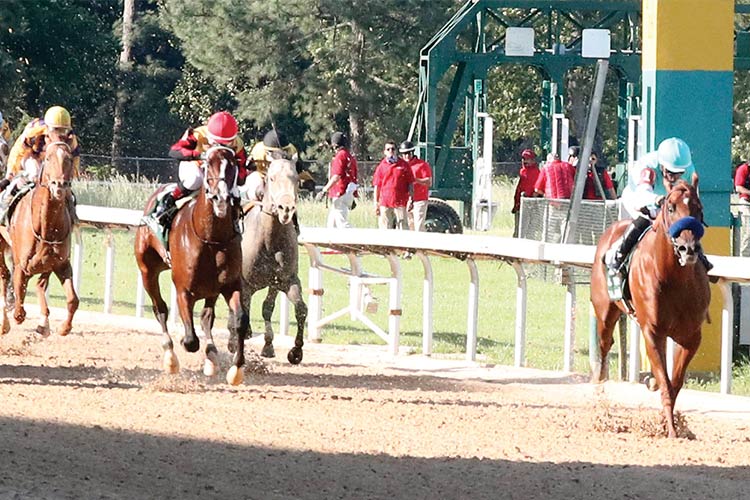 The 146th Derby usually would have dominated the first Saturday in May, but it was pushed back to Sept. 5 by the coronavirus pandemic.