Accident rules India’s Neeraj out of Amir fight in Jeddah 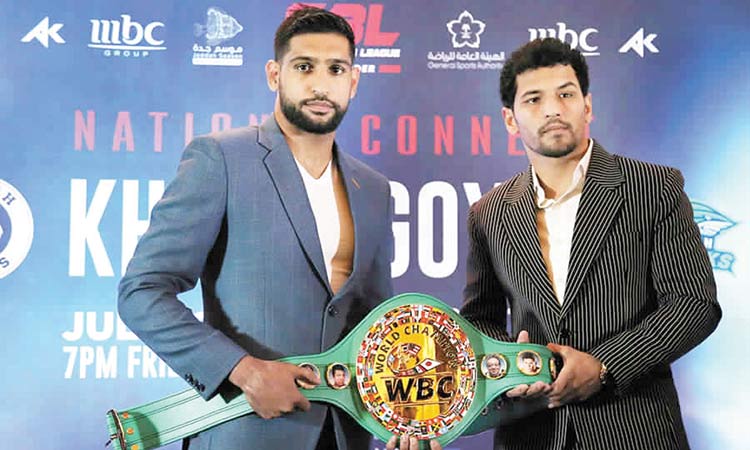 Indian boxer Neeraj Goyat (right), who who was preparing for his mega fight against Amir Khan, met with a car accident on Tuesday night.

Indian boxer Neeraj Goyat, who has met with a car accident while travelling from Yamunanagar to Mohali, was on Wednesday ruled out of his key clash against Pakistani-origin British boxer Amir Khan at next month’s WBC Pearl World Championship bout in Jeddah, Saudi Arabia. Australia’s Billy Dib has instead been named to replace Neeraj as Amir’s opponent.

“I hope Neeraj recovers quick and gets fully fit again,” he added.

The 33-year-old Dib is a veteran of 48 professional bouts and his last fight ended in a defeat to American Tevin Farmer for the IBF world super featherweight title. He had announced his retirement after that, but eventually reversed the decision.

The Indian pro-boxer, who was the WBC Asia welterweight title-holder, was supposed to take on Amir, a two-time world champion and Olympic silver-medallist, at the King Abdullah Sports City in Jeddah on July 12. According to the 27-year-old from Haryana, it was supposed to be the biggest test of his career. Amir held the WBC silver welterweight title from 2014 to 2016 but his bid to become a two-weight champion fell short in his last outing against Terence Crawford in New York for the WBO welterweight title.

With a car accident ruling Neeraj out of the much-touted clash against Amir, the story of Indian boxers getting jinxed continues unabated.

Star boxer Vijender Singh’s much-awaited professional debut in the USA, scheduled for April 12, also got delayed after he injured himself during a sparring session in Los Angeles in March.

Like Vijender, who was in the prime of his powers before picking up the injury, Neeraj is the WBC Asia welterweight titleholder and has a record of 11 wins including two knockouts, three losses and two draws till date. Vijender is so far unbeaten in his 10-bout pro career and claimed the WBO Asia Pacific super welterweight title during his stint with England. The celebrated Indian turned professional in 2015.

Meanwhile, the IOC stripped the AIBA of the right to run the event at next year’s Games in May after an investigation into alleged serious mismanagement at boxing’s crisis-ridden ruling authority. The IOC members rubber-stamped that decision at a meeting in Lausanne.

The IOC will now organise boxing in AIBA’s place, the federation becoming the first to have been stripped of its right to organise its own sport at an Olympics.

Qualification, split between four continents -- Africa (Dakar), Europe (London), Asia/Oceania (China) and Americas (Buenos Aires) -- will be held between January and the end of March, with a final global qualifier to be held in May in Tokyo.

The IOC has appointed Morinari Watanabe, Japan’s gymnastics chief, to run a taskforce to organise qualification and the tournament itself in Tokyo. Formed in 1946, AIBA has overseen decades of signature Olympic moments, notably the 1960 gold medal win in Rome by Muhammad Ali, then known as Cassius Clay. But its reputation has been tarnished in recent years as it careened from crisis to crisis.

Relations between AIBA and the IOC took a sharp downward turn following the 2016 Rio Games, when 36 officials and referees were suspended amid allegations of bout fixing.

An internal investigation by AIBA raised deeper questions about the judging in Rio, with particular suspicion falling on a French official.

Then in 2017, AIBA executives forced out the body’s president, C.K. Wu, amid claims of multi-million dollar accounting fraud.

Wu, a Taiwanese national, denied wrongdoing and remains a member of the IOC, an indication that he retains the support of senior Olympic officials.

Wu was ultimately replaced by the controversial Uzbek businessman Gafur Rakhimov, who the US Treasury Department has linked to “transnational criminal organisations”.

Rakhimov, who stepped aside in March, vehemently rejects such charges and insists the allegations against him are “politically motivated lies”.