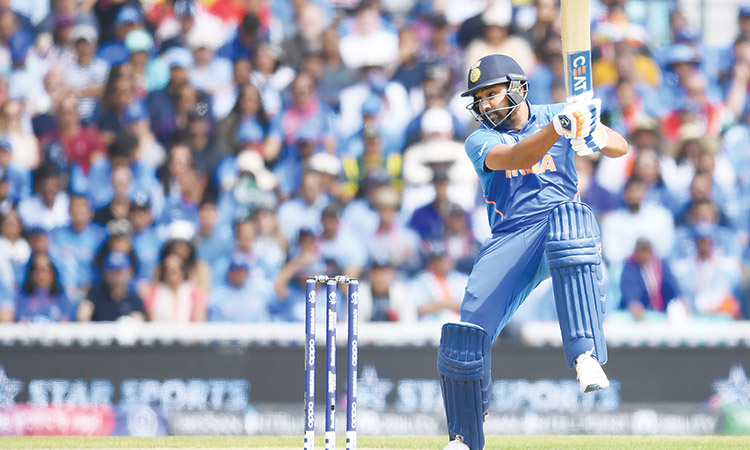 India’s Rohit Sharma has brought out the square-batted shots to tackle the short-pitched balls bowled at him during this World Cup.

New Delhi: India opener Rohit Sharma has been in imperious form in the ongoing World Cup, having scored 319 runs in the three matches that the Men in Blue have played so far.

His runs at the top of the order made sure that a solid foundation was laid for the big hitters to launch into the attack towards the latter stages of the games. In all the three completed matches, Rohit has had to deal with a lot of short-pitched bowling from the opposition pacers in challenging conditions. But the India vice-captain rose to the occasion and brought out the square-batted shots to tackle the short-pitch balls bowled at him -- both outside the off stump and at the body. In fact, his most productive scoring shot in this tournament has been the cut.

In the tournament opener against South Africa, the Proteas pacers, especially Kagiso Rabada, had peppered him with a lot of short stuff on a difficult batting track at the Ageas Bowl in Southampton. However, the ‘Hit-man’ made sure he rose to the challenge and scored off the short-pitched deliveries.

Out of the 122 runs Rohit scored in that match, 30 runs (24.59 %) came in the area between point and third man. And the most productive shot for him was the cut shot through which he amassed 22 runs, which included 4 fours.

Even against Australia, the right-handed Indian opener was attacked with a lot of short-pitched deliveries by Mitchell Starc and Pat Cummins. His 57-run knock along with Shikhar Dhawan’s hundred was enough to help India set the Aussies a target of 353.

Against arch-rivals Pakistan, the opener once again smashed a blistering ton (140 off 113 balls) and helped India post 336/5. Out of the 140 runs, the 32-year-old collected 28 runs (20 %) in the backward point region. The cut shot in this inning yielded him 30 runs, which included 4 fours and a six.

It can be predicted without a doubt that Rohit will be peppered with these deliveries throughout the tournament. But to the batsman’s advantage, the cut has been the secret of his success in this edition of the showpiece event.