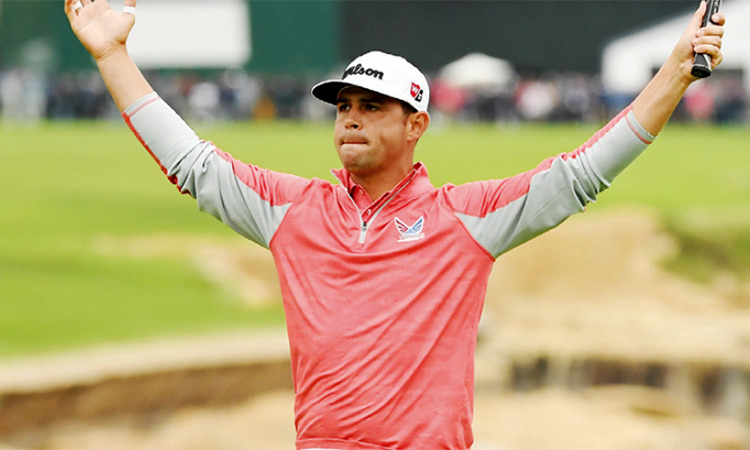 Gary Woodland celebrates his victory at the US Open. Agence France-Presse

pebble beach: Gary Woodland stared down the top player in the world to win the 119th US Open as a kinder, gentler Pebble Beach produced yet another classic major championship.

Don’t let Woodland’s 13-under par total fool you –– the 35-year-old American needed shot-making skill and intestinal fortitude to come through on Sunday for his first major title, a triumph that denied Brooks Koepka’s bid for an historic third straight US Open victory.

Koepka -- winner of the last two PGA Championships as well as the prior two US Opens and a runner-up in April at the Masters -- was breathing down his neck when Woodland produced a pair of shots that will live in US Open history.

“The idea was to play to win,” Woodland said of his three-wood second shot to set up a birdie at 14.

But his signature moment came at 17 -- the same hole where Jack Nicklaus set up a tap-in birdie with a stinging one-iron in 1972 and Tom Watson chipped in 10 years later to deny Nicklaus a fifth US Open title. Woodland, up by two with Koepka threatening to birdie or even eagle the last, found the wrong spot of the green with his tee shot at 17, landing 30 feet from the pin and on the wrong side of a ridge.

Knowing he couldn’t get a putt close, Woodland pulled out a wedge and hit a perfect pitch that left him a tap-in for par.

He didn’t even need the 30-footer for birdie at 18, although his 69 did make him just the fifth golfer to shoot four rounds in the 60s in a US Open.

Koepka was the fourth, but the first to do so and not win. After the criticism and carping over conditions at wind-whipped Shinnecock Hills last year, players were gushing in their praise of Pebble Beach -- and of the US Golf Association for letting the jewel of a course shine.

“It’s perfect,” said Phil Mickelson, who was only sorry he didn’t play well enough to challenge in one of his last remaining chances to complete a career Grand Slam with a US Open crown. “It’s identifying the best players. It’s making the players the story.” Pebble Beach remained receptive in cool, cloudy conditions, and only a gentle sea breeze stirred on Sunday.