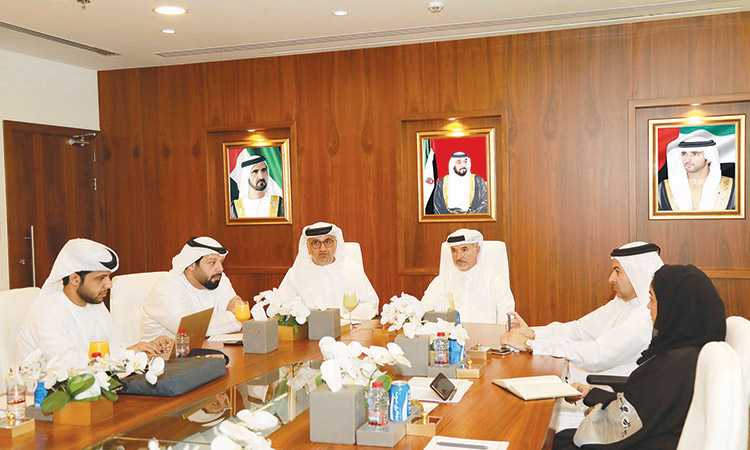 Saeed Hareb, Aref Al Awani, Nasser Aman Al Rahma and other members of the organising committee and representatives of RCS Sports and Events during the meeting at DSC headquarters.

DUBAI: The organising committee of the UAE Tour, the only UCI World Tour cycle race in the Middle East, met recently to adopt the final report on the inaugural edition of the Tour, which was held from Feb.24 to March 3.

All 18 UCI World Teams took part in the 2019 UAE Tour, which was a first for Asia, and the race brought some of world cycling’s biggest names like Alejandro Valverde, Tom Dumoulin, Italian all-rounder Vincenzo Nibali, Fernando Gaviria, Mark Cavendish and Elia Viviani for the ride through all seven emirates of the country. But after seven gruelling stages and 1,073kms, it was Slovenian Primoz Roglic of Team Jumbo–Visma, who took the overall honours, topping the General Classification leaderboard ahead of World Champion Valverde and best young rider David Gaudu.

The organising committee thanked the country’s wise leadership for their patronage of sports in general, and their directives to launch a World Tour race that bears the name of the UAE and their generous support for the Tour. His Highness Sheikh Mohammed Bin Rashid Al Maktoum, Vice President and Prime Minister of UAE and Ruler of Dubai, was present in person as the cyclists passed through the Al Marmoom Desert Conservation Reserve during stage Four of the Tour.

The organising committee also congratulated the three Sports Councils of Abu Dhabi, Dubai and Sharjah for their joint efforts in organising the UAE Tour, which was a huge logistical challenge as it passed through different cities and emirates of the country, with images of the peloton riding through the country’s vast deserts, challenging mountains and idyllic coast reaching homes in more than 200 countries.

The organising committee also thanked the UAE Cycling Federation as well as the sponsors and different government entities for their teamwork and the big part they played in the success of the inaugural edition of the UAE Tour.

The organising committee also reviewed all the organizational notes and proposals from different sides at the meeting, and stressed on the importance of building on the success of the first edition of the UAE, thereby contributing to the objectives of organising the UAE Tour.