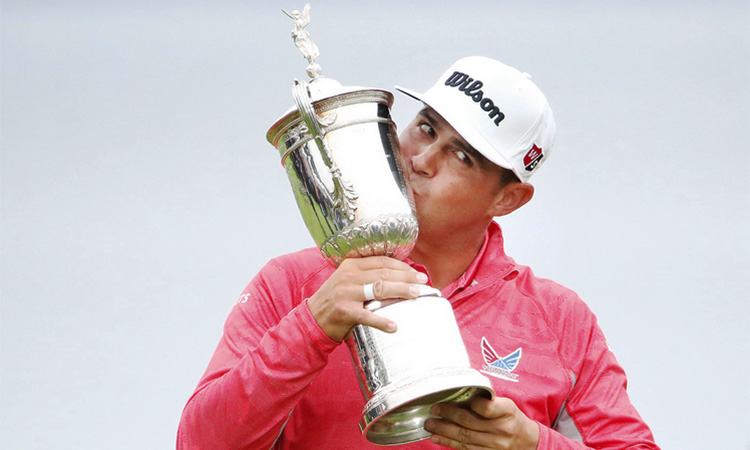 Gary Woodland poses with the trophy after winning the US Open at Pebble Beach Golf Links on Sunday. Agence France-Presse

A lifetime of work came to fruition for Gary Woodland at Pebble Beach, where the 35-year-old from Kansas — who turned to golf when he felt his basketball dream just wouldn’t pan out — captured his first major title at the 119th US Open.

“I’ve been surrounded by amazing people and I always just wanted to be successful. I fell in love with golf, and it’s transcended to today.”

Woodland, long known as a long-hitter, has worked tirelessly on other aspects of his game. But the wins have been few — three on the US PGA Tour since he first joined in 2009, none in 30 prior majors that didn’t even produce a top-10 finish until the PGA Championships of 2018 and ‘19.

“It’s getting there,” he said of his game, and he certainly had everything he needed this week.

With Brooks Koepka -- winner of four of his last eight majors, runner-up at this year’s Masters and chasing an historic third straight US Open — breathing down his neck, Woodland didn’t blink.

His gutsy three-wood second shot at the par-five 14th on Sunday led to a birdie and a two-shot lead. He preserved it with a perfect pitch from the green at 17, where his tee shot left him on the wrong end of the hourglass putting surface.

Even playing partner Justin Rose, his own hopes ended by a trio of back-nine bogeys, gave him a little fist bump after that one.

By the time he got to 18, a raft of the popular player’s peers were at the green, where he punctuated the victory by rolling in a 30-foot birdie putt.

When it was all over, Woodland had four rounds in the 60s -- including a second-round 65 that matched the lowest ever shot in a US Open at Pebble Beach. His 13-under total was one better than Tiger Woods’ 12-under winning total on the same course in 2000.

“People probably growing up said the US Open wouldn’t suit me, because I’m a long hitter, I’m a bomber,” Woodland said.

“Coming to Pebble Beach, on top of that, it’s a shorter golf course. And I went out and proved, I think to everybody else, what I always believed, that I’m pretty good.”

Woodland took up a golf scholarship at the University of Kansas after he realized that he’d never be a top collegiate basketball player, despite starring in the sport in high school.

Lean years on the tour have been accompanied by some dark times off the course. He and wife Gabby were expecting twins in 2017 when they learned one had died in the womb. Son Jaxson was born that year, and the two are now expecting twin girls.

Far from a household name, Woodland attracted a wealth of fans this year when the PGA Tour shared a video of him inviting Amy Bockerstette, a 20-year-old with Down Syndrome, to play a hole with him during a practice round at the Phoenix Open.

Bockerstette, an accomplished golfer, hit into a bunker at the par-three 16th, blasted out to the green and made the par putt, telling herself “You got this.”

“I told myself that a million times today,” Woodland said.

“I’ve got this.” Woodland’s enthusiastic response to Bockerstette -- he called it his most exciting moment on a golf course -- was part of the video that went viral, and the Bockerstette family were among those pulling for him on Sunday.

So were the raft of Woodland’s peers who turned out on the 18th green to see him lift the trophy.

“He deserves it,” Koepka said. “He’s worked hard and I’m happy for him.”