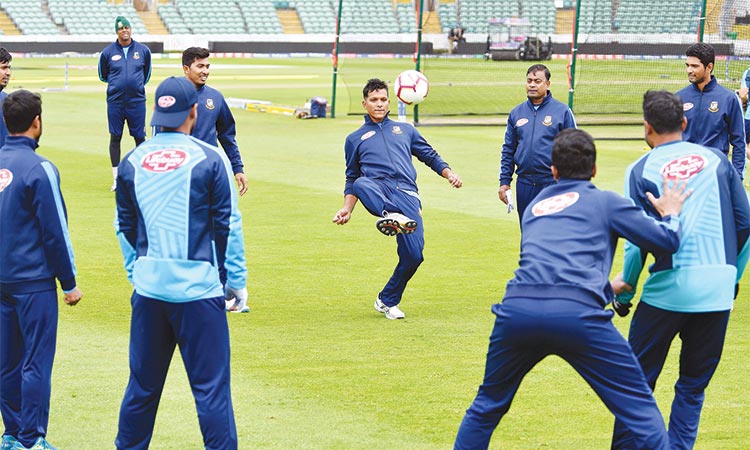 Bangladesh players play football during a training session at The County Ground in Taunton, south-west England, on Sunday. Agence France-Presse

Taunton: West Indies captain Jason Holder admits his spluttering side will be underdogs when they face Bangladesh in a crucial World Cup clash on Monday.

Beaten in two of their four group matches, Holder’s team desperately need to secure their second win of the tournament as they chase a semi-final berth.

Level on three points after four games apiece, the West Indies and Bangladesh meet at Taunton hoping to deliver a potentially fatal blow to their rivals’ chances of progression.

Holder concedes the West Indies don’t go into the match as favourites, but he is confident that will spur his players to upset the odds.

“If you want to put us in the underdog category, fair enough,” he told reporters on Sunday.

“We’ve played them quite a bit in the past and they’ve got the better of us, but it’s a different occasion and there’s lots at stake, so we’re all up for it.

“I don’t think there are any easy teams in this World Cup. We’re mid-table with five games left and the ball is in our court.

“We’ve got to play some consistent cricket going into the back half of the tournament.

“It’s quite a good stage to pick up some momentum. It’s a challenge against Bangladesh, so we just want to get over them and move forward.”

West Indies will persist with their own star all-rounder, Andre Russell, despite him limping off at the Rose Bowl against England after bowling only two overs.

Russell’s creaky knees are struggling to allow him to complete games.

“We have been trying our best to keep him on the park, but it is proving difficult,” Holder says.

“We have to persist. He is here for a reason. He can be a match-winner for us. We have just got to cope with him. Got to do everything we possibly can with him to keep him on the park.”

The risk is worth it? “Yes.” After four games each, they have one win each. It’s time to get moving if West Indies want to reach their first World Cup semifinals in 23 years, and Bangladesh for the first time.

Holder says, “We have got to make sure we beat Bangladesh.”

The West Indies’ potentially explosive batting line-up has yet to properly fire in this year’s World Cup and Bangladesh captain Mashrafe Mortaza expects the Tigers to tame them in the west country.

The use of spinners Mehedy Hasan and Shakib Al Hasan, both in wicket-taking form so far this World Cup, will be crucial to Bangladesh’s game-plan at a ground with short boundaries.

“It’s a very important match for us, especially losing a few points in the last three matches,” Mashrafe said. “We’ve been quite successful against them with some off-spinners. And if you look at recently, Mehedy bowled really well against them. Also he’s bowling so well in this World Cup as well.

“Obviously the top five West Indies batsmen are left handers, and Mehedy bowled against them really well too. “So it’s a positive sign. It’s a small ground, too, so we have to think about it as well. West Indies have so much power to do it.”

The pitch, conditions and strategy will be different at Taunton, but Steve Rhodes, coach of Bangladesh over the past year, is confident they can handle the West Indies bumpers.