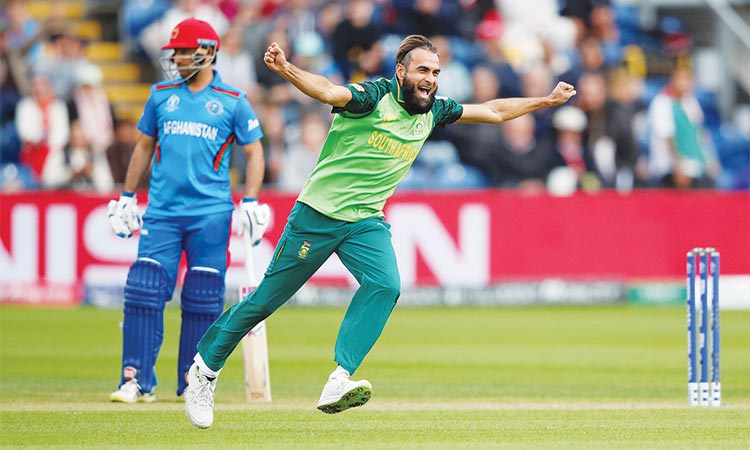 Cardiff: Faf du Plessis said South Africa must win all their remaining games if they are to have any chance of reaching the World Cup semi-finals after they notched their first win against Afghanistan on Saturday.

The Proteas endured a torrid start to their campaign in England and Wales, losing their first three matches before a no result against the West Indies.

But the outcome never looked in doubt in Cardiff, with man-of-the-match Imran Tahir taking four wickets as South Africa bundled Afghanistan out for a meagre 125 before cantering to victory by nine wickets.

South Africa skipper Du Plessis said his players had upped their game in the match, which was reduced to 48 overs per side after two rain delays.

“Hopefully this is a real confidence booster for everyone on the team,” he said. “And there’s a little bit of weight that you feel that’s off your shoulders now, so now the guys — we know what’s lying ahead.

“We need to win every game that we play. But today was a really good step in the right direction.”

Praising his bowlers, the South Africa skipper said: “Morris and Tahir were fantastic in the middle overs as they got wickets. He (Tahir) has single-handedly made us a strong team in the last two years with his ability to take wickets in the middle overs.

“Really pleased with the bowlers, I thought once again Andi and Chris were very good through the middle. The two of them are starting to put in consistent performances now and that’s very pleasing.

“Imran as always was special, but especially on a wicket like that, where it’s not suited for spinners.

“To get four wickets like that was an amazing bowling performance.”

The other pleasing thing for South Africa was that while in other circumstances they might have had to rely on Kagiso Rabada scything through the most brittle batting line-up on show at this World Cup, on this occasion he was only required to hold up an end.

South Africa, missing injured paceman Dale Steyn, lost to England, Bangladesh and India before picking up a point in their rain-ruined match against the West Indies.

Their win on Saturday lifts them to seventh in the 10-team table after five matches but their chances of qualifying for the semi-finals by reaching the top four are remote, with New Zealand and Australia still to come in their remaining four games.

South Africa took their time in chasing down their target but Afghanistan, who look out of their depth at the World Cup, did not have the weapons to trouble their opponents batsmen.

Hashim Amla (41 not out) and Quinton de Kock (68), put on 104 for the first wicket before Afghanistan captain Gulbadin Naib had De Kock caught by Mohammad Nabi.

Amla and Andile Phehlukwayo saw South Africa over the line as they reached their revised target of 127 in the 29th over.

“In the next four games, net run rate is not going to play a massive role if you win those games. So we need Amla to score runs for us, hence he needed a not-out innings today,” he pointed out.

There was little sign of the carnage to come when Hazratullah Zazai and Noor Ali Zadran put on 39 runs for Afghanistan’s first wicket.

Zazai was the first to go and when leg-spinner Tahir bowled Zadran for 32 with his first ball and then caught Asghar Afghan off his own bowling for nought in the same over, Afghanistan were in deep trouble.

Nabi became the third Afghan batsman to lose his wicket in the space of seven balls when he was bowled by Phehlukwayo.

When Naib was caught by Aiden Markram of the bowling of Tahir, Afghanistan were teetering on the brink of disaster at 77-7.

Rashid Khan struck 35 from 25 balls, with six fours, but even his late flourish could only lift the score to 125.

“We didn’t expect that spell from Tahir,” said Nabi. “We did well against the seamers but the batsmen didn’t take responsibility in the middle. We need a good total on the board so we needed a partnership. We made a lot of mistakes.

“We have a lot of batsmen in the team. We need in the middle of the innings them to push the scoreboard up.”