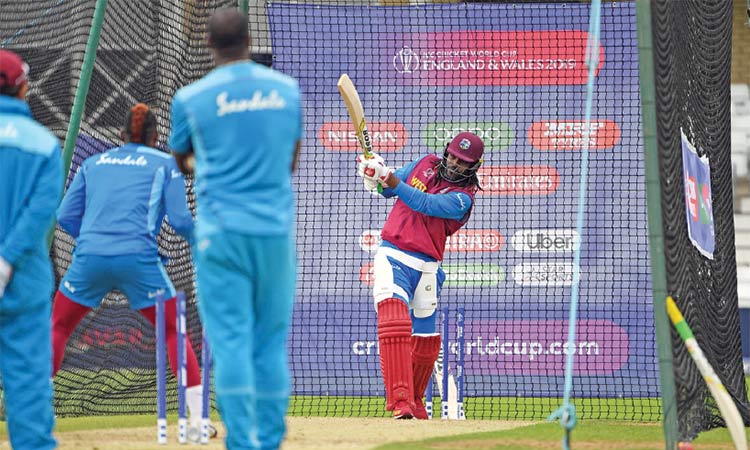 West Indies’ Chris Gayle bats in the nets during a training session at Trent Bridge in Nottingham. Agence France-Presse

Clive Lloyd has warned the West Indies to play “smart cricket” if they want to make an impact at the World Cup. Lloyd, who captained the West Indies to victory at the 1975 and 1979 tournaments, saw the side impress with a rout of Pakistan in their opening match, but then let Australia off the hook as the holders beat them by 15 runs.

The Windies had Australia in trouble, but some wayward bowling allowed Nathan Coulter-Nile to score 92 from 60 balls before Mitchell Starc’s five-wicket haul clinched the win at Trent Bridge.

Lloyd believes the West Indies have the weapons to make a strong run at the tournament, but the 74-year-old called on them to show more cunning at key moments.

“The West Indies must start to play smart cricket because they have two real big games coming up against South Africa and England. Therefore they have to be on top of their game as I’m sure they’d want to qualify,” he said.

“They should have players who are able to win games, especially when the pitch was quite placid and devoid of bounce and movement during that stage of the (Australia) game.”

“I think on another day, with a better analysis of the situation they could have won that game and this would have given them the impetus to realise that they were serious contenders to qualify for the latter stages of this competition.”

Lloyd was especially frustrated that the West Indies batting folded when they were apparently on course for victory.

Accusing them on playing too carelessly, Lloyd said: “There is no reason why they should be almost bowled out on a pitch like that at Trent Bridge, but they tried to hit the aerial shots and started throwing wickets away.

“The players have to realise that this is not Twenty20. The batsmen need to turn those scores of 30 and 40 into bigger scores and they must be aware that all these teams have world-class bowlers at their disposal.”

Lloyd’s former side can get back on track on Monday when they face South Africa, who are in turmoil after losing all three of their matches.

“South Africa are up next and while they haven’t performed to their ability, Windies have to be aware of the job at hand as South Africa is in danger of missing out on the top four if they lose,” Lloyd said.

“They now have to re-group, look at the mistakes they made and rectify them so that they can return to their winning ways. I’m still feeling positive about the West Indies overall.”

Holding, commentating on television, was scathing about the “weak” officiating on show at Nottinghamshire’s headquarters.

“The umpiring in this game has been atrocious,” said Holding, one of Cricket’s all-time leading fast bowlers.

The 65-year-old Jamaican added Gaffaney and Palliyaguruge had caved into pressure created by prolonged Australia appeals.

“For one, even when I was playing and you were not as strict as they are now, you were allowed one appeal,” recalled Holding, who infamously kicked down the stumps during a 1979/80 Test in Dunedin after his appeal to have New Zealand’s John Parker caught behind was rejected by umpire Fred Goodall.

“You don’t appeal two, three, four times to the umpire. They are being intimidated which means they are weak.

“This has been an atrocious bit of umpiring by both (Gaffaney and Palliyaguruge).”