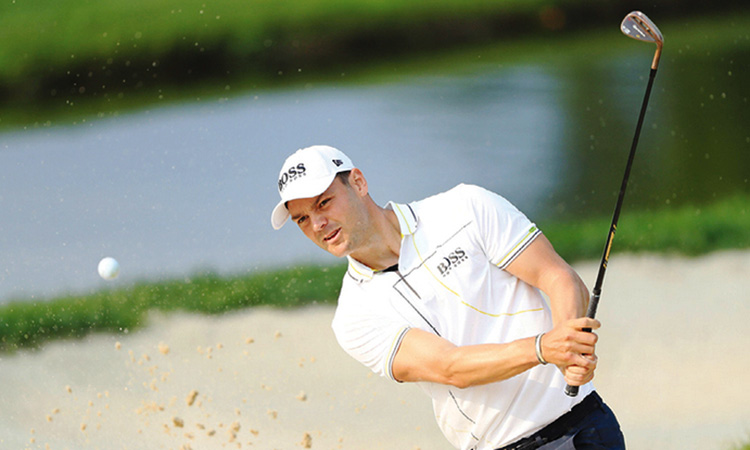 Martin Kaymer hits his fourth shot on the ninth hole during the second round of the Memorial tournament in Dublin on Friday. Agence France-Presse

Former world number one Martin Kaymer, seeking his first win since his 2014 US Open triumph, shared the halfway lead at the US PGA’s Memorial Tournament Friday with rookie Lee Kyoung-hoon and Troy Merritt.

Germany’s Kaymer, now ranked 186th in the world as he battles his way back from wrist and shoulder injuries, birdied all four of the par-fives at Muirfield Village in Dublin, Ohio, rolling in a five-footer at the par-five seventh — his 16th hole of the day — to take a one-stroke lead.

But he bogeyed the par-four ninth, where he was unable to get up and down from a greenside bunker, his four-under par 68 giving him a nine-under total of 135

South Korea’s Lee positioned himself for a weekend run at a first US PGA Tour title with a bogey-free five-under par 67.

Merritt, a two-time tour winner who is working his way back after having surgery to remove a rib in January, had an eagle and six birdies in a six-under 66.

Merritt teed off early and full expected someone to move past him atop the leaderboard. Kaymer was the only one to do it but he couldn’t stay there.

“We put ourself in a good position for this weekend,” said Merritt, who had surgery in January to remove a rib that was positioned so close to his clavicle that it pinched a vein and caused a blood clot.

The leading trio were one stroke in front of three-time major-winner Jordan Spieth, who carded a 70 for 136.

Australian Adam Scott carded a 66 to head a group of five players on 137 that also included Rickie Fowler and Emiliano Grillo.

On a day that saw England’s Justin Rose charge up the leaderboard with a spectacular nine-under par 63, Tiger Woods was spinning his wheels with an even par 72 that was marred by an ugly double bogey at the par-five 15th.

Woods was comfortably in the fairway, but found deep greenside rough. After two poor chips he finally put the ball within five feet, then missed the putt for bogey.

“The second shot, by far,” he said of the worst error on the hole. “I could hit that ball 50 yards right of the flag and be fine. Anything inbounds right of the flag, I have a chance to make birdie. I just can’t afford to miss it left where that flag is, and I did.”

“Seems like everyone is bunched together,” he said. “I just need to get something going in the front nine where the pins are definitely gettable tomorrow.”