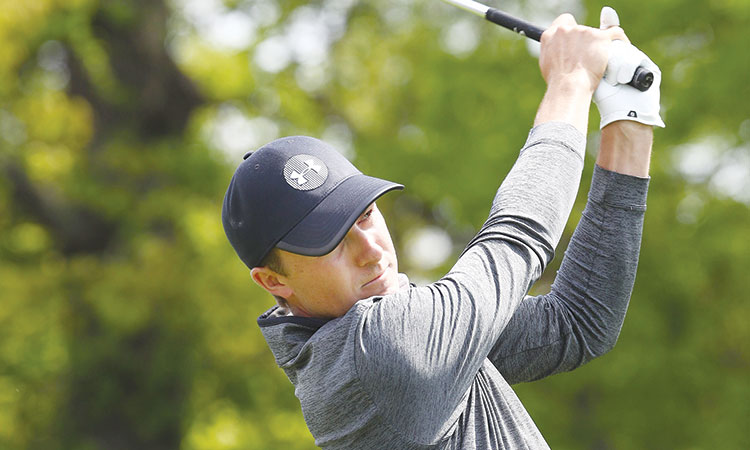 Jordan Spieth plays a shot from the third tee during the second round of the PGA Championship on Friday. Agence France-Presse

Jordan Spieth, trying to complete a career Grand Slam despite a season of struggles, fired a four-under par 66 to take the early clubhouse lead in Friday’s second round of the PGA Championship on five-under par.

Spieth, without a top-20 result this year or a victory since the 2017 British Open, had a two-round total of 135, one shot ahead of US compatriots Dustin Johnson and Daniel Berger.

“Confidence has been there,” Spieth said. “I figured if I stayed out of my own way, stick to one thought, (my game) was in good enough shape to contend.”

Spieth could become only the sixth Golfer to win each of the four majors at least once, joining Tiger Woods, Jack Nicklaus, Gary Player, Gene Sarazen and Ben Hogan. But he doesn’t expect that to create extra pressure.

“I haven’t been in contention since the (British) Open last year. If I put in some good work tomorrow I’ll be in contention on Sunday,” Spieth said.

“At that point, it will be about winning the Golf tournament. I imagine that will take pretty much most of my thoughts. But we’ll see.”

Spieth’s charge came before Koepka teed off. He is in a group with Woods and British Open champion Francesco Molinari, who were battling to make the cut after opening 72s.

The layout at Bethpage Black teased some hopefuls and tortured others but allowed no one to match Koepka’s seven-under par 63 course record from Thursday.

“You don’t expect Brooks to fall at all,” Spieth said. “I felt like I had to be within six or seven going into the weekend.”

Back-nine starter Spieth, the 2015 Masters and US Open champion, sank a 15-foot birdie putt at 11 but made bogeys at 15 and 16 after finding rough and deep weeds off the tee.

Spieth, ranked 39th, answered with a birdie putt at 17, sank another from 20 feet at the first, added another at four and made back-to-back birdies at seven and eight to seize second.

“The front nine is a little more gettable,” Spieth said. “I need to hit more fairways. Scrambled really well. Ball just needs to find as many fairways as DJ or Brooks.”

World number one Johnson, whose only major title came at the 2016 US Open, reeled off five birdies in seven holes in one stretch.

“I’m pleased with the score and pleased with how I played,” said Johnson. “I did a really good job. Hit the ball well. Drove it good. Made some nice putts. Gave myself some good looks at birdies. “I’m going to need to play the next two days the way I’ve played the first two days.”

Johnson could be overtaken atop the rankings by four rivals this week -- Koepka, Woods, Justin Rose and Rory McIlroy.

Woods, who won his 15th major title last month at the Masters to snap an 11-year major win drought, was one stroke under the cut line with hopes of clawing back the gap to Koepka.

Four-time major winner McIlroy, another back-nine starter, suffered a nightmare opening with two double bogeys around a bogey, but four birdies in his last six holes for a 71 put him on the provisional cut line at 143.

New Zealand’s Danny Lee, whose opening 64 left him second to Koepka, battled to a 74. The South Korean-born Kiwi was in the first group off the back nine and double bogeys at 15 and 16 left him six over for the day, but four birdies took him into a share of sixth on two-under with South Korea’s Kang Sung.