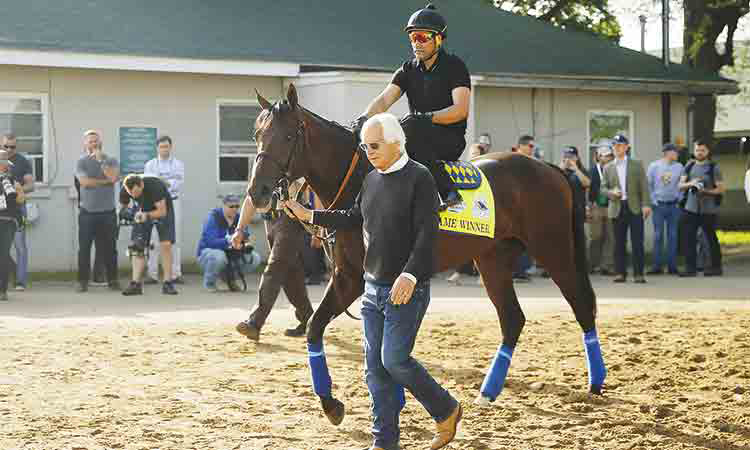 New York: Legendary thoroughbred trainer Bob Baffert is poised to claim another piece of racing history on Saturday as he hunts a record-equalling sixth victory in the 145th Kentucky Derby.

The shock withdrawal of pre-race favorite Omaha Beach with a throat problem on Wednesday has left Baffert perfectly positioned to add to his bulging trophy cabinet at Churchill Downs.

The silver-haired 66-year-old trainer from California will become only the second man to win six editions of the US racing showpiece, joining Ben Jones, who the Derby six times between 1938 and 1952.

Victory on Saturday would cement Baffert’s claim to be the greatest US trainer of his generation.

He is one of only two trainers to have won the Triple Crown twice, claiming the Kentucky Derby, Preakness and Belmont Stakes with American Pharoah in 2015 and Justify in 2018.

Those wins are part of a staggering haul of 15 victories in Triple Crown races, with 15 more in the Breeders’ Cup and three in the Dubai World Cup, the world’s richest race.

The laid-back Baffert insists, however, that he is not preoccupied with Jones’ record as he prepares for this weekend’s Derby, where his three runners -- Game Winner (9-2), Improbable (5-1) and Roadster (5-1) -- are leading the latest bookmakers predictions.

“I don’t even think about it (the record),” Baffert told reporters this week. “I just know what you guys tell me. I don’t want to be thinking about things like that.

“I feel like I’d super-jinx myself. I feel lucky I won one Derby, let alone five,” Baffert added.

“Nowadays the Derby is bigger than it was then. Now it’s pretty intense. Back then, horses ran 40 times a year. The Derby was just a race between other races.”

Wednesday’s withdrawal of Omaha Beach has had a transformative effect on how the Derby is likely to play out.

The Richard Mandella-trained three-year-old had already beaten two of Baffert’s entries this year, downing Game Winner in the Rebel Stakes on March 16 and Improbable in the Arkansas Derby on April 13.

Baffert has kept his cards close to his chest this week, declining to single out a favorite amongst his three runners.

Roadster, however, may emerge as the biggest threat to Game Winner, having beaten his stable mate by half-a-length in the Santa Anita Derby on April 6.

“Roadster was a little late to the party this year, but has done well with the Santa Anita,” Baffert said.

“I’ve got three nice horses, and I just hope that turning for home all three are right there. There’s nothing more exciting than when they’re heading into the stretch of the Derby and your horse is in contention.”

Roadster, who will be ridden by French jockey Florent Geroux, will have to do it the hard way if he is to be successful on Saturday, having been drawn on post 17 on Tuesday.

No horse has ever won the Kentucky Derby from the 17th lane.

“Somebody has got to be first, no?” Geroux said this week. “I think I have the right horse. Sooner or later, someone is going to win from that post.”