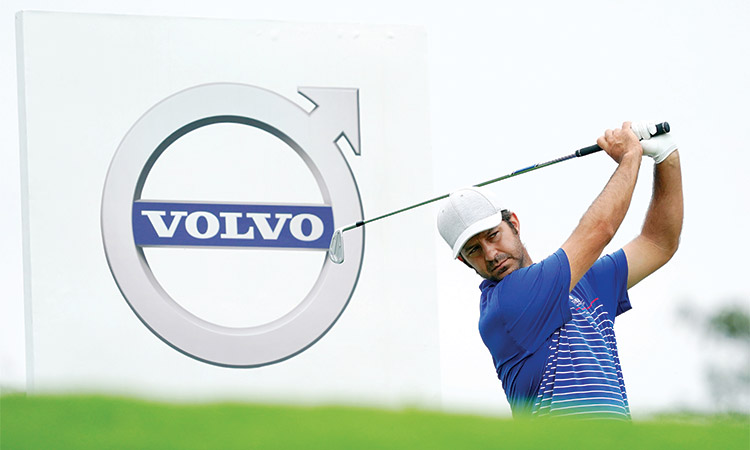 Jorge Campillo hits a tee shot during the first round of the China Open golf tournament in Shenzhen on Thursday. Agence France-Presse

Spain’s Jorge Campillo kept up his red-hot form with a flawless seven-under-par 65 to stand in a three-way tie for the lead after the first round of the 25th Volvo China Open on Thursday.

The Spaniard won his maiden European Tour title at the 229th attempt at Morocco’s Trophee Hassan II last Sunday and showed no sign of slowing down in good scoring conditions in Shenzhen.

An eagle three at the par-five ninth, allied to four birdies saw him complete a stunning front nine in six under par at the rain-softened Genzon golf Club layout.

A 20-foot putt to save par at the 12th crucially kept a bogey off his card and a further birdie at the par-five 17th saw him share top rung on a packed leaderboard with David Lipsky and Tapio Pulkkanen.

“I got a few nights sleep so it was good and I played all right,” said Campillo of his dash across seven time zones from North Africa to play in the far east.

“The eagle on nine was the highlight. I hit a great hybrid on nine. I got an easy putt uphill and I made it.

“If I can keep playing like this I’ll hopefully have a chance on the weekend.”

American Lipsky and Finland’s Pulkkanen, who both enjoyed top 10 finishes in Morocco, had set the early clubhouse target with their own rounds of 65 in the morning.

“I played well and I got my putter working today,” said the in-form Lipsky who was fifth in Morocco. “I hit it all right, not great, but I think I holed 150 feet of putts today so that always helps.”

Pulkkanen, who finished eighth in Morocco, birdied four of his last six holes to join the American.

“I started slowly with only two birdies in the front nine but five birdies on the back nine so it was great,” said Pulkkanen.

Wu Ashun and Jin Daxin led the home charge with a pair of 66s to lie just a shot adrift, in a tie for fourth alongside John Catlin.

Catlin was also trying not to get ahead of himself. “We have a long way to go - 54 more holes - so you’ve just got to keep going,” said the American.