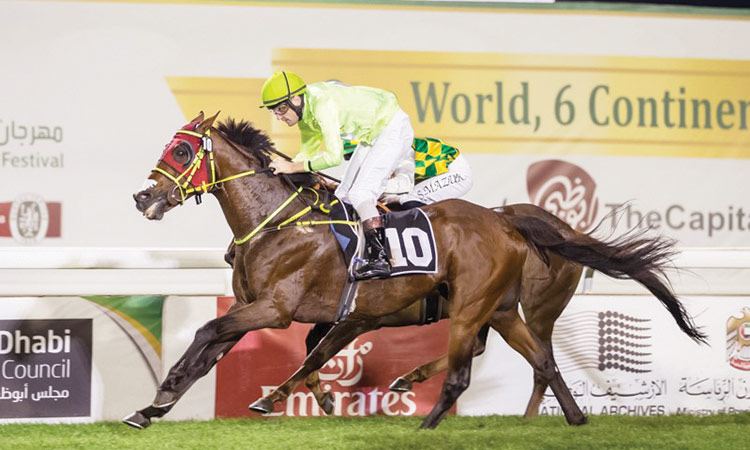 Probably last of the 12 runners at halfway, the 10-year-old entire just kept passing rivals throughout the duration of the straight under Gerald Avranche, sporting the lime green silks of Al Ajban Stables and riding for trainer Abdallah Al Hammadi, completing a double on the card for all concerned. It was a sixth career victory for the veteran, all at Abu Dhabi, but first since landing the 1600m Group 3 Sheikh Zayed bin Sultan Al Nahyan Cup in December 2016.

It was also the shortest trip over which he has won.

Of those who were competitive, Somoud looked the likely winner when hitting the front 650m out under Richard Mullen, but they were unable to repel a late challenge from Alhaan Al Reef.

A 4-year-old colt, trained by Hammadi for Al Ajban Stables where the handler is based, the winner was having his third career start and building on a promising third on the dirt at Al Ain, on his previous outing in the middle of December.

Slowly away, he was given time to find his stride by Avranche and they were able to tag onto a select group of runners with the majority beaten at halfway. Once in the straight, Avranche’s mount picked up well to hit the front 75 from home and the pair winning going away at the line.

The main support race, the 2400m Group 3 Arabian Triple Crown R3 for the 4-year-olds, produced a thriller with the lead constantly changing hands throughout the final 700m.

When and where it mattered, Hakeemat Muscat and Szczepan Mazur, denied on Wadeeaa in the feature, emerged on top with the 4-year-old filly powering home in the final 200m to snatch the spoils. Trained by Younis Al Kalbani for Muscat Stud For Pure Arabian Horses, who also bred the filly, she was winning for a third time, after two victories in her native Oman on the dirt surface at Muscat, but was making it third time lucky here in the UAE having finished runner-up in both the Listed Abu Dhabi Championship, over 1600m and the 2200m UAE Arabian Derby on her previous outings.

Originally third reserve, AF Nafece took full advantage of the late opportunity afforded to him to land the 1400m maiden for horses foaled in the UAE, providing owner Khalid Khalifa Al Nabooda and his main trainer, Ernst Oertel, yet another winner in what has been a prolific season.

Homebred by Al Nabooda, the 6-year-old gelding was opening his account after 13 previous fruitless starts having finished third on three occasions, his best previous placings.

Having tracked the early pace, he was sent to the front fully 700m out by Antonio Fresu.

The owner later completed a double in the 1600m handicap for horses in private ownership, also helping Mazur to complete a brace as he was aboard AF Momtaz who was doubling his own career tally having landed one of his previous ten starts for Musabbeh Al Mheiri.

As with the vast majority of the Al Nabooda string, also bred by the owner, the 6-year-old entire had previously won on his turf debut, after one previous Sharjah outing almost 12 months earlier, in November 2018 over this Abu Dhabi 1600m.

The very final race of the season in the capital, and only Thoroughbred contest on the card, was a 1600m handicap and Mazur completed a treble with victory aboard Sugar Boy, owned and trained by Qaiss Aboud. ing in the UAE for this season concludes next weekend with racing at Al Ain on Thursday and Meydan on Friday. 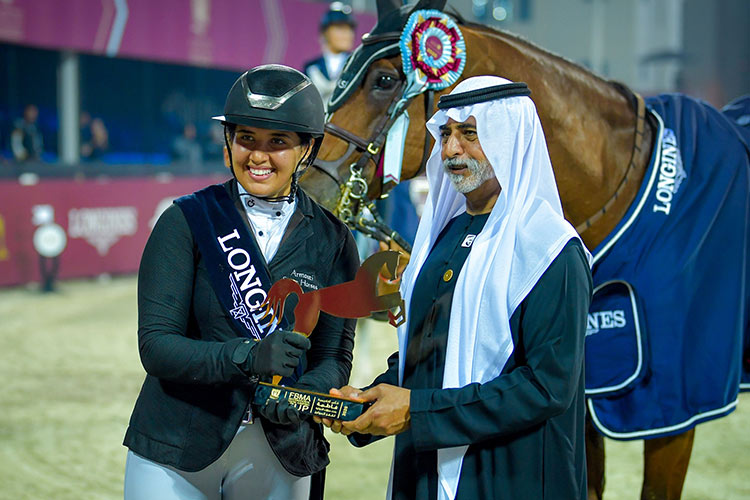