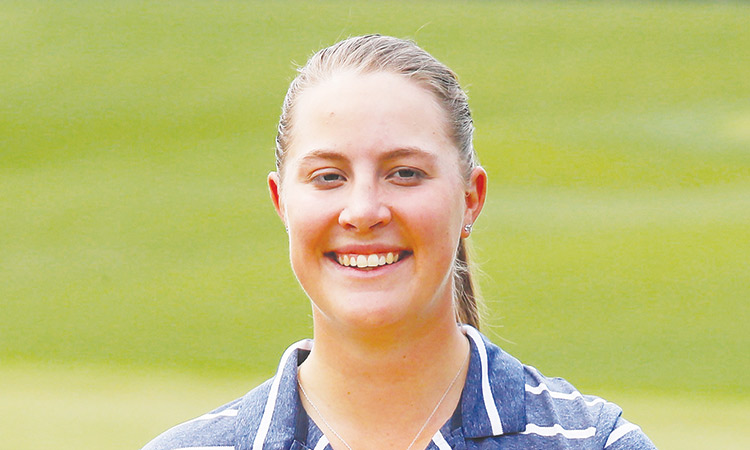 Jennifer Kupcho celebrates with the trophy after winning the Augusta National Women’s Amateur on Saturday. Reuters

Jennifer Kupcho struck a blow for gender equality and entered golf history books on Saturday when she was crowned Augusta National Women’s Amateur champion by firing a final-round five-under 67 for a four-shot win over Maria Fassi.

Following the first women’s competitive round played at Augusta National, it was a double celebration for Kupcho as she hoisted the silver and gold Tiffany-designed cup at a club that just seven years ago did not have a single woman member.

Kupcho, the No. 1 player in the women’s amateur ranking, finished at 10-under 206 and won a silver bowl as the trophy, along with a piece of crystal - another Masters tradition - for making the only eagle of the tournament.

Her elation was mixed with relief as she struggled with a migraine and blurred vision from the eighth through 11th holes that threatened to scuttle her title hopes.

Kupcho’s elation was mixed with relief as she struggled with a migraine and blurred vision from the eighth through 11th holes that threatened to scuttle her title hopes.

The Masters is often decided on the back nine on a Sunday and that was the case for the women who played their final round on Saturday, as Kupcho played the final six holes in five under.

Showing why she is the world’s top-ranked amateur, the 21-year-old carded birdies at 15, 16 and 18 along with a brilliant eagle on the par five 13th that wiped out Fassi’s two stroke lead.

Elsewhere, Ko Jin-young birdied five holes on the front nine to seize slim lead over two other South Koreans heading into the final round of the ANA Inspiration, the first major of the LPGA season.

The 23-year old from Seoul fired a four-under 68 to lead second round leader Kim In-kyung as the Korean juggernaut steamrolled its way to the top of the leaderboard at the Mission Hills Country Club course near Palm Springs, California. Four of the top seven players are Korean-born.

Ko’s round was far from perfect as she stumbled down the stretch with a double bogey and bogey on Nos. 14 and 15 respectively to reach a eight-under 208 total. Ko led by five strokes at one stage after sinking a long putt on the par-four 10th.

But her tee shot on 14 landed in the water and she dropped further with a bogey on the next hole which saw her lead cut to just one stroke.

Kim is in sole possession of second place and just one stroke back after shooting a one-over 73. She closed with a birdie on the last hole.

Meanwhile, South Korea’s Kim Si-woo will take a slender one-shot advantage into the final round of the Valero Texas Open after a birdie on the 18th hole left him within sight of a wire-to-wire victory on Saturday. Kim, who had started the day four shots clear, had gradually been reeled in by Canada’s Corey Conners as he struggled to adjust to steady rain and gusty winds at TPC San Antonio’s AT&T Oaks Course.