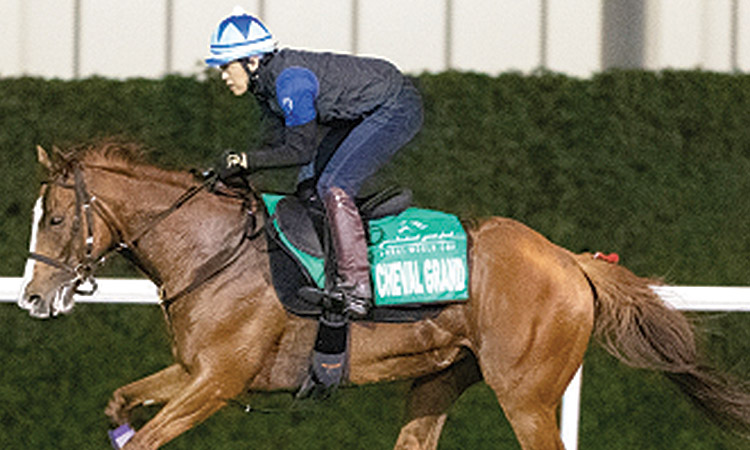 Cheval Grand being put through his paces on Friday morning.

DUBAI: Godolphin’s trainer Charlie Appleby is confident that Old Persian has continued to progress on the back of his victory in Super Saturday’s Group 2 Dubai City of Gold as the colt braces for Sheema Classic, presented by Longines.

The 4-year-old had a gentle spin around Appleby’s Marmoom dirt track and will be running on Saturday ahead of a European campaign when he takes in some of the best 2400m races.

“Three to four is a formative year for any horse and he has shown us on his only start this year what to expect, and what he needed to do to compete at the highest level as a 4-year-old,” Appleby said.

“I have been really happy with how he has gone since Super Saturday and the plan was to run here and then go back to Europe where hopefully he will be one of our flag-bearers for 2019.”

Meanwhile, Cheval Grand, the Japan Cup winner, will be making his first international start on Saturday at the Dubai Sheema Classic.

“Both of my horses are in good condition now,” trainer Yasuo Tomomichi said.

“No problems. The half brother and sister team of Cheval Grand and Vivlos are really clever horses,” owner Kazuhiro Sasaki said with pride.

“Cheval’s trainer has told me that he is in good shape and feels relaxed. He has got a lucky inside draw, so my hopes are high. Future plans have not been decided yet. We will make those decisions after this race.”

All the while, Newmarket-trained Desert Encounter continued his preparation. Dodging the rain showers, he completed a circuit of the Meydan dirt track under regular work rider Katie Reed shortly after

7:00 am as he went around at a steady canter that delighted trainer David Simcock.

Three previous mornings had been occupied with one and two laps of the dirt circuit and a very early spin over the turf course, but Simcock stressed that no great significance should be attached to the variety of the 7-year-old’s work schedule.

“Different distances and a change of pace are exactly the same as we would do at home, no more and no less,” Simcock said. “He’s an old boy now and a bit of a character, so it all helps.”

Another Japanese contender Rey de Oro went out early this morning onto the turf course to stretch his legs after his breeze yesterday.

“He has maintained his condition well and has relaxed better than last year,” said work rider and assistant trainer Daisuke Tsumagari.

“The track was a little heavy this morning due to all the train. After talking to the trainer, we will probably take him out on the dirt instead tomorrow.”

Suave Richard cantered a half a lap around the Meydan dirt track this morning before schooling in the gate.

“He has maintained his condition well and was moving nicely this morning,” said his trainer Yasushi Shono.

“He relaxed well in the gate too, so I don’t think there will be any problem there either. Tomorrow, Joao Moreira will be onboard to get a feel for him before the race. Which surface depends on the weather though.”

Meanwhile, British import Nine Below Zero, who won the Al Naboodah Handicap in January and went down by just a neck on his latest start behind Drafted, will launch his bid for Golden Shaheen.

“He is a gutsy little fellow and I think he’ll run his heart out again,” said trainer Fawzi Nass. “Roy H coming out is obviously a help and it also gets us one closer to the inside as well.”

Trainer Peter Miller happily reported that champion Sprinter Roy H, whom he had to withdraw from the Dubai Golden Shaheen on Thursday because of an abscess in the gelding’s left front foot, was much improved by Friday morning and now will be well enough to board the scheduled flight home to the USA with the rest of the California-based contingent of horses next week.