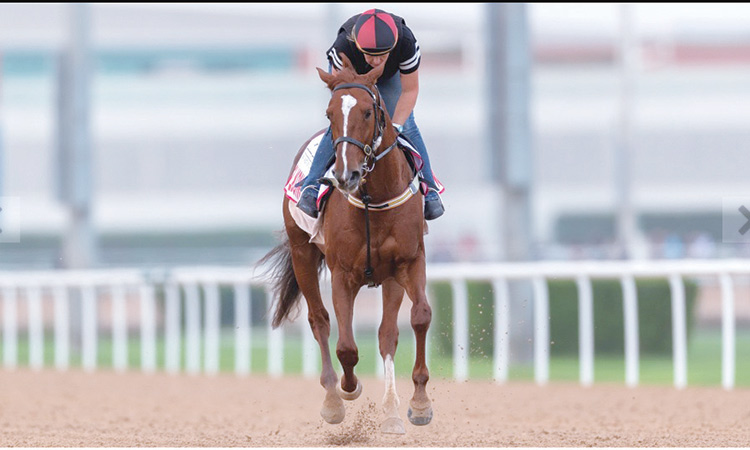 South Korea’s Dolkong is another top contender for the World Cup glory.

DUBAI: Already the only horse to have won both the UAE Derby and Dubai World Cup sponsored by Emirates Airline, Godolphin’s Thunder Snow will bid to become the first dual winner of the latter again this Saturday with the world’s most valuable horse race’s prize-money elevated from US $10million last year to $12milllion this.

Trained by Saeed Bin Suroor, seeking to add to his record eight Dubai World Cup victories, the 5-year-old entire son of Helmet has been a star for connections and, as well as his UAE feats, is also a dual Group 1 winner on turf in Europe,

Having won his juvenile debut at Leicester in May 2016, it took him five more efforts to record a second victory, landing the Group 1 Criterium International in the October of that year on the first time he was partnered by Christophe Soumillon, who has been in the saddle for every subsequent outing bar one, when he was suspended on Super Saturday 2018.

He was then campaigned in Dubai and the 2017 Dubai World Cup Carnival, he and Soumillon easily winning the 1600m Group 3 UAE 2000 Guineas before, on Dubai World Cup night, registering a narrow success in the 1900m Group 2 UAE Derby,

Sent to Churchill Downs seeking to provide his owners and trainer a first Kentucky Derby success, he was pulled up shortly after the start having ‘bucked and kicked’ throughout the early stages of the race.

Back in Europe and on turf, he was runner-up in the Irish 2000 Guineas and third at Royal Ascot in the Group 1 St James’s Palace Stakes before doubling his tally at the highest level when victorious, again in France but at Chantilly, in the Prix Jean Prat.

Three weeks later, over the same 2000m, he and Soumillon achieved their, to date, crowning glory with a smooth success in the Dubai World Cup before three more 2018 outings which culminated with a close third in the Grade 1 Breeders’ Cup Classic in November.

He was then given a deserved break until Super Saturday three weeks ago when again second but after Bin Suroor had forewarned everyone his stale star would need the outing.

“The plan after the Breeders’ Cup was always to freshen him up after a busy year and wait for Super Saturday,” Suroor said.

“We were very pleased with that comeback run because he very much needed it and has certainly improved a lot for it.

“He did his final serious piece of work on Saturday and we were delighted with him so we are looking forward very much to Saturday.

“He won the UAE Derby on World Cup night two years ago and the World Cup itself 12 months so we very much hope he can make it three consecutive years.

“Obviously it is a tough race and we have not seen the draw yet but he proved last year he could over come a wide gate so we are not too worried about that.”

Soumillon added: “He performed pretty much as we expected on Super Saturday when we knew he was going to need the run so, in the circumstances, he ran well for a long way. The three weeks since should have put him spot on and the team are very happy with him.”

“What we can control has gone as well as we could have hoped,” said trainer Simon Foster. “It’s not ideal by any means that he drew widest of 13 in the Dubai World Cup, but that’s the way it goes. He was never going to be up on the pace, but it does make the task harder, no doubt.”

Connections of Seeking the Soul thought so highly of the regally-bred colt that they threw him straight into the deep end when they entered him in the 2016 Belmont Stakes off a maiden victory.

He would finish 12th that day behind Creator, but did show a glimpse of belonging in the major races when he won the 2017 Grade 1 Clark Handicap, 17 months later. On Saturday, he could claim the spot as the leading handicap horse in the world with a break through win in $12 million Dubai World Cup sponsored by Emirates Airline.