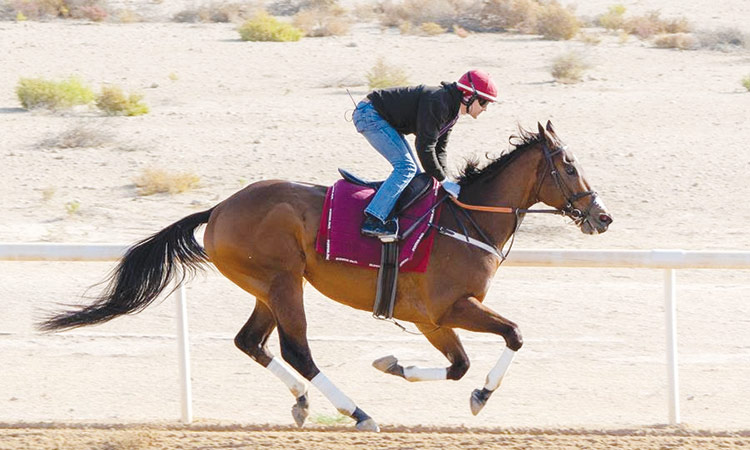 Thunder Snow and North America have been drawn to Gates 12 and 3 respectively for the World Cup.

Dubai: Thunder Snow will again have to overcome a wide draw if he is to successfully defend his crown Dubai World Cup at Meydan on Saturday.

Thunder Snow tries to become the first two-time winner of the $12 million race contested at 2,000 meters (about 1 1/4 miles) on the dirt.

He will be expected to strip fitter for his comeback run when second in round three of the Al Maktoum Challenge and bids to become the first horse in history to win the Dubai World Cup more than once.

Christophe Soumillon’s mount does not appear ideally placed after drawing stall 12 of 13 — but he was widest of all in gate 10 last year.

“He’s always tough and no horse has won this race twice,” said Suroor.

“It would be good to see him win for the second year. He’s always tried. We’ve seen him in America, seen him in Europe and Dubai.

“It is not easy, that’s the truth. Last year Christophe (Soumillon) gave him a good ride, pushed him all the way to be close to the rail. I hope this can happen again this year,” said Suroor. “The horse has come back well from his last race and has worked well.”

Other leading fancies Capezzano and North America will break from stalls two and three respectively.

Ramzan Kadyrov’s North America will try to make amends. Last year a slow start in the Dubai World Cup cost the front-running North America any chance as he finished 10th, and one year later trainer Satish Seemar is still second-guessing himself about that race.

“What happened last year will never leave me for the rest of my life,” Seemar said. “I’ll always blame myself. I should have had a person in the gate holding him. I should have known about the sound.”

Five United States-trained horses will take their best shot on Saturday, including Charles Fipke homebred Seeking the Soul, who enters off a runner-up finish to City of Light in the Pegasus World Cup Invitational Stakes (G1) Jan.26 at Gulfstream Park. He also posted a runner-up finish to that same rival in the 2018 Breeders’ Cup Dirt Mile (G1).

“He was second in the Breeders’ Cup and second in the Pegasus, so he has the credentials to be here. I think he has a heck of the shot.”

Trainer Todd Pletcher is hoping for a turnaround in form from China Horse Club, Head of Plains Partners, Starlight Racing, and WinStar Farm’s Audible, winner of the 2018 Xpressbet Florida Derby (G1). This season Audible finished off the board in the Pegasus and second in the Harlan’s Holiday Stakes (G3) at Gulfstream but both of those efforts were on off tracks.

“The one thing we felt like after evaluating the Harlan’s Holiday and the Pegasus, talking to the riders, both Javier (Castellano) and Flavien (Prat), they felt like he tolerated the sloppy conditions, but didn’t really enjoy them,” Pletcher said. “So I think that compromised his finish a little bit in both races. The track on Pegasus day definitely was a track where you wanted to be inside if you could. From his post, he was never really able to work himself inside. I thought, despite that, he tried hard and ran a credible race.”

The Charlie Appleby-trained Old Persian is the likely favourite for the Dubai Sheema Classic under William Buick — and has drawn stall two.

Almond Eye is very much the star attraction in the DP World-sponsored Dubai Turf and is drawn in the middle in stall seven.

Sakae Kunieda’s four-year-old is unbeaten in five starts including top-level triumphs in the Japanese 1000 Guineas, the Japanese Oaks and the Shuka Sho, before beating the boys in November’s Japan Cup.