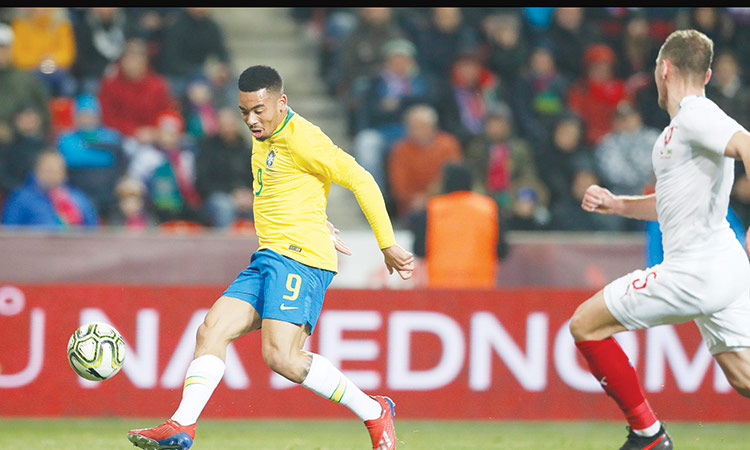 Prague: Substitute Gabriel Jesus scored twice in the closing minutes to help Brazil come from behind to beat the Czech Republic 3-1 in a friendly in Prague on Tuesday.

The Manchester City striker first slammed home a cross from David Neres who had sprinted down the left flank following a superb pass from Danilo on 83 minutes.

And then in the 90th minute, Jesus scored on a rebound of his own shot after a series of clinical passes inside the Czech box. The Czechs took the lead in the 37th minute when midfielder David Pavelka found himself in possession behind a leaky Brazil defence and slammed the ball in past Alisson.

Roberto Firmino equalised four minutes after half-time, picking up a pass aimed at Czech sweeper Marek Suchy inside the box and firing home.

The Selecao dominated the opening minutes, but the Czechs soon levelled the game.

Czech striker Patrick Schick had the first shot on goal of the game, forcing a diving save from Alisson at his right post with a low left-footed free kick deflected by the wall.

The Czechs kept trying their luck from long range, but Vladimir Darida fired past the post and Filip Novak saw his attempt stopped by Alisson.

Brazil had a lone shot on goal in the first-half but Czech keeper Jiri Pavlenka had little trouble parrying away Casemiro’s free kick.

In the second period, Philippe Coutinho saw his low shot cleared by a diving Pavlenka while substitute Neres fired into the Bremen keeper from close range. Both teams entered the game with mixed feelings.

The Czechs were digesting a 5-0 loss to England in a Euro 2020 qualifier at Wembley on Saturday, their worst defeat in memory. And Brazil, preparing to host this year’s Copa America which starts on June 14, were held to a 1-1 draw by Panama in a friendly in Porto on the same day.

Elsewhere, Mexico made it two wins in two matches under coach Gerardo “Tata” Martino Tuesday with a 4-2 victory over Paraguay in a friendly international at Levi’s Stadium.

Jonathan dos Santos’ long wait for a first international goal ended as he opened the scoring in the sixth minute of his 40th appearance for Mexico.

A Gustavo Gomez own goal in the ninth and Javier Hernandez’s strike in the 24th extended Mexico’s lead, and Luis Montes added a fourth in injury time -- after Paraguay had second-half goals from Hernan Perez and Derlis Gonzalez.

The victory followed a 3-1 win over South American champions Chile in a friendly last week -- an encouraging start for Argentina’s Martino, who was presented as manager in January saying he was taking on the quest to end Mexico’s “quarter-finals curse” that has dogged the team for the past seven World Cups and will do all he can to steer them to the long-sought fifth match in Qatar in 2022.