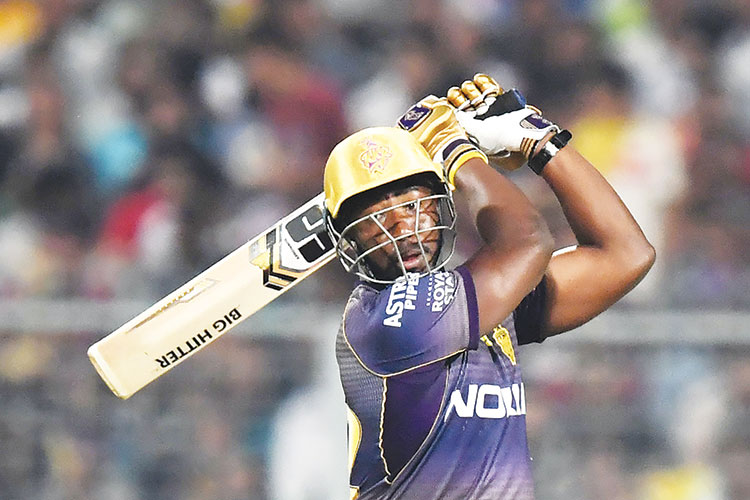 Russell (4x4, 4x6) came in to bat with KKR needing 68 off 27 balls. It chasing 182 for victory in the 16th over just after a set Nitish Rana (68) was removed by Rashid Khan. Rana was sent to open the innings as Sunil Narine faced fitness issues.

The T20 specialist then took Siddharth Kaul for 19 runs in the 18th over, followed by 21 off Sunrisers stand-in skipper Bhuvneshwar Kumar, to bring the equation down to 13 off the last over.

Shubman Gill (18 not out) –– who joined hands with Russell for a 65-run fifth wicket stand –– then hit two sixes off Shakib Al Hasan to complete a remarkable chase for the home team with two balls to spare. KKR finished with 183/4 in 19.4 overs.

Earlier, Warner, returning from a one-year ban in the IPL, cracked 85 off 53 deliveries while India all-rounder Vijay Shankar played a useful unbeaten cameo (40) to help the visitors post 181/3.

Robin Uthappa and Rana then stitched together 80-run stand off 58 deliveries for the second wicket to keep KKR’s chances alive before Uthappa, dropped on 20 by Yusuf Pathan, departed with his off-stump flattened by Siddharth Kaul.

Skipper Dinesh Karthik (2) did not last long chipping a slower one from Sandeep Sharma straight to his counterpart Bhuvneshwar Kumar at cover.

In came the big-hitting Andre Russell with KKR still needing 87 off 44 as the brilliant Rana brought up his sixth IPL 50 by picking a single of Sandeep in the 13th over.

Rana seemed unstoppable as the former Mumbai Indians batsman smashed Sandeep for a six and in the next over reverse-swept Rashid Khan for a four before a tower at the high court end lost some lights and play was stopped for 12 minutes.

The break cost KKR dear as the momentum broke with Rashid removing Rana plumb in front.

In the first innings, it was all about Warner’s dream return as the 32-year-old took the KKR bowlers to the cleaners, not even sparing the generally economical Sunil Narine and Kuldeep Yadav.

Warner, whose 53-ball 85 was laced with nine fours and three sixes, looked in the zone from the word go and brought up his 37th IPL 50 off just 31 balls with an upper cut over third man off Andre Russell in the ninth over.

Warner now has the most 50-plus scores (40) in the IPL history, ahead of Virat Kohli (38). The Aussie also has three tons to his name.

The dashing southpaw looked good for a fourth hundred, but Russell came back to get his wicket and help the hosts put a lid on the visitors’ run feast.

But Shankar ensured that Sunrisers had enough runs on the board with an unbeaten 40 with Manish Pandey not out on 8, while Yusuf Pathan (1) failed to get going.

For the hosts, Russell was the pick of the bowlers with figures of 2/32. Playing first time since being banned for one-year for role in a ball-tampering row in South Africa last year, Warner opened his account by flicking Prasidh Krishna towards the deep square leg boundary.

In the next over, the 32-year-old hit Piyush Chawla for two fours –– first a cut through extra cover off the back foot and then a delightful cover drive –– to underline his intent.

In the other match of the IPl, Delhi Capitals defeated Mumbai Indians by 37 runs.