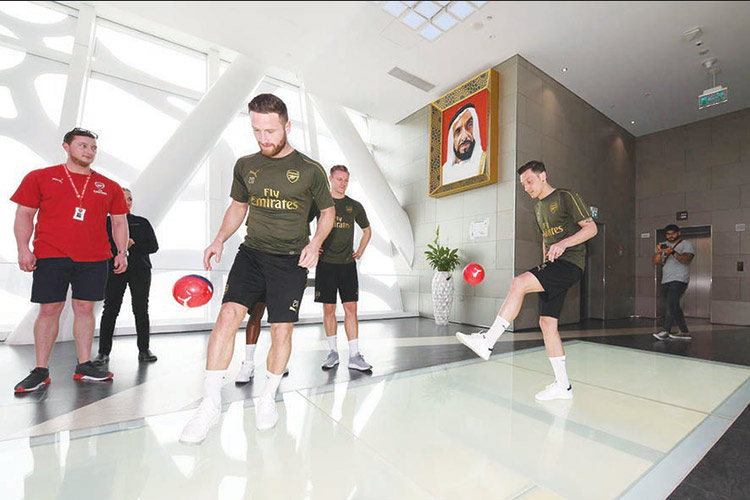 Arsenal players show off their fancy footwork to the delight and amazement of visitors at the Dubai Frame. Supplied photo

Dubai: Arsenal players Mesut Ozil, Bernd Leno, Ainsley Maitland-Niles and Shkodran Mustafi were treated to a tour of Dubai, visiting the city’s latest attractions and legendary landmarks, and taking in the striking architecture and impressive skyline.

The players were picked up on a hop on hop off City Sightseeing bus, making their first stop at the Dubai Frame. The players toured the spectacular structure, which boasts panoramic views of both old and new Dubai at 150 metres high.

The players stepped onto the glass bridge in the transparent viewing deck, and even showed off their fancy footwork to the delight and amazement of the other visitors at the Dubai Frame. Dubai’s latest architectural landmark is a giant rectangular frame situated in a unique location that offers views via its 93 metre bridge observatory.  The players then continued to Burj Khalifa, and also passed the Dubai Canal during their sightseeing tour.

Arsenal is set to play a friendly match with Al Nasr Sports Club at Al Maktoum Stadium on March 26.

The players are also taking part in warm weather training sessions, to prepare for the final weeks of the 2018-19 football season. Last week, the players arrived on a specially-branded Emirates A380 Arsenal aircraft, and the airline is supporting the visit by connecting football enthusiasts in the UAE with one of the game’s most iconic clubs.