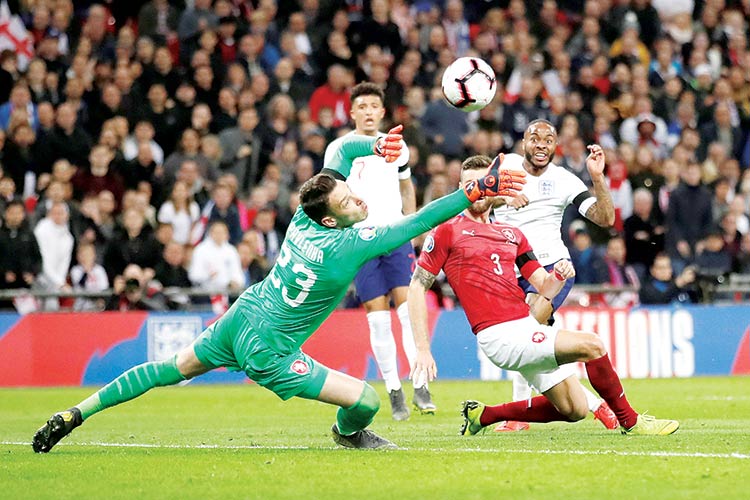 England’s Raheem Sterling scores against the Czech Republic during their Euro 2020 qualifier on Friday. Reuters

Paris: Raheem Sterling showed that he is coming of age on the international stage as his hat-trick saw England start their Euro 2020 qualifying campaign by hammering the Czech Republic 5-0, while Antoine Griezmann inspired France to a battering of Moldova.

Manchester City attacker Sterling had scored just two goals in his first 45 caps, but he now has five in his last three international appearances following Friday’s treble, which helped England storm to the top of Group A ahead of Monday’s trip to Montenegro, who drew 1-1 at Bulgaria.

Sterling opened the scoring in the 24th minute when he tapped home Jadon Sancho’s cross, and struck twice more in the second half to put the result beyond doubt after Harry Kane fired home his 21st England goal from the penalty spot.

“It was a beautiful team performance and I was happy to help the team get the win,” Sterling said.

Sterling has 24 goals for club and country this term and his impressive form is a fry cry from the dark days when he was vilified as England crashed out of Euro 2016.

“I’m just being confident in myself, I’m trying to get in areas and take shots, not to worry about anything,” he added.

England carried the momentum from a run to the World Cup semi-finals and qualification for the last four of the Nations League into the Euro qualifiers and blooded young hopeful Sancho, who impressed on his full England debut.

The 18-year-old who has shone in the Bundesliga for Borussia Dortmund, gave England fans further cause for excitement, with his potential adding to that of Sterling and Kane coming into their prime.

“I thought Raheem was electric. He has looked like that all week in training. I’m pleased for him, it is a special night for him,” coach Gareth Southgate said.

“I think he’s really matured as a person and a footballer. He’s hungry for goals and hitting things instinctively without thinking too much.”

Meanwhile, winger Antoine Griezmann scored one and set up another as World Cup winners France easily beat Moldova 4-1 in Chisinau in their opening Euro 2020 qualifier on Friday.

The Atletico Madrid attacker opened the scoring in the 24th minute of the Group H encounter before crossing for Raphael Varane to double the scores three minutes later.

Olivier Giroud equalled David Trezeguet as Les Bleus’ third highest scorer of all time with his 34th international goal nine minutes before the break and Kylian Mbappe completed the rout with three minutes left, before Vladimir Ambros claimed a late consolation for Moldova.

Left-back Layvin Kurzawa was the only member of the starting lineup without a World Cup medal as Bayern Munich winger Kingsley Coman pulled out during the warm up with a muscle issue and was replaced by Blaise Matuidi.

“We played a very consummate first half in terms of control and attacking organisation. The second half was less fulfilling due to substitutions,” said coach Didier Deschamps.

“We’ve opened our campaign well and the second game comes around quickly. In three days we have do it again,” Deschamps added ahead of facing Iceland on Monday.

Griezmann had the best of the early chances but his effort from far out failed to threaten Alexei Koselev in the home side’s goal after 17 minutes.

The shaggy-haired wide-man scored his 27th goal for France seven minutes later, Manchester United playmaker Paul Pogba picking Griezmann out inside the box with a perfectly timed chip before he hit a lob first time to beat a flat-footed Koselev.

Griezmann then turned provider, his corner finding centre-back Raphael Varane, who headed to double the visitors’ advantage at the Zimbru Stadium.

Giroud missed an opportunity to move ahead of Trezeguet’s record 34 goals shortly after the break, when his header from a Griezmann cross flew past the post.

Pogba could have added a second assist to Griezmann’s account but his header was parried away superbly by Koselev on 70 minutes, and the Manchester United man went close again with 11 minutes left when his shot could only find the side-netting.

The hosts claimed a consolation goal with 90 seconds of normal time remaining when midfielder Ambros capitalised on a rebound off the post to fire past Hugo Lloris.

Next up for France is Iceland, while as Moldova, who are yet to qualify for an international tournament, head to Turkey.