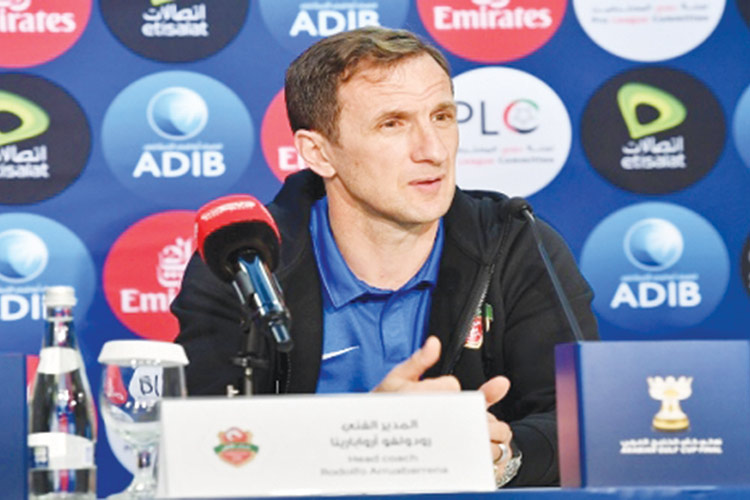 Speaking in the pre-match press conference held at the match venue at Hazza Bin Zayed Stadium, the Argentine said he believes there is little to separate the two sides, and the result will be anybody’s guess.

Arruabarrena called on his team to pay extra attention to the small details which play a crucial role in such encounters.

The former Al Wasl boss alluded to his opponent’s record in final matches in recent years, warning, “Al Wahda are big team; they are used to playing finals and have a top-class coach and good players throughout their squad. They are having a great season, especially in this competition where they didn’t lose a single match.”

In turn, youngster Eisa Obaid, who accompanied Arruabarrena in the press conference, expressed his delight to be involved in the first final of his professional career, hoping that it would be marked with the title.

“We prepared well for this showpiece,” said Obaid. “I expect a difficult match between these two big teams. From our side, we will do our best to win the match and win the title for our fans.”

The route of each team to the final was very different. The Clarets advanced easily from the group stage and the knock-out stage, while Shabab Al Ahli struggled on their way to the final.

Both teams were drawn in Group A and clashed in the first round of the group stage in a game that ended in a 1-0 win for Al Wahda, thanks Leonardo da Souza’s winner.

Al Wahda maintained their positive performances as they defeated Al Wasl 3-0, beat Ajman 1-0 and overpowered Dibba 2-0. Their perfect start to the competition saw them collect 12 points in the first four matchweeks to seal an early spot in the quarter-final.

They were, however, held to a goalless draw with Bani Yas, before beating Ittihad Kalba 2-0 in their final group stage game.

They finished the group stage as Group A winners with 16 points, while scoring nine goals and keeping a clean sheet in all their games.

On the other hand, Shabab Al Ahli’s performances fluctuated throughout the group stage. They lost their opener to Al Wahda before beating Al Wasl and Ajman. They then suffered a defeat to Dibba to collect six points only from their first four games.

Shabab Al Ahli returned to winning ways with a 2-1 victory over Bani Yas then drew 0-0 with Ittihad Kalba. By the end of the group stage, Shabab Al Ahli had collected 10 points, scored six goals and conceded four.

Al Wahda continued their impressive performances in the knock-out stage. They clashed with Emirates Club, who finished fourth in Group B, in the quarter-final and earned an easy 5-0 win to advance to the semis.

Meanwhile, Shabab Al Ahli had a tougher test as they were pitted against Al Jazira, who finished third in Group B. Shabab Al Ahli netted two goals deep in injury time to earn a 4-2 win and seal their spot in the semi-final.

The Clarets conceded their first goal in the competition against Bani Yas in the semi-final, but were able to emerge 4-1 victorious to reach the final.

On the other hand, Shabab Al Ahli struggled against Al Nasr as the game ended in a 0-0 draw, forcing the match into extra time, which saw each side score a goal. The game came down to a penalty shoot-out which saw Shabab Al Ahli win to reach the final.