High-flying Juventus crash back to earth with Genoa defeat - GulfToday

High-flying Juventus crash back to earth with Genoa defeat 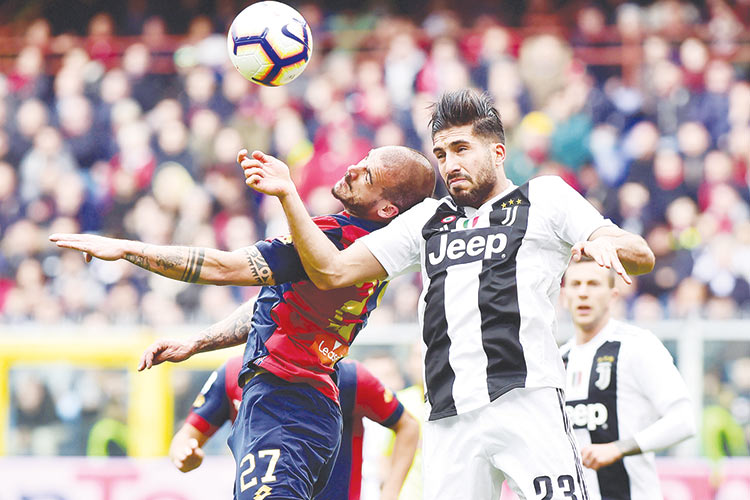 Genoa’s Stefano Sturaro (left) in action with Juventus’ Emre Can during their Italian League match on Sunday. Reuters

Milan: Former Juventus midfielder Stefano Sturaro scored in his first match for Genoa, a 2-0 victory which ended the title-holders unbeaten run in Serie A on Sunday days after their Champions League heroics.

Cristiano Ronaldo was rested after his hat-trick had fired Juventus into the European semi-finals with a comeback victory over Atletico Madrid.

But Massimiliano Allegri conceded that the win in Turin had taken its toll even if his side still remain 18 points clear on the top of the table before Napoli’s game against Udinese later on Sunday.

“It’s not a tragedy, but I’m sorry because we wanted to remain unbeaten,” said Allegri.

It was the first league defeat on Allegri’s side since April 2018 against Napoli, and first away to Sampdoria since November 2017.

The Italian champions had already been beaten this season by Atalanta in the Coppa Italia and lost in the Champions League to Young Boys in the group stage and Atletico Madrid in the last-16 first-leg.

Italian international Sturaro, 26, was playing his first game after ten months out with a tendon injury, and scored just two minutes after coming off the bench. Another substitute Goran Pandev sealed victory with ten minutes to go.

The last goal Sturaro had scored was for Juventus in the Champions League, a 2-2 comeback against Pep Guardiola’s Bayern Munich in February 2016.