Raonic, Thiem to clash in semis; Bencic, Kerber face off for spot in final - GulfToday

Raonic, Thiem to clash in semis; Bencic, Kerber face off for spot in final 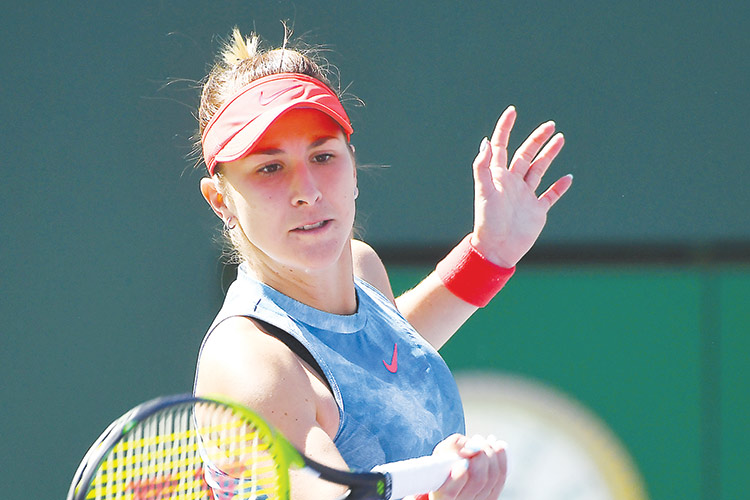 Belinda Bencic in action against Karolina Pliskova (not in frame) during their quarter-final match at Indian Wells on Thursday. Reuters

France’s Monfils, ranked 19th in the world, pulled out shortly before his scheduled quarter-final against Thiem with left Achilles tendon trouble.

Oft-injured Monfils said he’d felt discomfort in his ankle for a couple of days and had been receiving treatment, but the pain was worse after his fourth-round win over Philipp Kohlschreiber on Wednesday night.

“I tried a little jog this morning, and I couldn’t really actually push on it,” he said.

“Then we taped it. Then I hit a little bit tonight, and I felt that I cannot be 100 percent. I have this pain, and it wasn’t the right choice to play.” He said an ultrasound exam confirmed severe inflammation, and he wasn’t yet sure if it would prevent him from playing the upcoming Miami Masters.

“Very disappointing, to be honest,” said Monfils, who was enjoying a 15-3 start to the season. “Because I was playing great tennis, feeling strong.”

Thiem is through to the semi-finals at Indian Wells for the first time, having reached the quarters once before in 2017.

“I was really surprised,” Thiem said, who was waiting to be taken to the court when he realized there was a problem.”

Thiem has lost both of his prior matches against Raonic, who ended the dream run of lucky loser Miomir Kecmanovic, beating the 19-year-old Serbian 6-3, 6-4.

Raonic, ranked 14th in the world, fired 13 aces and broke Kecmanovic once in each set to keep his bid to better his 2016 runner-up finish on track.

Kecmanovic, who failed to make it through qualifying but gained entry to the main draw when fifth-seeded Kevin Anderson withdrew, was the first lucky loser to reach the quarter-finals at Indian Wells since the tournament served as the inaugural ATP Masters 1000 in 1990.

Raonic’s serve wasn’t at it’s booming best. He put only 55 percent of his first serves in play.

“I think that can get better,” Raonic said.

Bencic showed no sign of a let-down after her fourth-round victory over world number one and defending champion Naomi Osaka, out-lasted Czech Pliskova 6-3, 4-6, 6-3.

She stretched her WTA match winning streak to 12 -- six of those wins coming against top-10 players with No. 8 Kerber coming up.

“Of course I’m very confident,” said Bencic, who rose to 23 in the world with her first WTA title in four years at Dubai last month and will crack the top 10 by virtue of reaching the semis here.

Reigning Wimbledon champion Kerber meanwhile reached the Indian Wells semi-finals for the third time with her win over Williams in a battle of former world number ones.

Kerber dominated the tiebreaker to grab a hard-fought first set that featured four breaks of serve.

She had to fight for the lone break of the second set as Williams saved four break points to hold for 2-2 and saved four more in the sixth game before Kerber finally converted one for a 4-2 lead that would stand up the rest of the way.

Williams never got her big serve going, producing just one ace. The 38-year-old veteran did her best to catch Kerber out with crafty changes of pace, but the German was able to adjust.