Hamilton on top as Ferrari struggle in season’s first exchanges 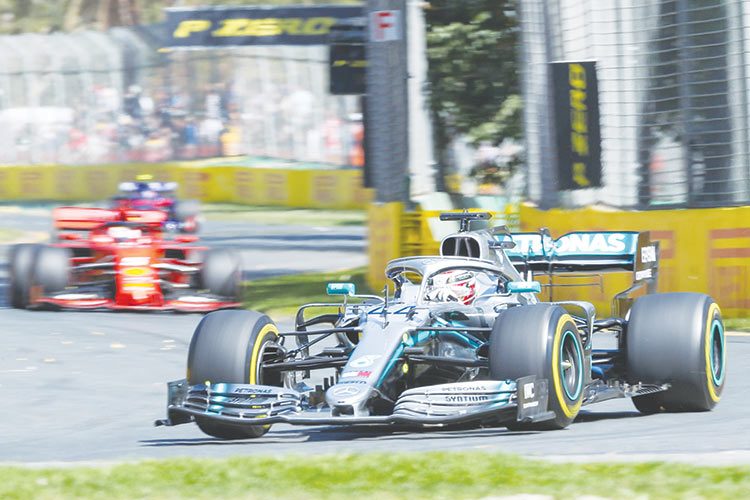 Mercedes’ Lewis Hamilton drives during the first Formula One practice session in Melbourne on Friday, ahead of the Formula One Australian Grand Prix. Agence France-Presse

Melbourne: Lewis Hamilton made a mockery of his claim that Ferrari would be half-a-second quicker at the Australian Grand Prix by easily clocking the fastest times in the season’s opening practice runs Friday.

The Briton led a Mercedes one-two in the second session as he powered round Melbourne’s Albert Park circuit under clear skies with a best of one minute 22.600 seconds.

It bettered his pace-setting 1:23.599 in the opening practice as he kick-started his bid for a sixth world title.

Valtteri Bottas was second (1:22.648) with Red Bull’s Max Verstappen third (1:23.400), marginally ahead of impressive new teammate Pierre Gasly, who was promoted this year from Toro Rosso.

Sebastian Vettel, who has won in Melbourne for the past two years, could only manage fifth, nearly a second adrift of arch-rival Hamilton, while Ferrari partner Charles Leclerc struggled to ninth, straddling the kerb and spinning as he pushed hard late in the day.

The Renaults of Nico Hulkenberg and Daniel Ricciardo were sixth and seventh respectively.

“I have a positive buzz from driving the car today -- this is what I love doing. The car feels like it’s in a similar place to where it was in Barcelona, which is positive coming to a different track,” said Hamilton.

“We got through our programme really well, there were no issues on track. There’s plenty of stuff that we can improve on, but this was not a bad start.”

Hamilton is gunning for a third world crown in a row to close in on Michael Schumacher’s all-time record of seven.

Much had been made of his insistence after pre-season testing in Barcelona that Ferrari were much faster, but he quickly put that fallacy to bed as he angles for an 84th pole position.

Bottas said the car felt better than during testing.

“We didn’t bring a lot of new parts to the car, but we were able to optimise the package that we have,” he said.

“We have an idea of how much we can improve for qualifying, but we have no idea how much performance the other teams can still bring.”

There was some speculation in the paddock that Ferrari may have been sandbagging, or deliberately holding back ahead of qualifying on Saturday.

Vettel slid onto the grass at turn one early in the afternoon run.

“Check the car in turns one and four. Feels quite odd... Seems to be something wrong. Box,” he said on the team radio. He recovered but later told the team his car was “still a bit wobbly”.

The German said afterwards it had been “a tricky day”.

“I think for us we are not yet where we would like to be, not in terms of lap times but in terms of car feel and handling,” he added.

“We didn’t really get into the groove and the rhythm and I hope tomorrow is a better day.”

Toro Rosso new boy Alexander Albon had a troubled introduction to Formula One, losing his front wing in a crash at turn two in the first practice. He slid onto the gravel again in session two and skidded onto the grass.

It was also a frustrating day for Poland’s Robert Kubica, in his first Formula One drive since his right arm was partially severed in a horror rallying accident eight years ago.

His best time of 1:26.655 for Williams was slowest on a day marred by the sudden death on Thursday of long-serving and well-respected Formula One race director Charlie Whiting.