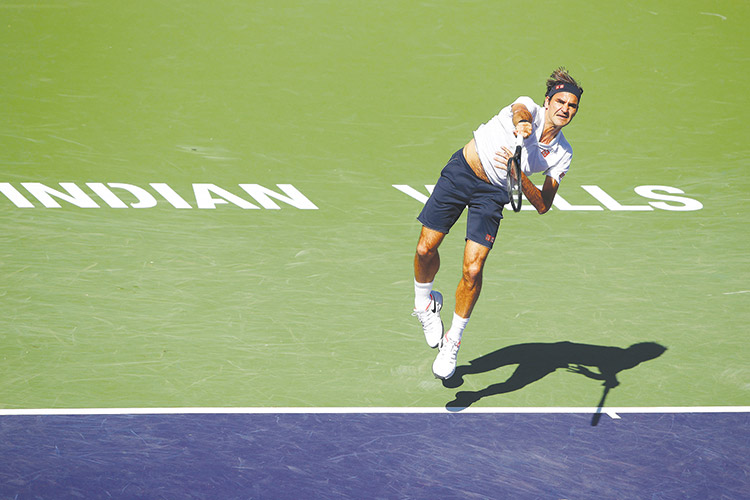 Federer, seeking a record sixth title in the California desert, needed just 64 minutes to get past Britain’s Kyle Edmund 6-1, 6-4.

Nadal said his performance on a windy stadium court wasn’t as good as his 6-3, 6-1 third-round win over Argentine Diego Schwartzman.

But he was more than a match for 113th-ranked Krajinovic, breaking him early in each set and saving the only break point he faced.

Nadal, who lifted the Indian Wells trophy in 2007, 2008 and 2013, is in the last eight for the first time in three years after missing last year’s edition, skipping both Indian Wells and the Miami Masters with a hip injury.

Khachanov produced just one ace to the big-serving American’s 12 but stretched his record over Isner to 4-0. Fourth-seeded Federer, fresh off his 100th career title, looked poised to finish off Edmund in less than an hour.

But the Swiss great had to fight off three break points as he served for the match, just a small speed bump in a match that he took charge of early.

“He didn’t have the best start, so that cost him the first set,” Federer said.

“Second set, it was definitely better. I think he probably struggled throughout a little bit. He never really got going. “Conditions are tough with the glare, and the jump of the ball it’s sometimes hard to find the rhythm and timing.”

Federer will fight for a semi-final berth against 22-year-old Pole Hubert Hurkacz.

Hurkacz, ranked 67th in the world, sent 25th-ranked Canadian Denis Shapovalov packing 7-6 (7/3), 2-6, 6-3. Although he’ll be an overwhelming favorite against Hurkacz, Federer said he wouldn’t take a semi-final meeting with Nadal for granted.

“I hope I can get there,” Federer said, “but I’m not going to underestimate Hubert.”

A day after world number one Novak Djokovic tumbled out of the third round, 19-year-old Miomir Kecmanovic kept the Serbian flag flying.

Kecmanovic became the first lucky loser to reach the last eight at Indian Wells since the ATP’s Masters 1000 series launched in 1990.

Kecmanovic, ranked 130th in the world, had taken the first set against Yoshihito Nishioka 6-4 when the 74th-ranked Japanese retired because of injury.

Kecmanovic, who gained entry to the second round when fifth-seeded Kevin Anderson withdrew with an elbow injury, is in his first ATP quarter-final.

Kecmanovic is the last teen left in the men’s draw, after the departure of 19-year-old Shapovalov.

At the other end of the age spectrum, 40-year-old Croatian Ivo Karlovic’s run came to an end with a 6-4, 6-3 loss to 25-year-old seventh seed Dominic Thiem.

Thiem needed less than an hour to subdue the 89th-ranked Karlovic, surrendering just seven points on his own serve and punishing Karlovic’s second serve. Thiem said putting 87 percent of his first serves in play was key in his first meeting with Karlovic.

“I felt pretty confident on my own service games. That’s what I transferred also to the return games,” he said.

“I made two breaks in the right moment I would say.”

Thiem booked a meeting with 18th-seeded Gael Monfils of France, who defeated Philipp Kohlschreiber 6-0, 6-2 in 57 minutes a day after the German stunned world number one Novak Djokovic in the third round.