De Kock hits another half century as S.Africa inch closer to series sweep 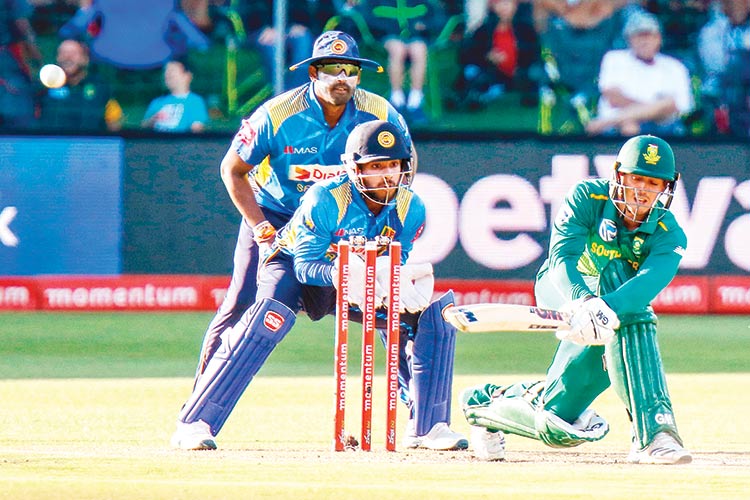 The wicketkeeper-batsman made 51 off 57 balls in a successful chase of 190 after the tourist were bundled out with more than 10 overs remaining in Port Elizabeth on Wednesday.

That half-century followed De Kock’s previous scores of 121, 94 and 81 in the series, and the left-hander has now passed fifty in eight of his past nine knocks across all formats as the Proteas cruised home inside 33 overs.

Sri Lanka, trailing 3-0 in the five-match series, faced humiliation when Udana walked in with his team reeling at 97 for seven after being sent in on what looked a good batting pitch.

But Udana, who has hit two centuries in first-class cricket, struck the ball cleanly in a 57-ball innings which included seven fours and four sixes.

Udana was particularly severe on fast bowler Anrich Nortje, one of the main destroyers in the early part of the innings.

Nortje took three for 19 in six overs in his first spell but the first three balls of his second spell were all hit for six by Udana, who plundered 37 runs off Nortje’s last two overs.

The last wicket yielded 58 runs, 55 of them to Udana. There were three extras while last man Kasun Rajitha made nought not out.

Meanwhile, veteran batsman Hashim Amla has pulled out of the South African ODI squad to play Sri Lanka for family reasons, granting a reprieve for opener Reeza Hendricks who had been dropped for the final two matches of the series.

“Hashim has asked to be excused from the last two ODIs of the current series on compassionate grounds since his father is critically ill,” Proteas team manager Mohammed Moosajee confirmed in a statement on Tuesday.

Hendricks played as an opener in the first three games of the series, all won by South Africa, but managed scores of only 1, 29 and 4, dealing a blow to his chances of making the squad for the World Cup in England and Wales starting in late May.